Things get tricky here. Let us help you with the most awkward puzzle in The Last Guardian. 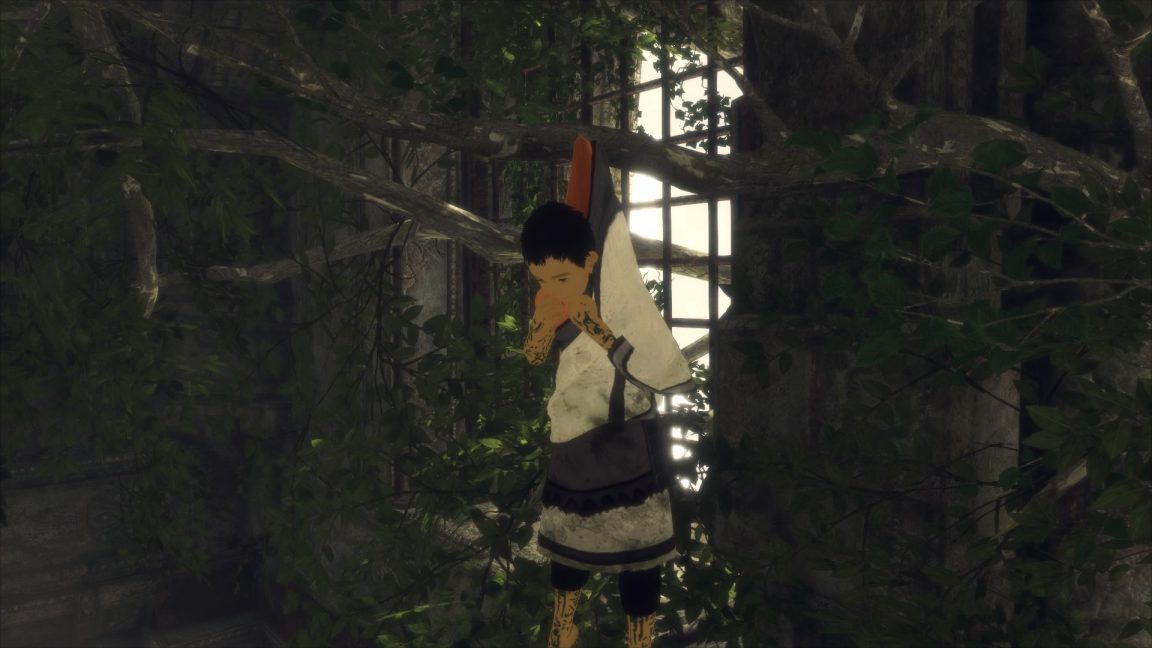 How to get out of the tree

There you are, hanging from a tree. Kick and scream a lot and Trico will eventually come and rescue you. Be patient but also vocal. 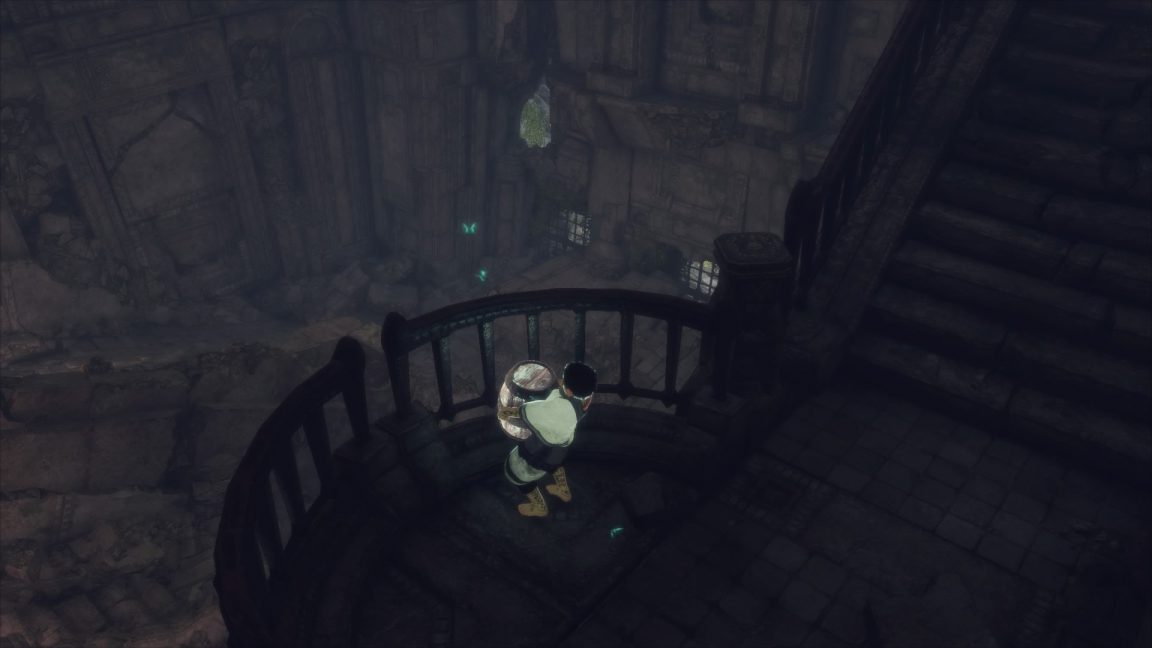 Now at the bottom you need to find food. You're in a chamber from earlier (the one with the blue pot) and looking through the two grills you'll see a barrel. Climb up through the gap on the right, and into the next chamber. You'll have to throw the barrel onto the rubble as you work your way up to the barred doors at the top balcony, so throw, jump quickly, and pick it up before it has a chance to roll off. 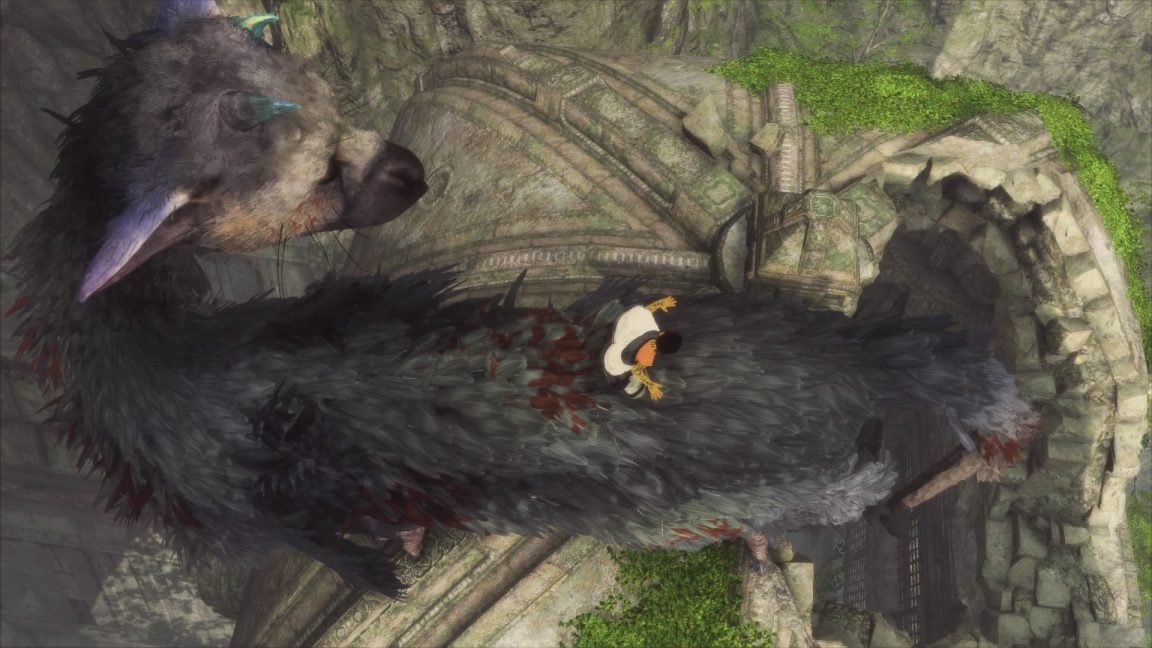 Feed the barrel to Trico, jump on, and it will take four massive leaps up and out the roof. 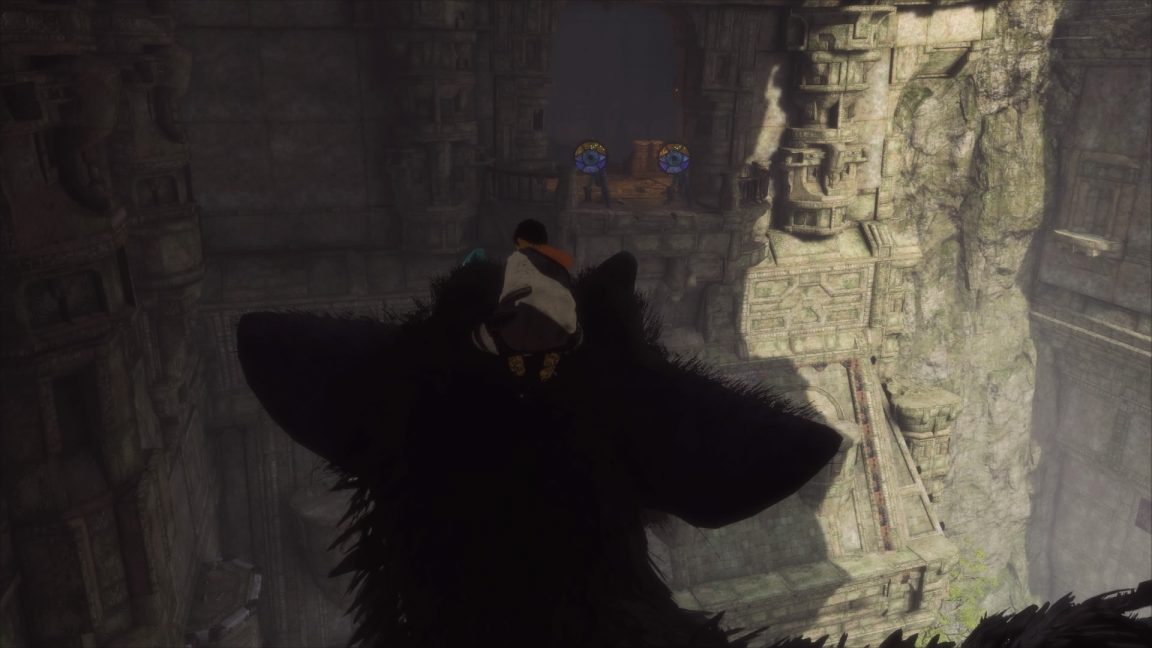 You'll have to encourage it to jump to the next two pillars, and then you'll be facing two guards holding glass eyes. Climb down Trico's tail, and make you way around the ledge here, underneath the guards, and around the corner to a window to a new room. 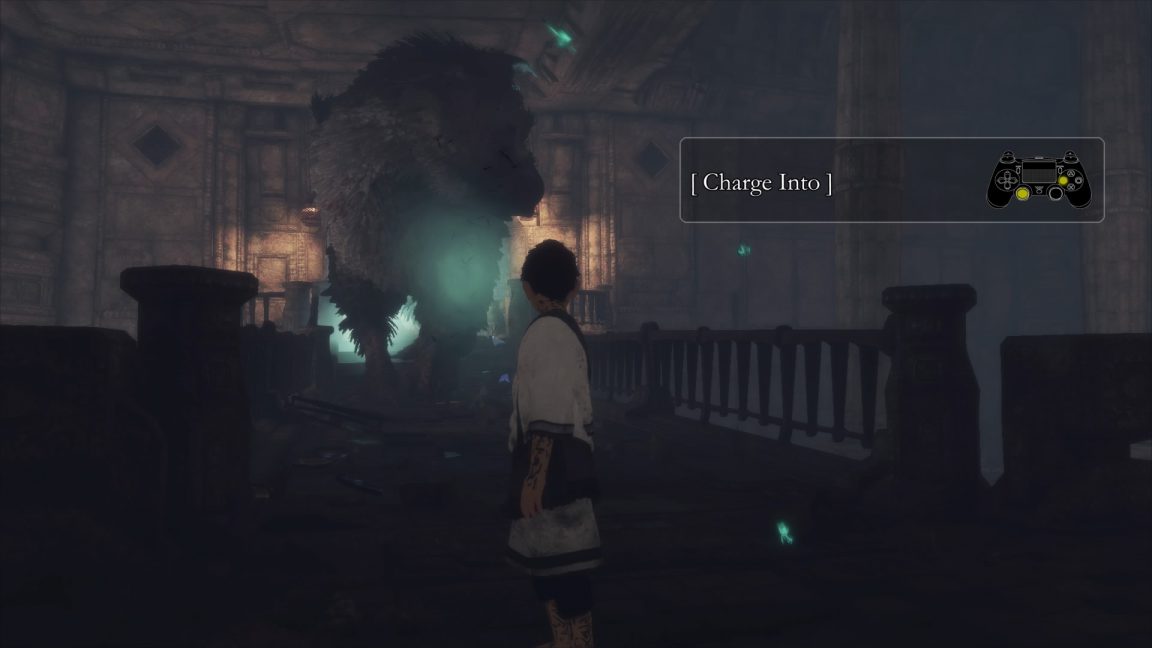 There are more guards here, but it turns out you have a new move: by pressing circle and a direction you can charge into enemies (or kind of do a forward roll). Run past the regular suits of armour, and up to the two holding glass eyes. Charge into them and they'll drop the eyes. Trico will jump across and batter them to pieces. 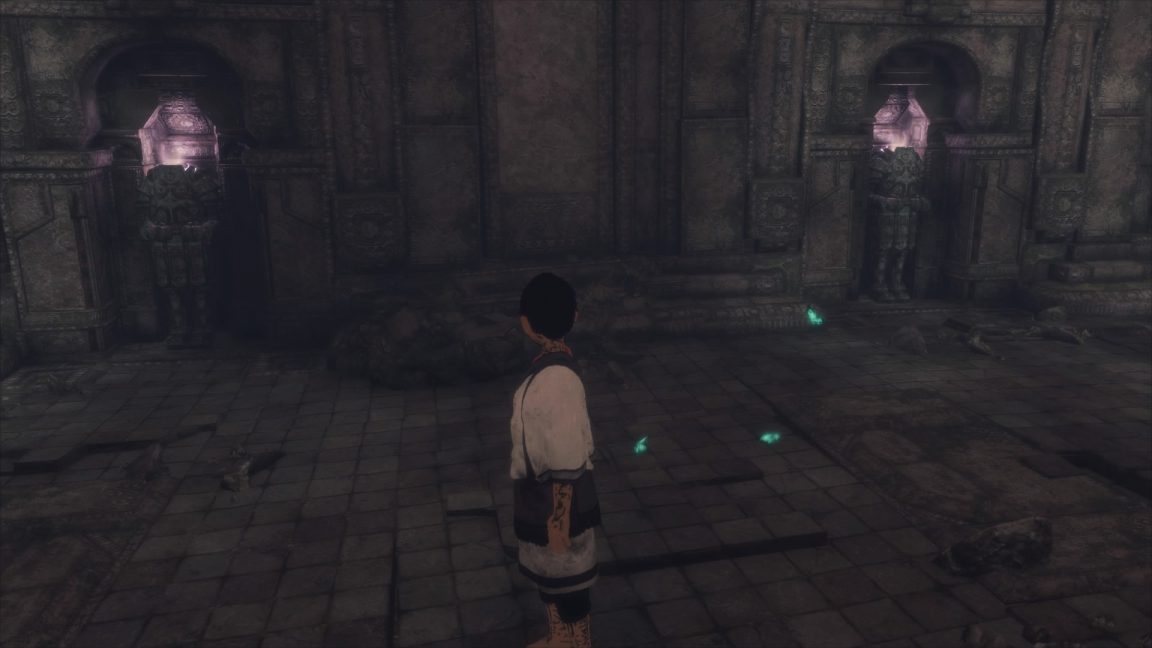 Around the next corner is a recess with headless suits of armour. Climb Trico and opposite them you'll find a large window to jump through. Command Trico to keep jumping until you're back in the building and the gate falls. 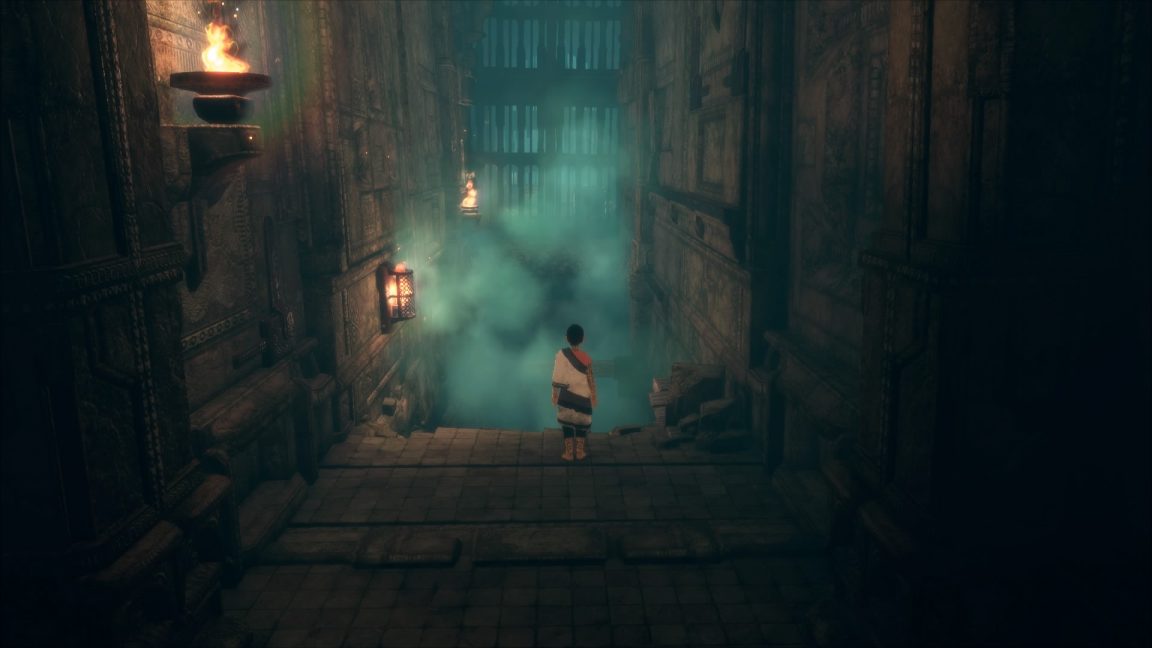 Pull the lever to open the gate and follow Trico, who's hot on the scent of that weird blue smoke again. 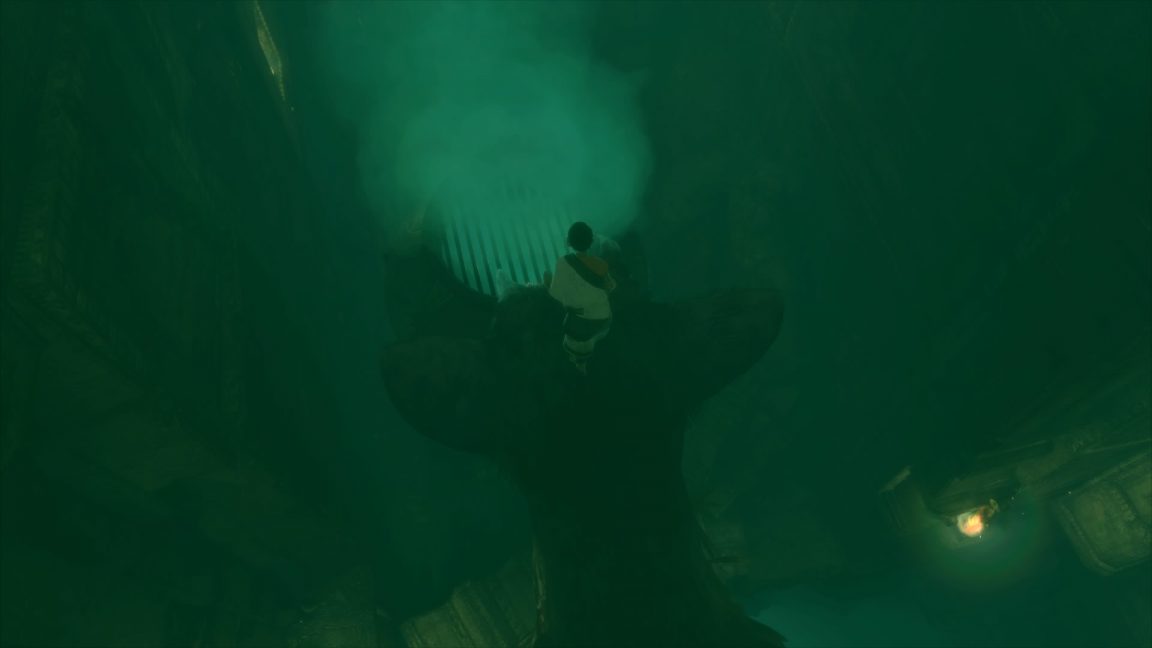 You'll have to clamber along a ledge and then drop down onto Trico's back, where it's getting its fill of smoke. 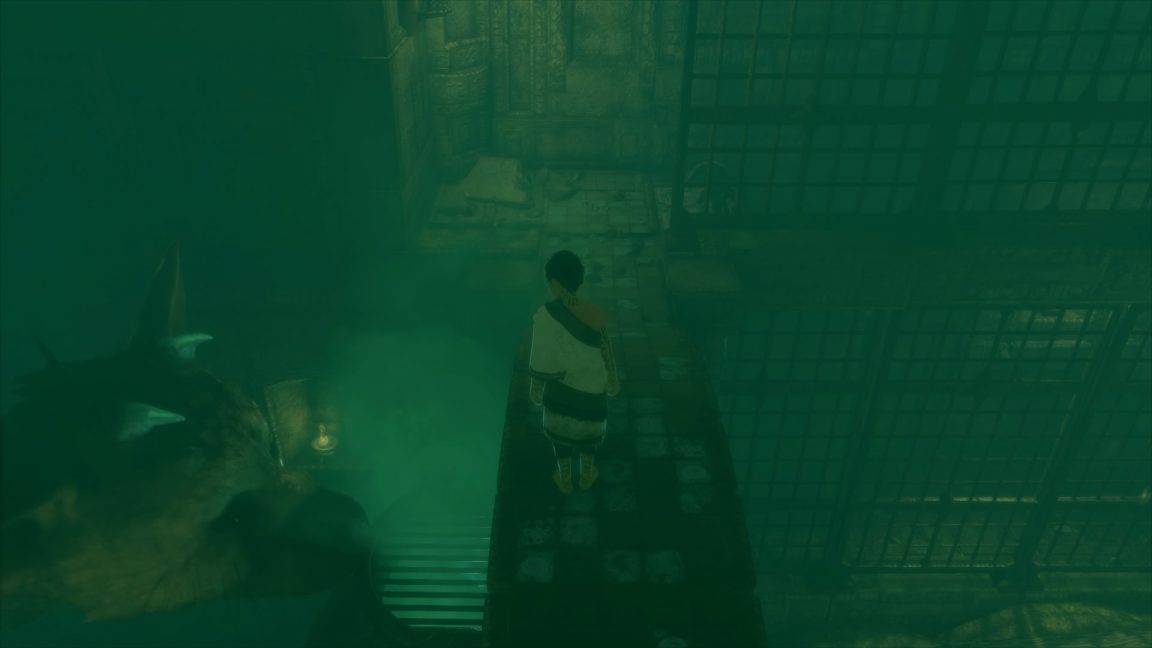 Jump from Trico onto the little bridge in front of you, and pull the lever down to change the direction of the track. Now push the pot on wheels forward until the floor collapses.

How to get out of the water cave 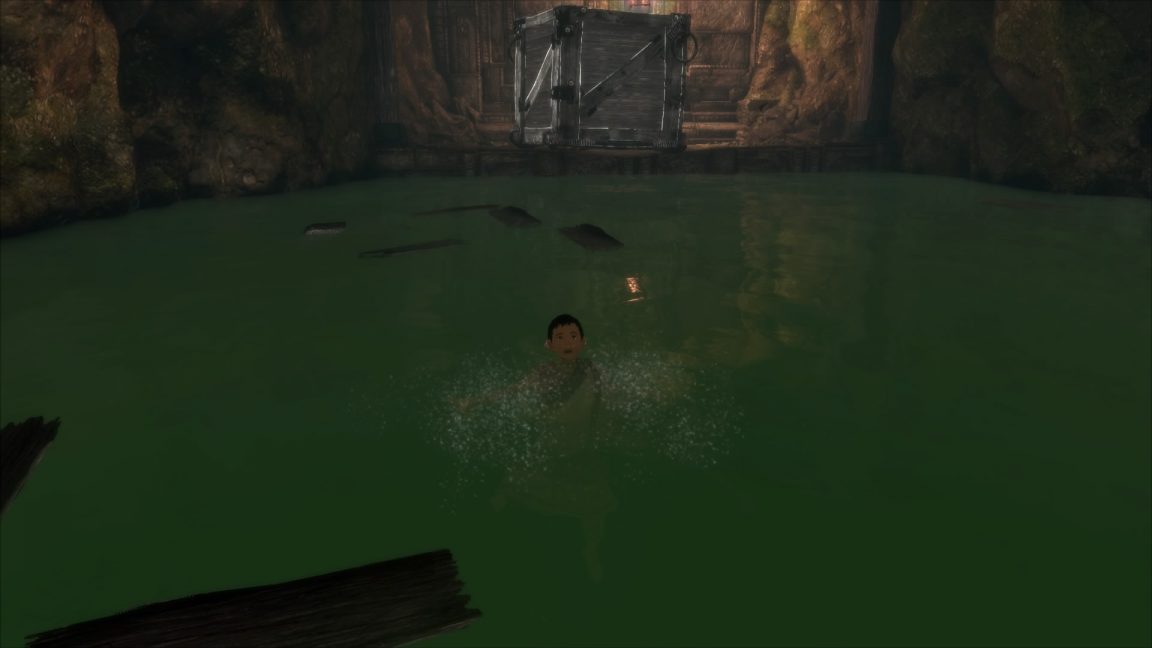 You'll land in a cave below, filled with water. This is without doubt the awkwardest problem in the game. From the dry stone platform, you need to push the crate into the water and then all the way over to the far right hand wooden pillar. Stand on it, and call Trico, who will eventually smash a bigger gap in the ceiling and drop its tail for you to climb up. 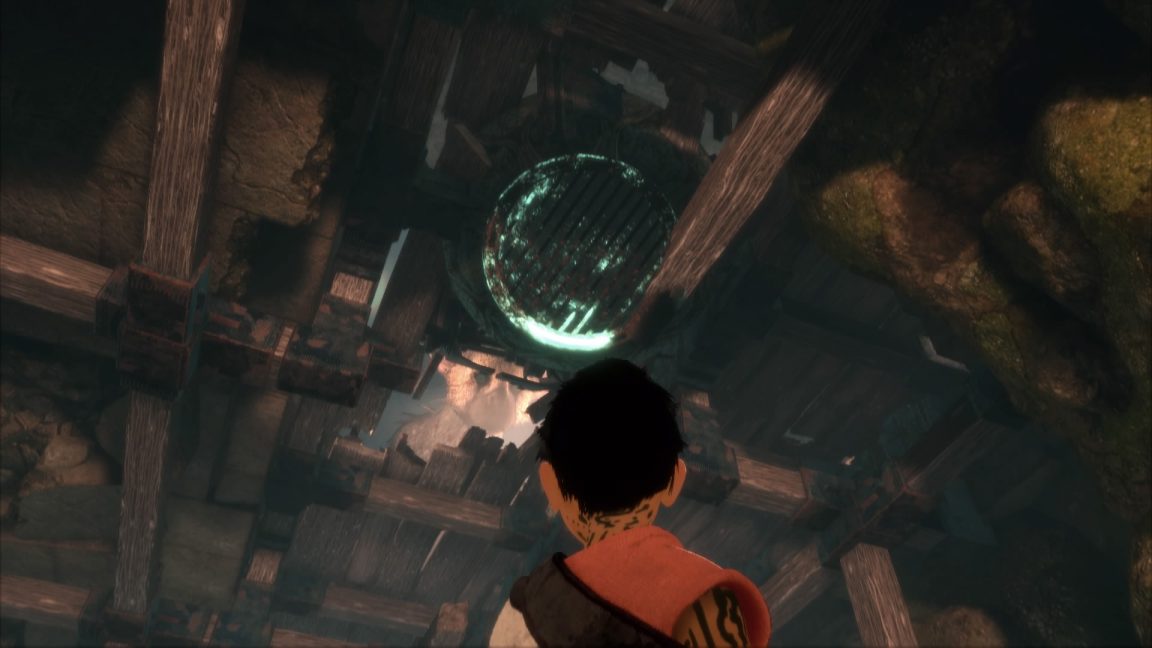 If the you stand anywhere else Trico doesn't smash another hole in the floor, and won't lower its tail. This seems to be very much about trial and error, so be patient and stick with it. 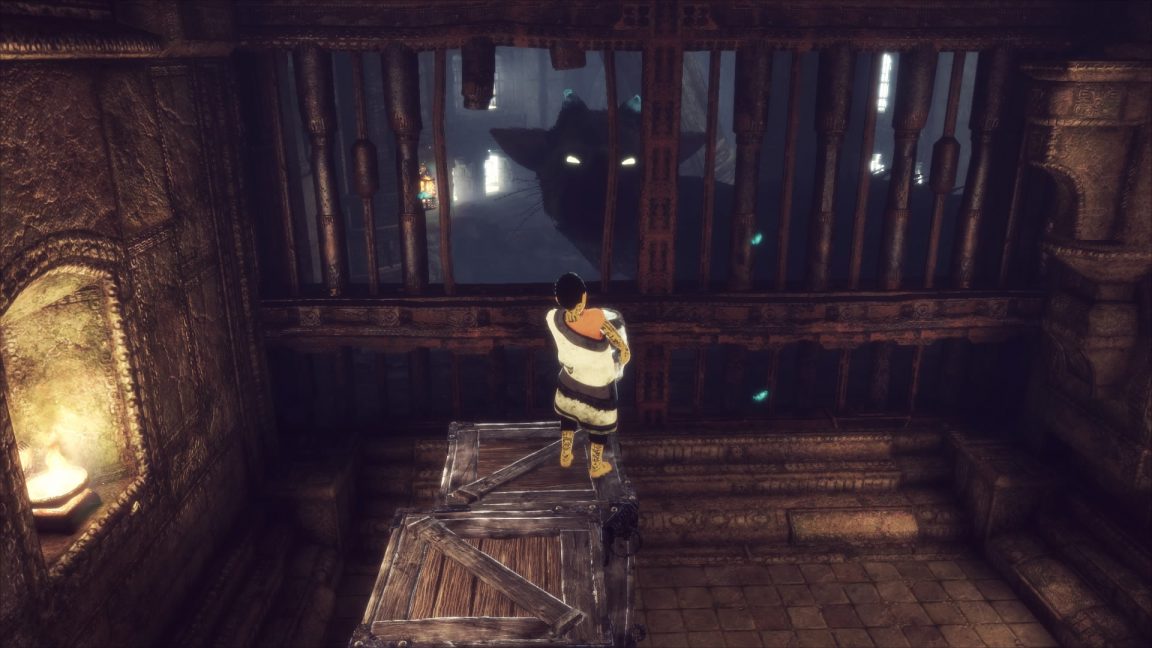 Once out of the water cave, climb onto Trico's back, where it will jump up to the next area and stomp out a couple of guards. While Trico does that, climb through the missing bar in the gate here, push the two crates together and throw the barrel up on top. Then toss it through for Trico to eat. 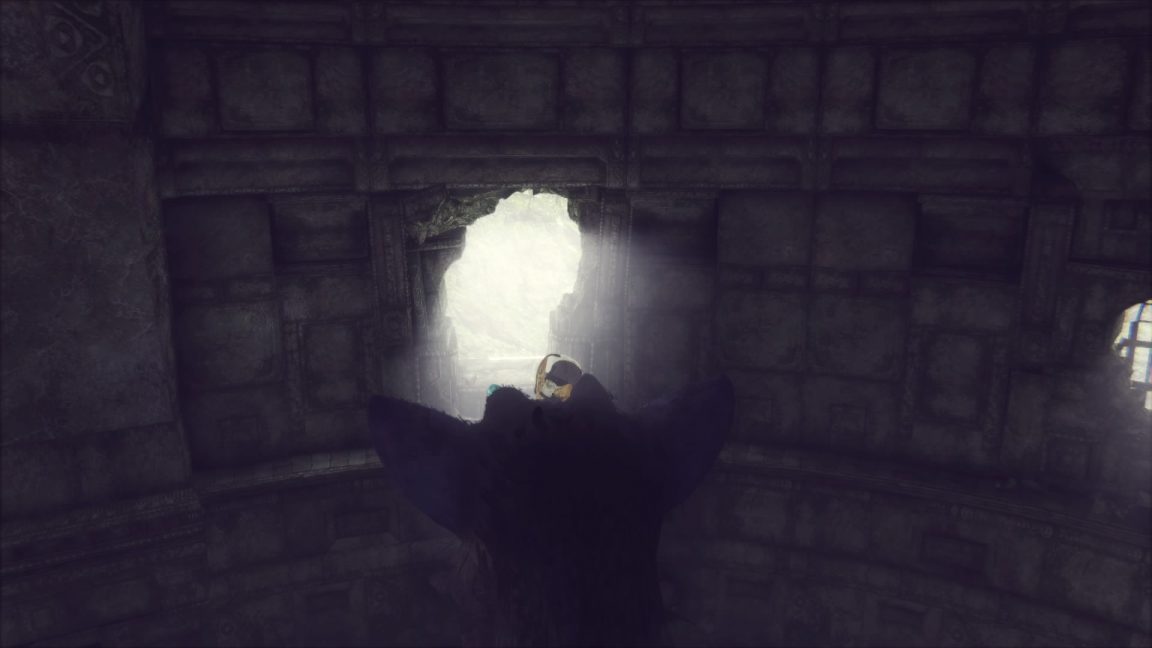 Head over to the locked double doors and onto Trico's back. You can climb up to a window without bars here. 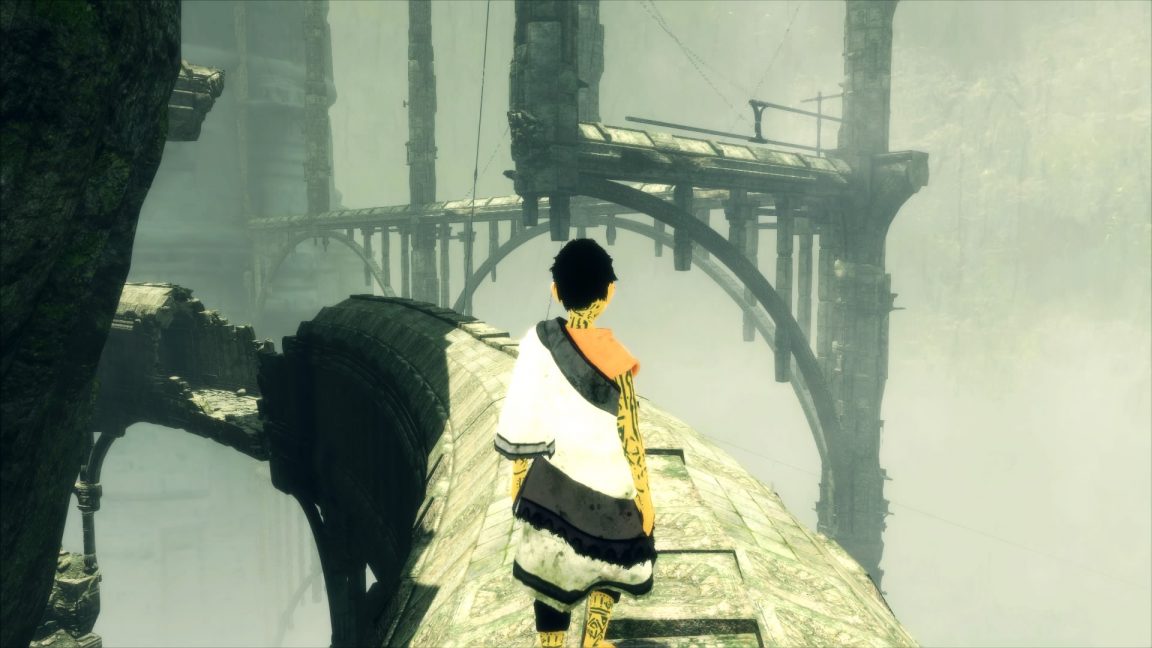 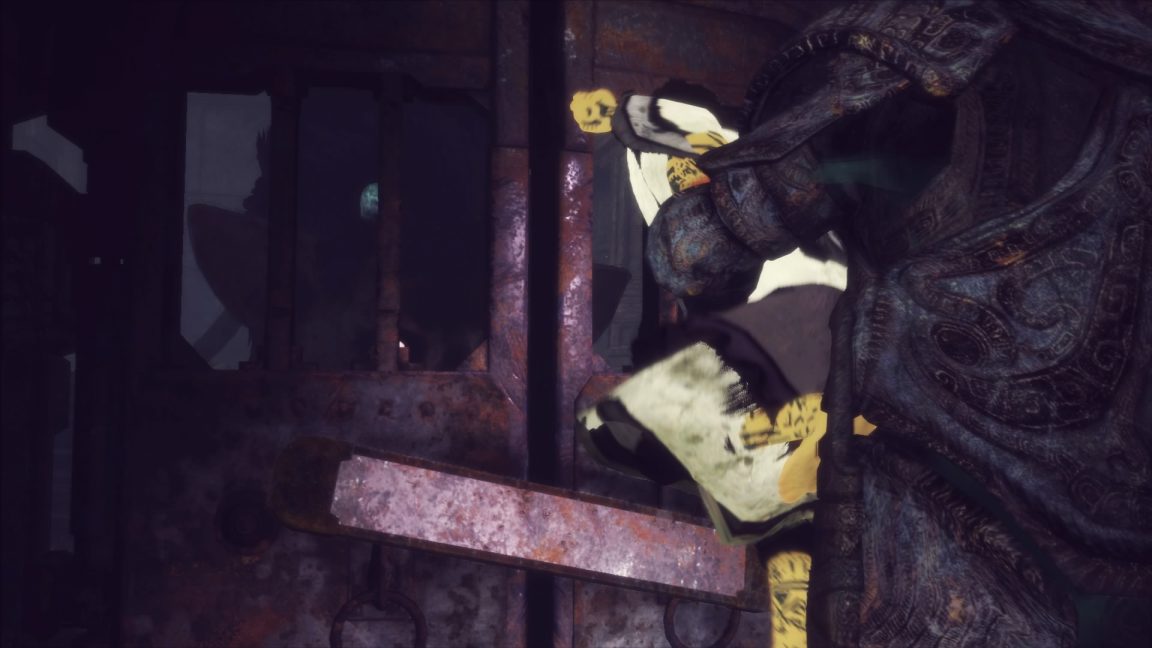 Guards will come alive, but just jump and run back to Trico and lift the bars. Trico bursts through and you have no option but to run like the wind. 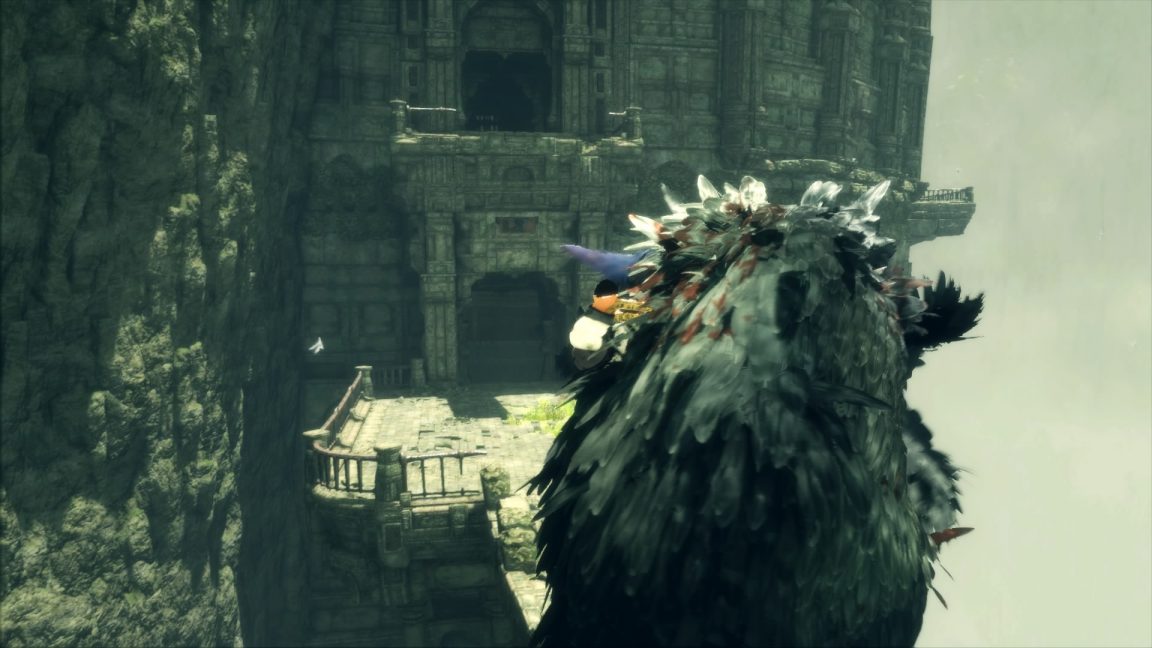 Once on a safe-ish ledge, give Trico the jump command to work its way around the ledge and outside a new opening.

Next - Part 12: the cart catapult, how to get Trico to swim, solve all water puzzles