If you're trying to pre-load Forza 7 on PC so you can be ready for launch, there's a decent chance your download will halt at some random point midway through, prompting you to start over.

The official Forza Twitter account has finally issued a statement confirming that Turn 10 is aware of the problem, and is working with the Windows Store team to investigate and fix the issue.

We are aware that certain players are experiencing issues pre-downloading “Forza Motorsport 7” on Windows 10 PCs. We’re actively working with the Windows Store team to investigate and resolve as quickly as possible.

With the game unlocking at midnight tonight for Ultimate Edition owners, it's probably best to resume the download then.

Original story: Many of those who pre-ordered Forza 7 - myself included - have run into a number of issues that stop the pre-load after some gigabytes have been downloaded. Sometimes this can be 15GB, 50GB, or 92GB.

The Windows Store spits out an error code, and when this happens, resuming the download does not in fact pick up from where it left off - it restarts the whole thing from the top. With Forza 7 on PC, this means re-downloading close to 100GB of data. The issue is so widespread, it's the only thing people are talking about now on the Forza Reddit, and the official forums.

This is what the first page of the Forza 7 technical support subforum looks like at the time of writing: 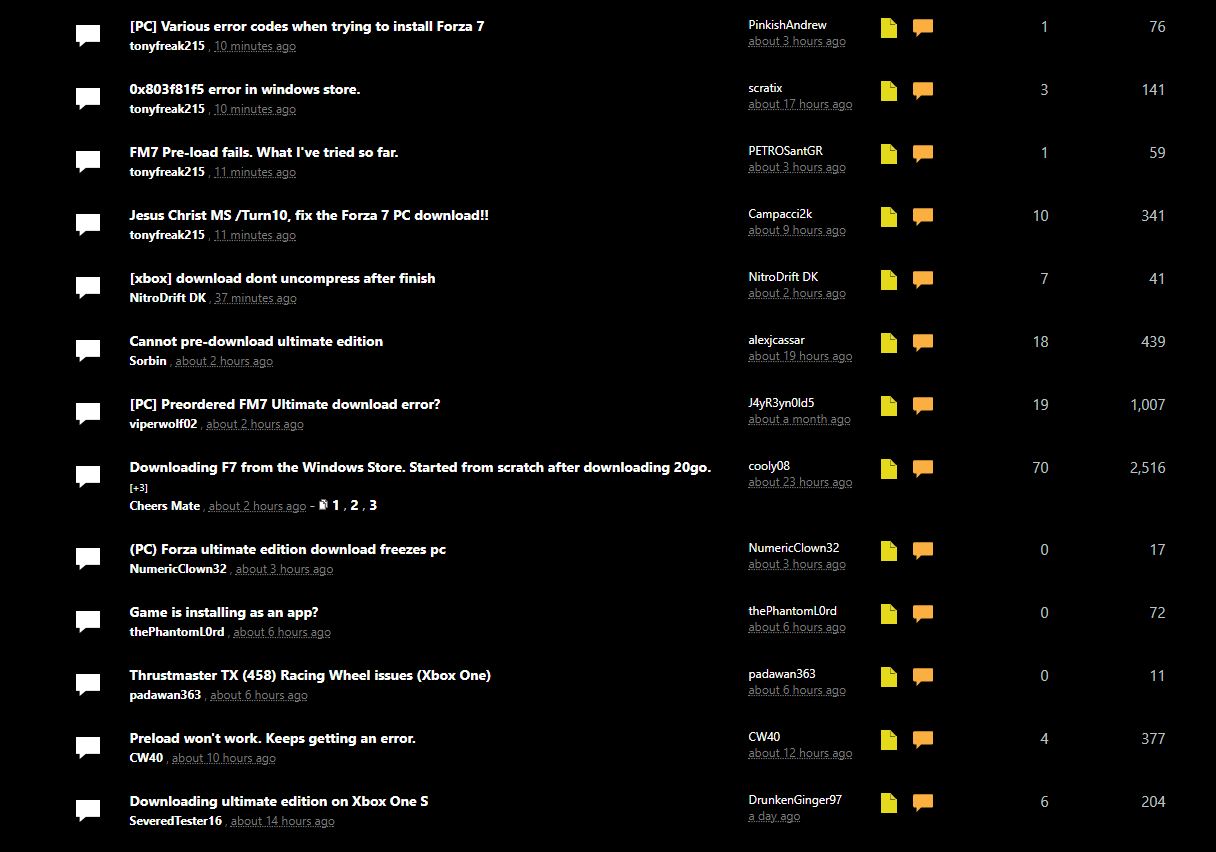 In every one of these threads, you'll find horror stories of players who have to contend with data caps on one end, and the Store's frustrating incompetence on another. Never mind that many don't have internet speeds fast enough to download 100GB in a reasonable amount of time.

Some have had luck with uninstalling all content, logging out of the store and back in to restart the download. Others suggested resetting the Windows Store cache by pressing the Windows key + R and typing "wsreset". The bigger issue is that there's no clear idea what causes this problem, so it's all just a shot in the dark.

What's puzzling is that Forza Horizon 3, and Gears of War 4 had an identical problem at launch last year, to the point that Microsoft had to push an update to Windows 10 to fix it. How is it that the next time this happens is with another Forza game a year later?

It's incomprehensible that the Windows Store continues to fail at the simple task of delivering game files to customers. For all the hate they get, Origin and Uplay never had this problem, even when they were first released.