The Division 2 is full of many different systems, and unique mechanics, but the game doesn't tell you everything in a tutorial.

In our time playing The Division 2, we’ve been learning a lot about how these different systems work, and uncovering neat quirks we didn't even know existed.

Despite being a sequel, The Division 2 does away with a lot of what was introduced in the first game. This can be as simple as turning attachments into unlockable perks, to more complex systems such as how the game calculates damage.

If you’ve been spending time with The Division 2, or have yet to jump in, you’ll find plenty in this page you probably didn’t know about. There are plenty of early, and even advanced tips online, but here's what most missed.

We’ll update this guide as we uncover more. Here's what we have for now: 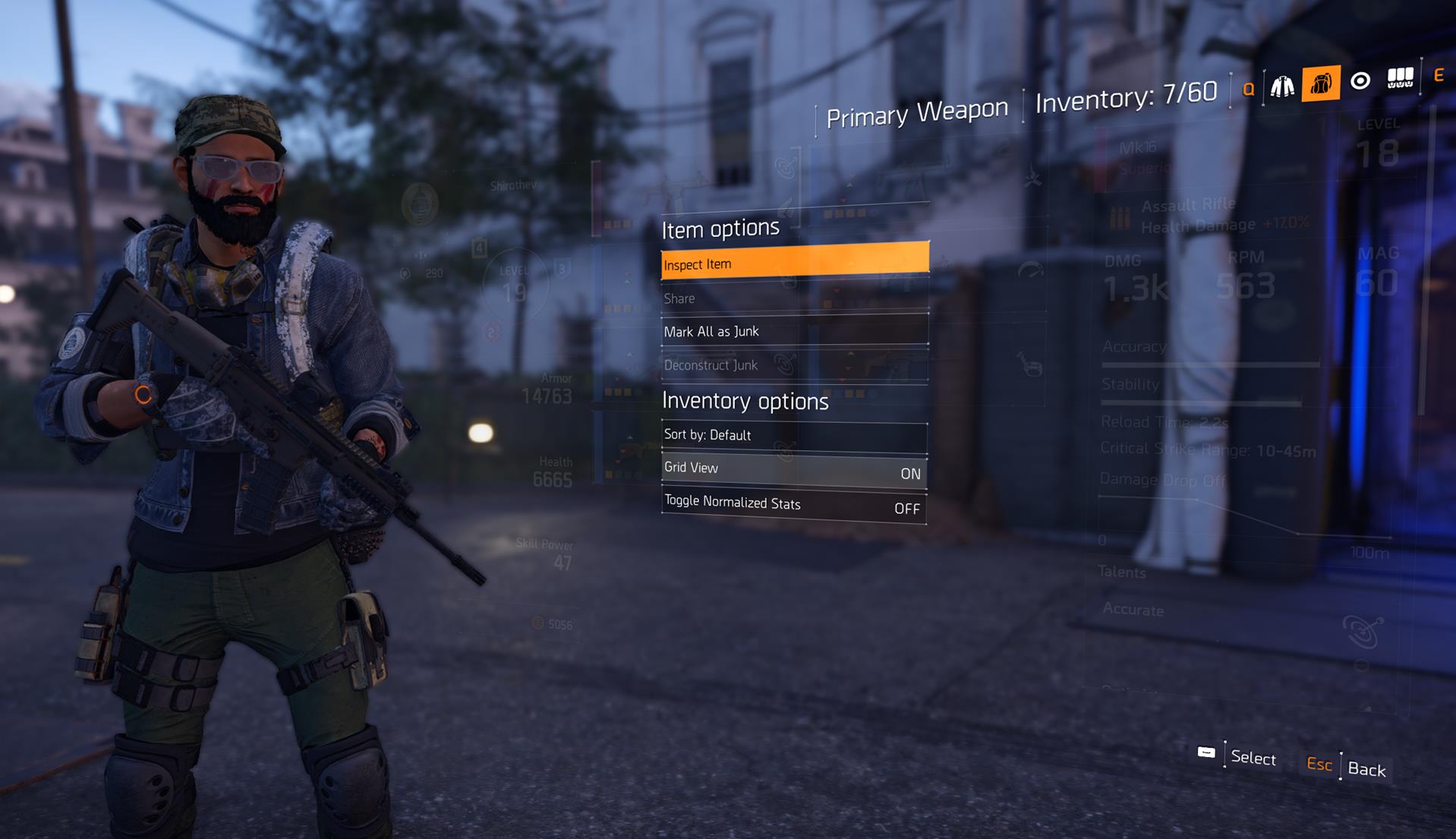 Switch your inventory view to grid

The Division 2’s UI is a big improvement over the original – if you ignore the arbitrary need for double-clicking on PC. The inventory menu uses the same design on all platforms, but you can make browsing the individual sections easier.

You can toggle on a grid view of the inventory, which will replace the long list with a shorter, better-organised grid. This can be done by pressing X (Options) on PC, or picking the same option on consoles.

Keep in mind that the option will only appear when you’re viewing individual sections of the inventory (such as weapons), not the main screen. The change, however, will apply to all sections.

As your inventory space grows, you’ll be able to carry a lot more gear, and weapons. Nobody wants to spend minutes scrolling through a list of 10 weapons to find the good one.

A grid view makes this process easier, especially if you don’t tend to check your inventory every time you get a new item. 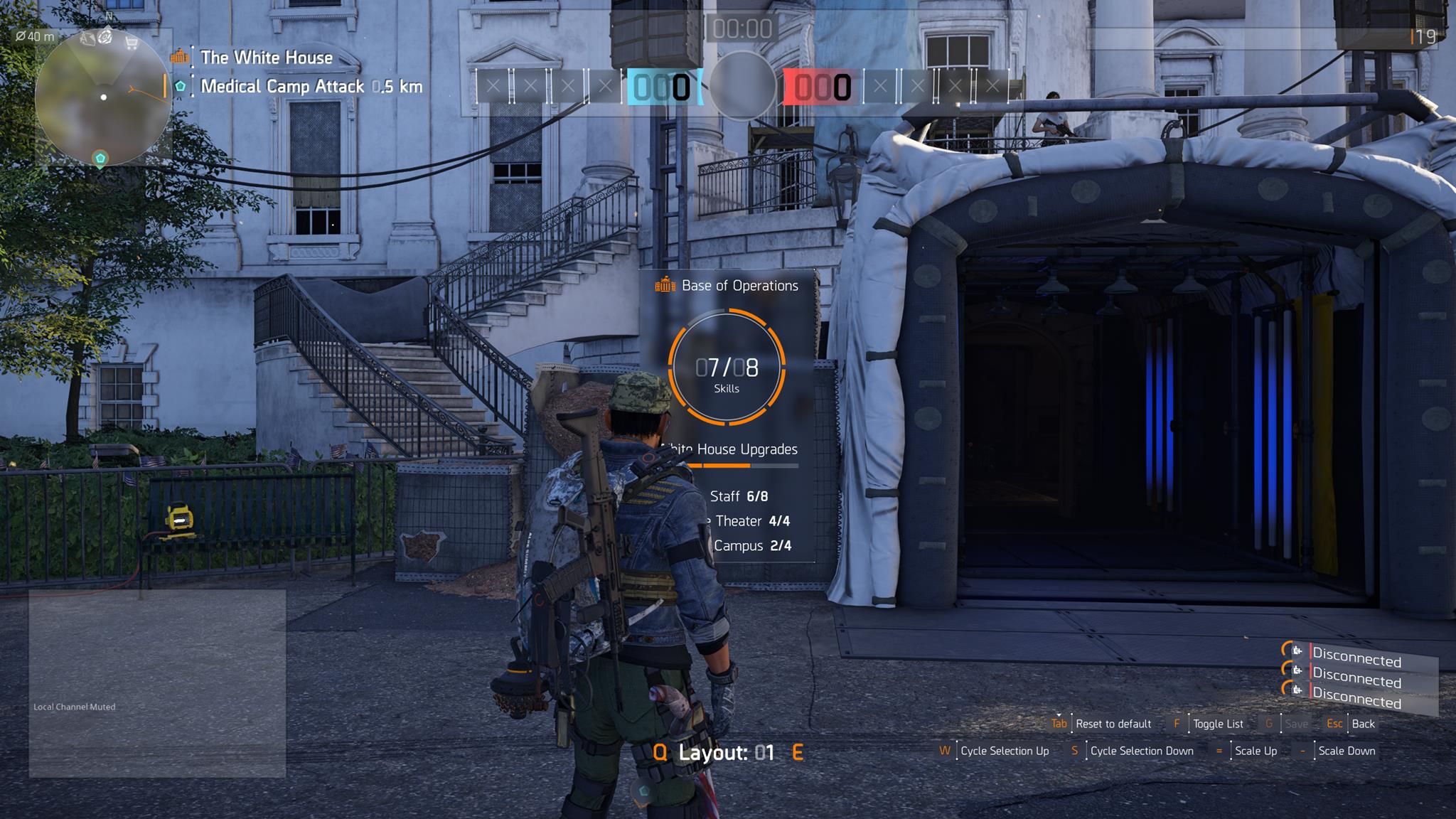 You can customise your HUD

While we’re on the subject of improving the usability of The Division 2 menus, you should play around with the game’s HUD customisation settings. The Division 2 lets you move the different HUD elements such as the XP bar, minimap, and the score tracker in multiplayer around – with some limitations.

You can also resize the various elements themselves, which is a good idea for the minimap since it can better alert you to danger.

You can do this through the UI menu under Settings. From there, pick Customise HUD and see what you can do. You can even save several layouts, which is useful if you alternate between playing at your desk and on TV.

Don’t go too overboard with these tweaks, though, as the game doesn’t scale the font when you enlarge the various HUD elements. 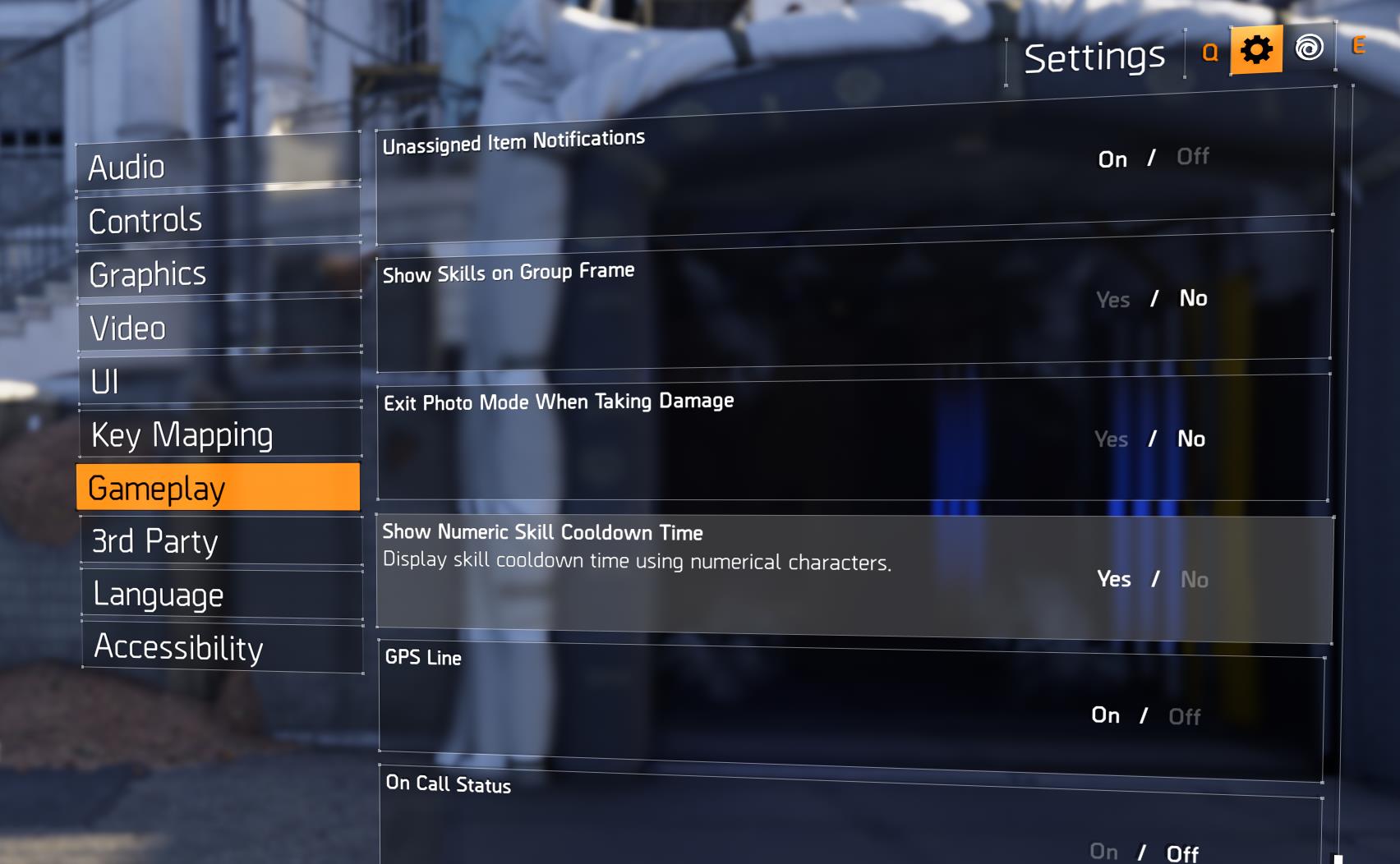 Our final UI customisation tip is very simple. Your skill cooldowns are represented by a loading bar by default. While that’s helpful, you can be more efficient and have the game translate that cooldown to an actual number.

Imagine timing the start of an encounter to the exact second your offensive skill becomes ready, or being able to tell - at a glance – if it’s worth going for a risky revive.

To do this, head to your Settings menu. Under Gameplay, pick Yes under Show Numeric Skill Cooldown Time. 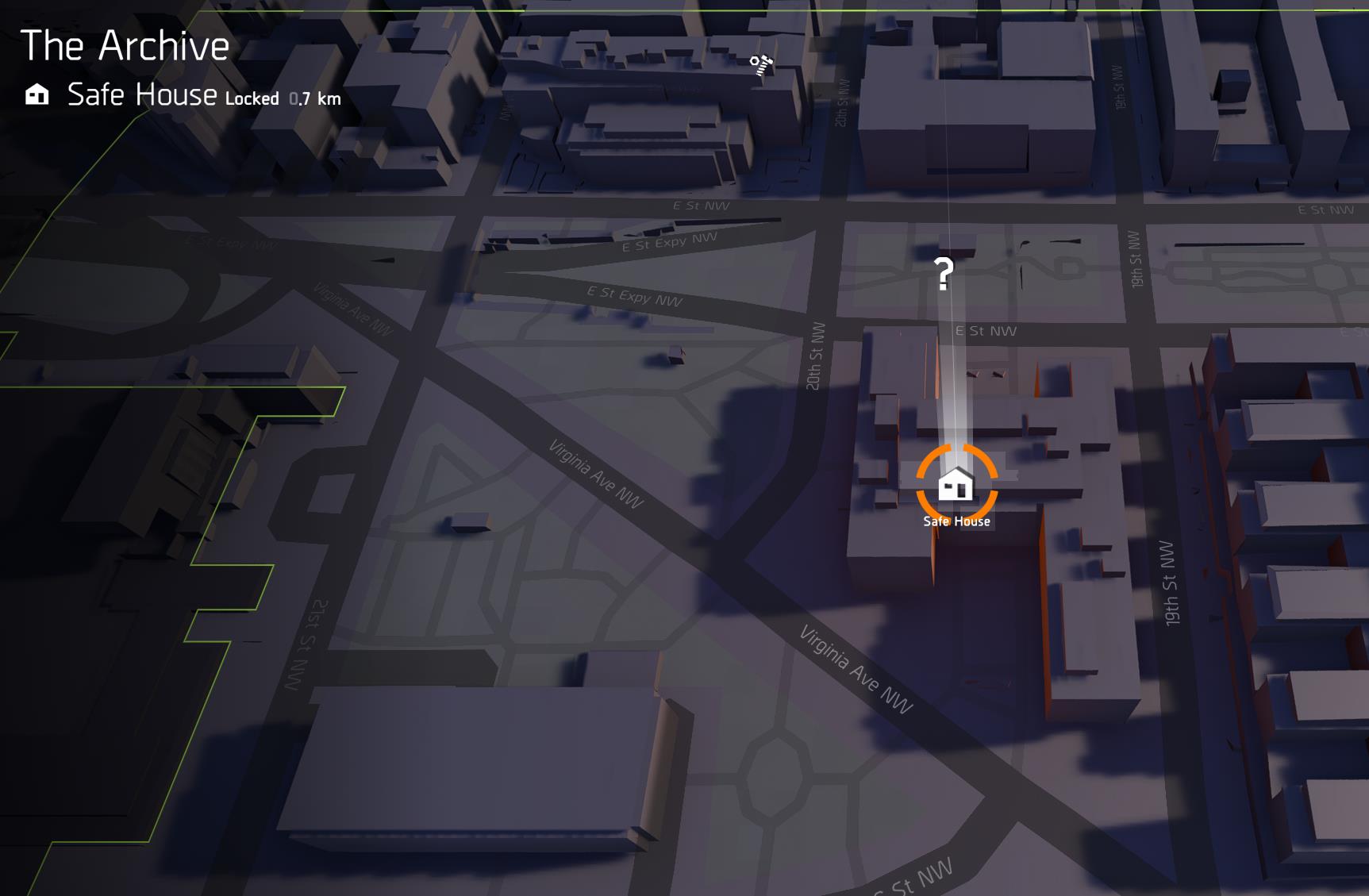 Safe Houses must be unlocked before you can claim SHD caches

The Washington D.C. map of The Division 2 is split into different zones, each intended for players of a certain level. Though the environments and factions are different between them, one thing remains the same: they all have SHD Tech caches.

As you probably know by now, SHD Tech is used to purchase perks at the Quartermaster, as well as unlock the various Skill variants. The only problem is, if you find these caches organically, you won’t be able to open them.

You need to first visit the zone’s Safe House and reveal all points of interest in that zone. Doing this not only populates the map with plenty of activities for you to take part in, it’ll also let you unlock SHD Tech caches in the zone.

Traveling to a Safe House and interacting with the object inside the room (hard driver etc.) is the first thing you should do upon entering a new zone. An orange Safe House icon (unlocked) is one you previously visited, a grey one (locked) is one you didn’t. Use that to decide which to hit first. 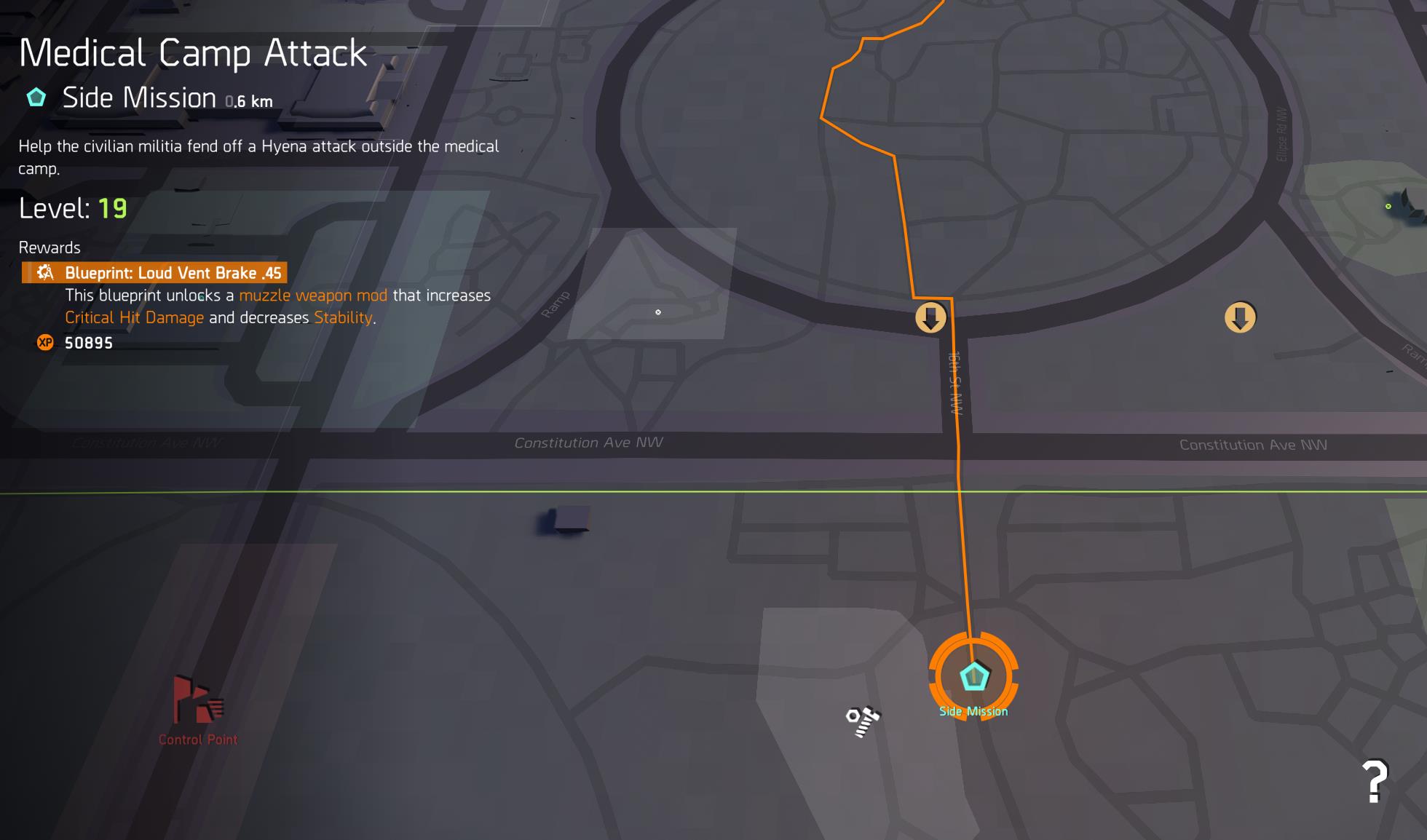 Not all weapon attachments can be unlocked

The Perks tab at the Quartermaster has a couple of sections for weapon modifications such as sights, magazines, and barrel attachments. This is a bit misleading, because it leads players to believe that it's the only way to unlock new attachments in The Division 2.

That is not the case. Upon completing certain missions, you’ll unlock blueprints for many more attachments. You can easily see which missions reward attachment blueprints by hovering over the mission icon on the map.

Assuming you already have Inaya al-Khaliq at the White House and her crafting table is accessible, immediately head there to see if you have any mods to craft. Unlike weapons, and gear, you only need to craft the various mods once.

Some of the best attachments, such as extended magazines, are only craftable via these blueprints, so check back regularly to see if you have access to new ones. 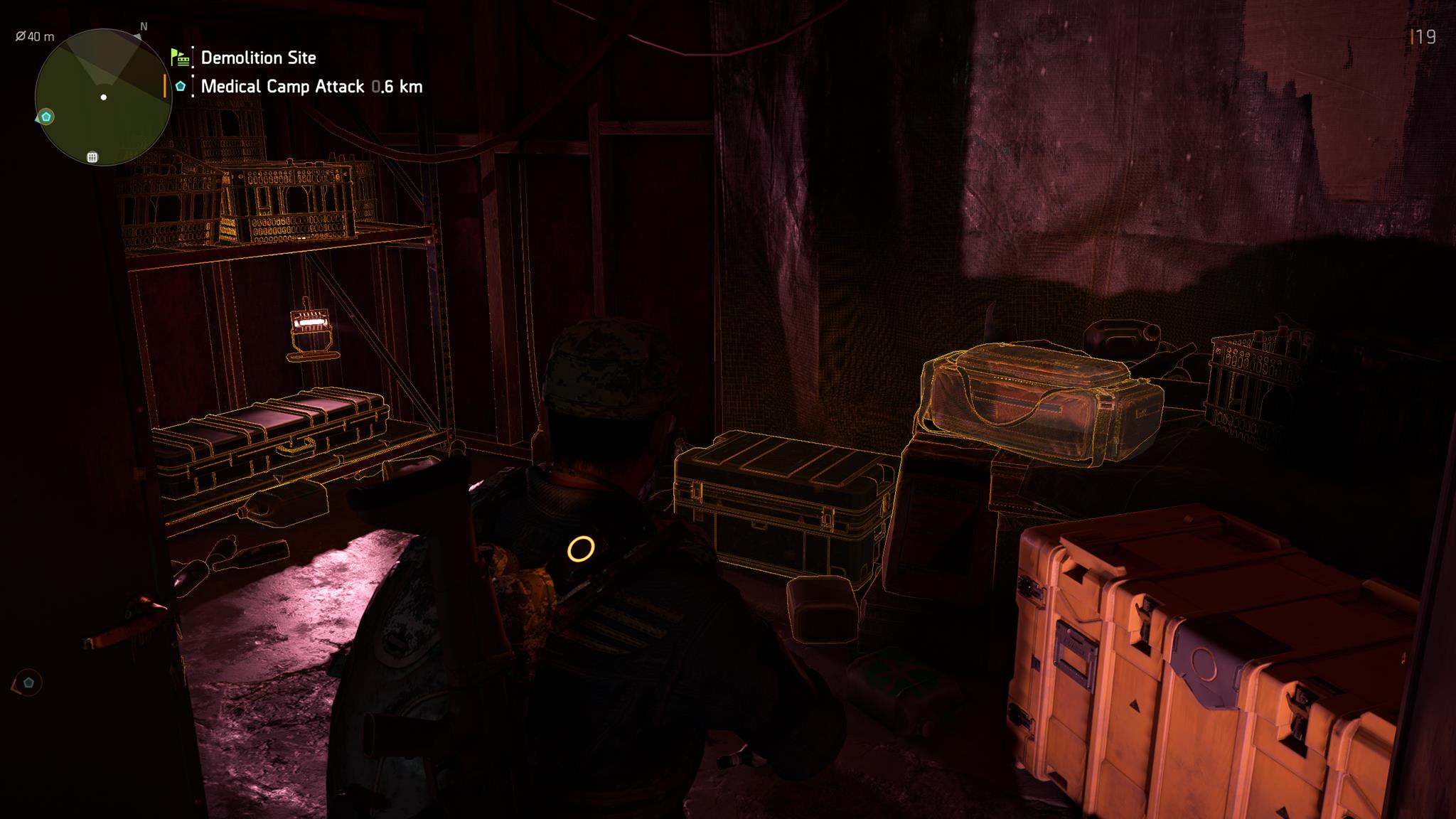 Control Points in The Division 2 are short side activities you can engage in while exploring the world. With the help of AI teammates (which you can call in), you can claim the point for the good guys.

The first time you capture a Control Point and kill its leader, you’ll receive a key to a supply room. These hide a treasure trove of chests, full of loot. What you may not know is that these cases, with the exception of the biggest one, will repopulate over time.

When you return to a control point to donate supplies, be sure to hit that room again and roll the dice once more. You may get lucky, and even if you don’t, you can always deconstruct or sell the loot.

As a bonus, captured Control Points can be fast travelled to from the map, so you won't even have to make it on foot. 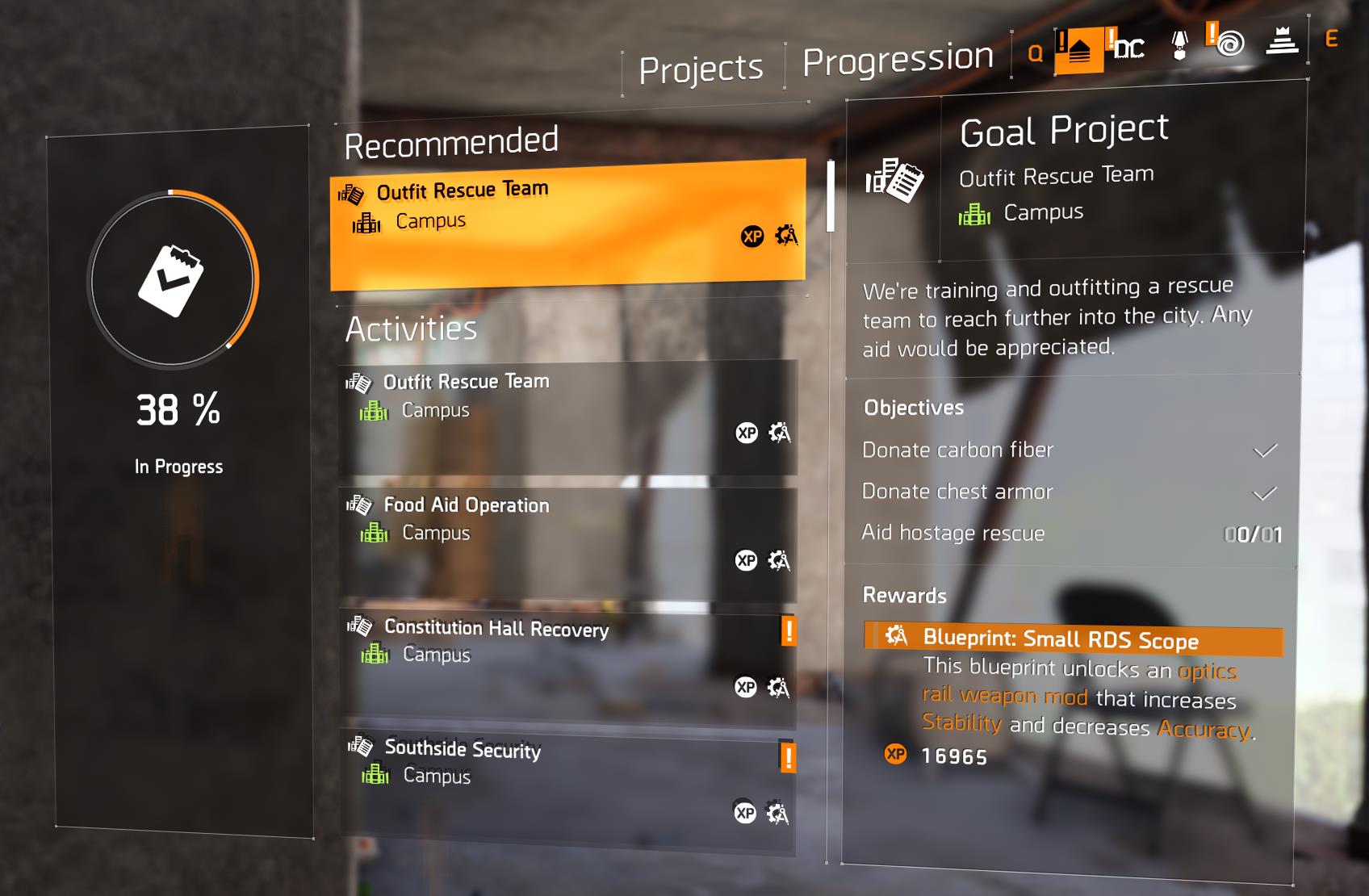 Excess loot is part of the loot shooter experience, and this is no different in The Division 2. If your inventory is getting full of, well, junk you have no use for, don’t immediately get rid of it.

Check to see if any active Project requires a gear piece or two. Most Projects require donations at some stage, so you best keep a few gear pieces in your stash for later. Their level, and quality does not matter.

If you don’t want to clog up your stash with low-level gear, check your currently active Projects under Progression in the pause menu. From there, you’ll be able to see if any of them require some donations.

If you prefer to complete multiple projects at once, you can hit a single button to donate all junk to all projects that need it. This can only be done at any Project Officer, but the prompt won't show up unless at least one active Project requires it. The gear itself, obviously, needs to be tagged as junk. 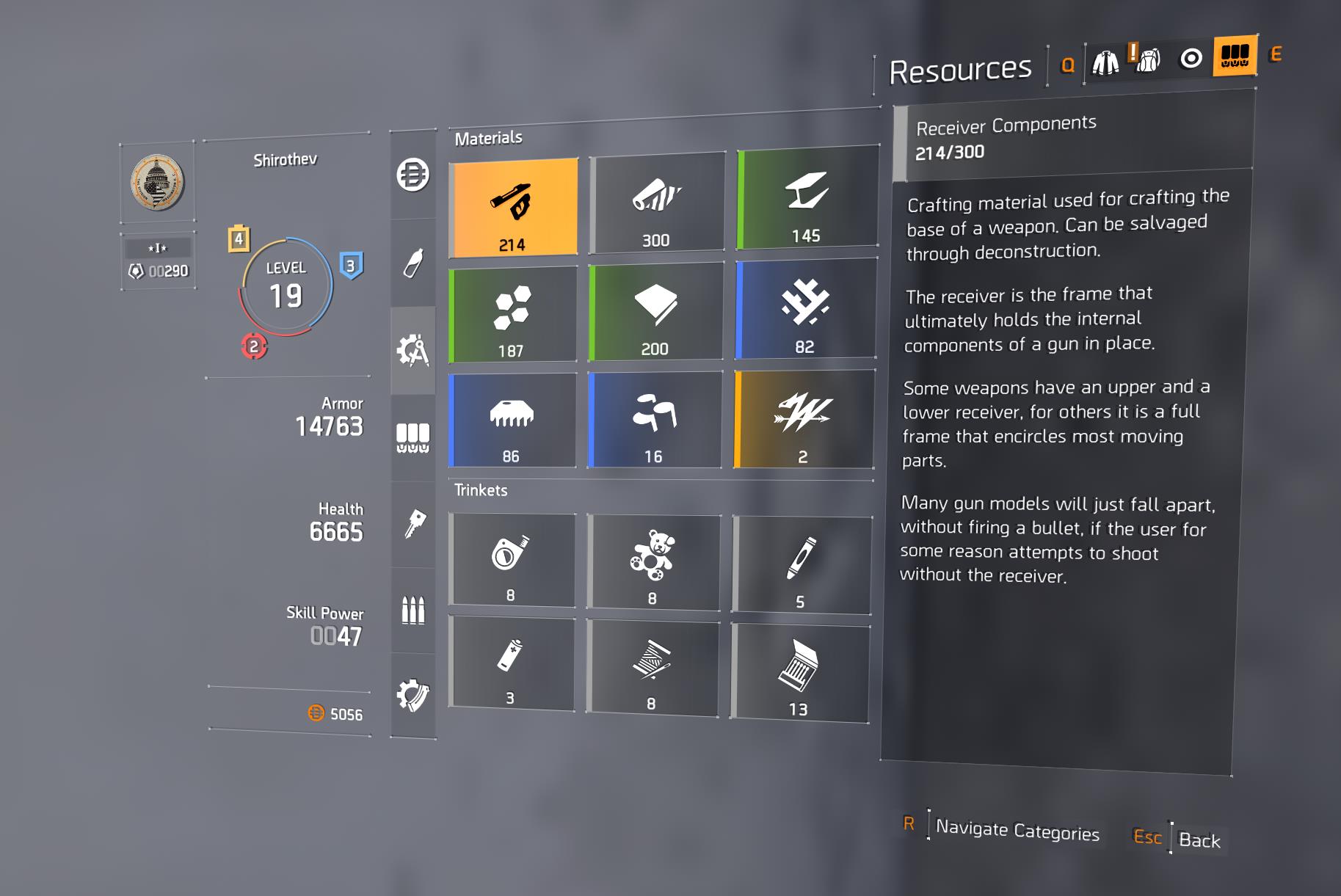 Don’t deconstruct items when your materials inventory is full

As you’ve probably guessed, deconstructing is always better than selling excess loot. While you won’t receive credits for doing so, it'll all go towards topping up your crafting material pools, ready for when you do need to craft something later.

The only problem is, you won’t receive anything if your materials inventory is full. There are several different crafting materials in The Division 2, but the most common ones fill up the earliest. Before deconstructing a large number of gear items or weapons, have a look at your inventory first to see if you’re already full on some of their components.

You’ll often find that to be the case. At that point, you’re free to sell the gear. Bring up your inventory, and navigate to the Resources tab on the far right. From there, you can click the Materials section from the left pane to see what you currently have. 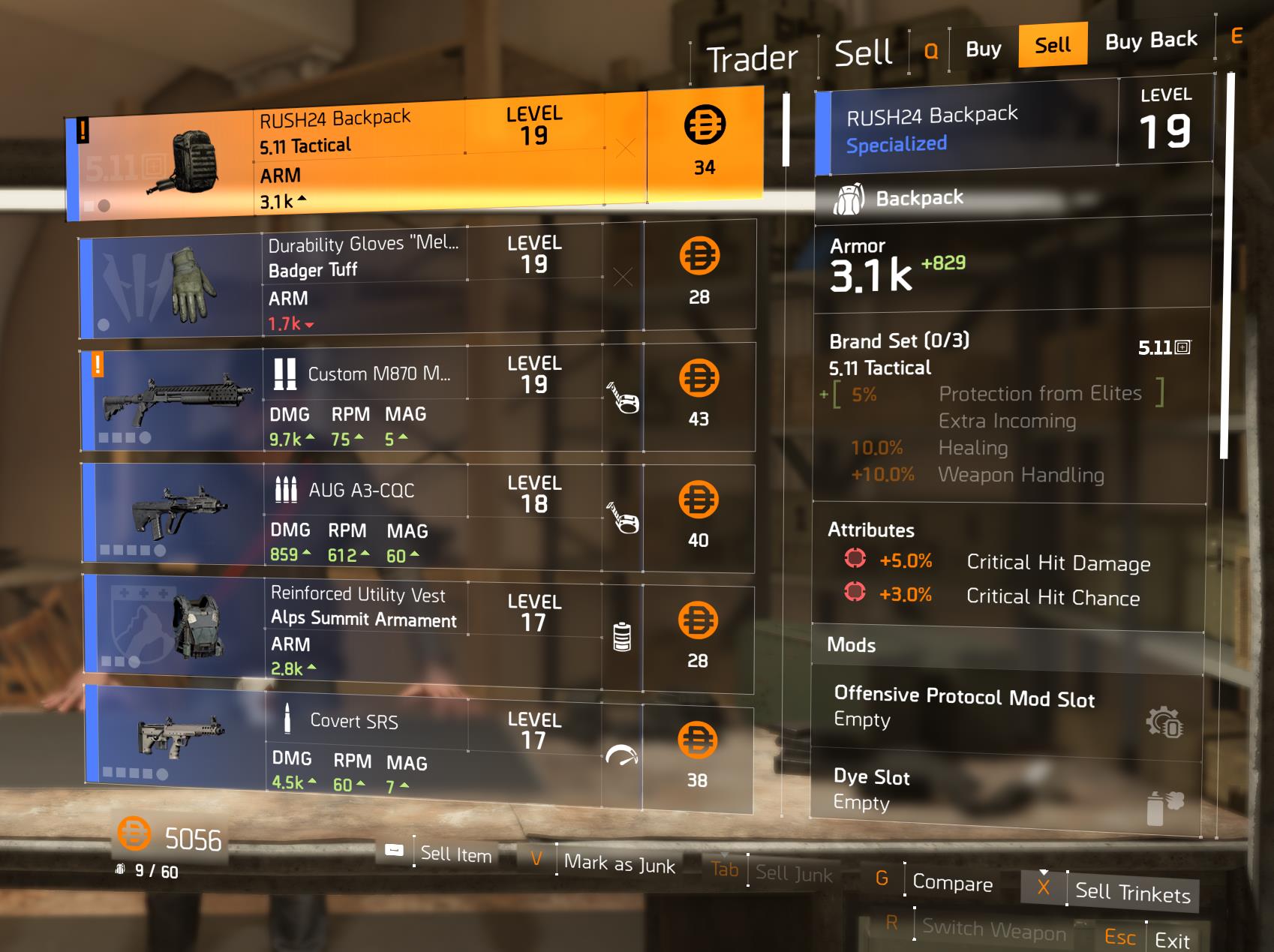 This is another thing The Division 2 doesn't tell you. All the useless tat you've been collecting in your travels can be sold for credits at vendors. When browsing their wares, hit the Sell tab and hold the button listed all the way at the bottom.

On PC, that's X to sell all trinkets. Trinkets won't be listed alongside gear, and weapons, which is why you probably didn't know you could sell them. You can always see the trinkets you have by checking the Trinkets section in the Resources tab. 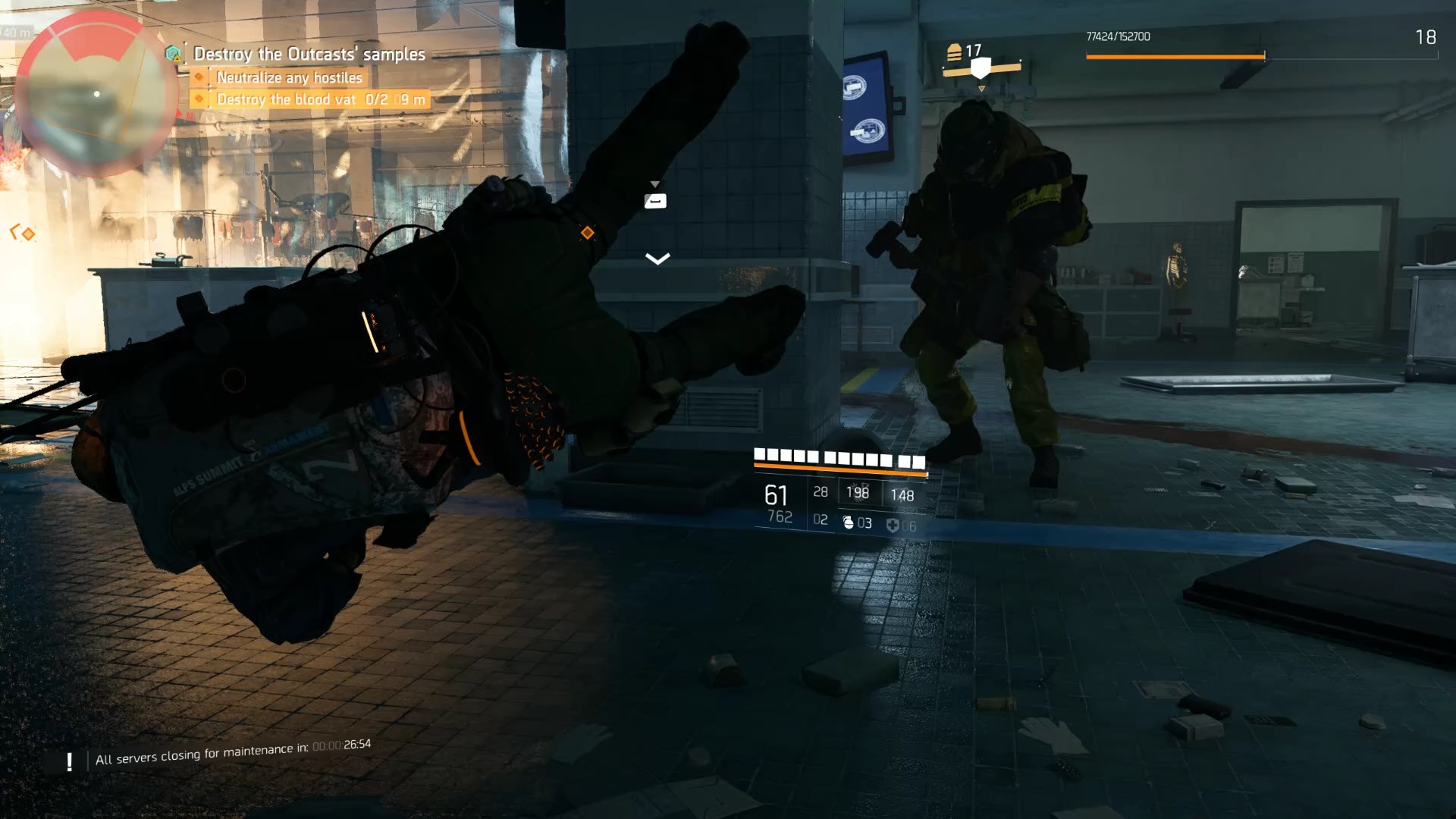 Be mindful of which enemy weak points you’re targeting

It’s always advisable to go for an enemy’s crit point, especially when fighting the Veteran, and Elite bosses. In The Division 2, you can exploit this even further to your advantage.

The bulky, armoured enemies often also carry around a big weapon. If you shoot the belt feeding their weapons, they’ll be forced to reload, giving you ample time to deal what’s essentially free damage.

The same goes for the grenade launcher types, only you’ll blow up their whole stash instead, dealing massive damage. Be careful, though, because more often than not, they’ll switch weapons if their main weapon's ammo supply is busted.

This is a good way to essentially pause the action when dealing with tougher enemies, especially those pesky grenade launcher fellas who make it harder to stay in cover.

More On The Division 2