It’s not often we get a game like The Ascent.

I don’t know what it is about the top-down shooter genre that endears it to indie developers. There are too many of them - usually with a pixel-arty look, but simultaneously not enough - the kind that used to push visuals and environmental detail to the point that you’d want to hack in a first-person camera just to get as close as possible to their worlds.

I would have been content with The Ascent being among the latter; it’s what I went in expecting. The Ascent is that, and so much more.

The Ascent is, at its basic form, a cyberpunk top-down shooter with RPG mechanics. It feels like the most obvious thing to mention that RPG elements exist in any moderately big game released today, like saying it has mechanics - but they do exist. Here, they take the form of fun abilities, some of which are destructively offensive and others are simple passive boosts. Your earned skill points go towards those passive skills, and they help boost your HP and energy, make you harder to stun, and improve your accuracy.

The Ascent leans harder into its combat and feel than it does numbers and role-play. Almost all of your abilities have a certain cyberpunk flair, even if they’re not always mechanically interesting. Animations are a big reason for this; they sell the power of your dash and leap moves, and contort your enemies’ bodies in ways that can only make you light up with glee. The destruction gunfire and abilities cause communicates a heft that’s often hard to convey in an isometric perspective. Every one of those interactions is made more powerful by the damage they cause; wooden boxes shatter, the ground deforms and cement blocks are reduced to their core in the few seconds it takes you to finish off your assailants.

When you’re not power-slamming foes, you’ll be hacking their kit or even doing something as simple as shooting a red barrel or blowing up a car – everything feels like it’s reacting to you. Witnessing rounds rend human bodies to shreds as their bones sunder never got old.

As satisfying as gunplay is in The Ascent, it’s the game’s unique weapon-raising mechanic that’s worth highlighting. This isn’t quite a traditional cover system, but by holding right-click or the left trigger, your character raises their weapon to shoot above any obstacle in front of them. You can play it as a cover shooter, ducking behind cover and shooting over it, but the system is unrestricted enough that you can essentially turn any high-enough object into temporary cover, as you send your own fire down range and quickly hide from theirs. Enemies are smart enough to do the same, and some archetypes will try to flank you to force you to move. 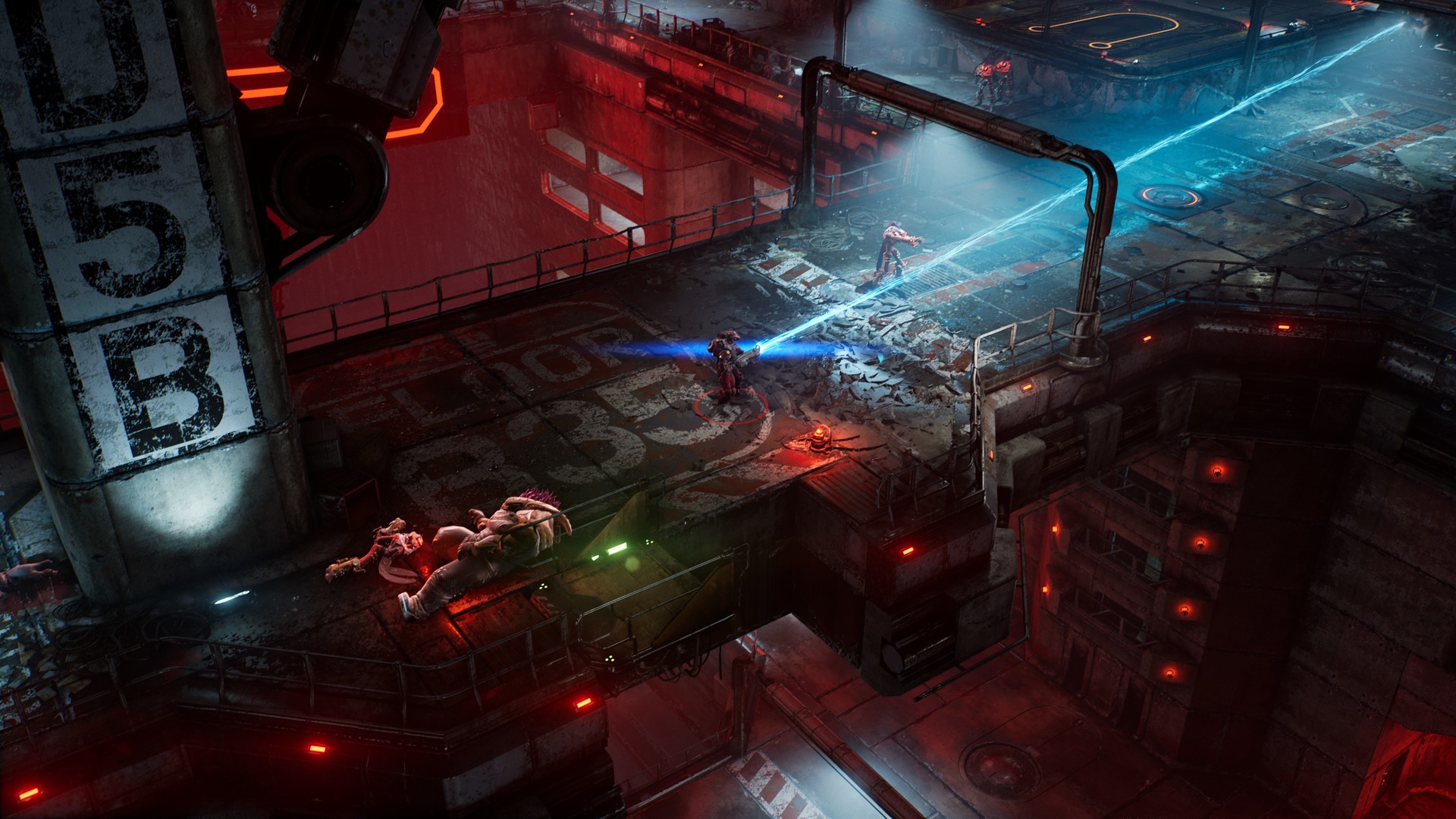 The Ascent’s difficulty helps these fights stay relevant. The game doesn’t offer any difficulty options, however, or really any way to make its various components more accessible. The challenge was well balanced in most encounters, but certain moments trump that in the AI’s favour with either incredibly tanky enemies, or a constant stream of melee fodder that stop you from landing consistent damage against a bigger ranged target. Those fights feel like they were made with co-op in mind, as you can easily imagine one player handling smaller enemies while the other(s) deal big damage to a boss.

If not adjusted, I could see those frustrating solo players, particularly as difficulty spikes could arrive in the form of random encounters as you explore the world (such as running into a bounty target). I’d also like to see the range of enemies tweaked. With the camera being as close as it is to your character, you sometimes get shot by off-screen enemies, and it can take you a while to work out where they are.

There’s an element of trial and error to The Ascent’s bigger encounters, and the game encourages switching up your kit in the field to adapt. It’s not as tactically interesting as it sounds; most of the time you’d just be switching to a more defensive setup to survive without really changing your approach. Another variable that makes retrying big fights rough is the lack of manual saves. The Ascent does checkpoint fairly often - every few seconds, or when triggering certain events – but some of those could fall just outside the area enough that you’d have to repeat a few smaller skirmishes, and move some distance before you can get back into the big fight.

There’s no easy way to know how long ago it saved, other than simply trying to quit, at which point it’ll tell you how old your last save is. It’s helpful, but needlessly hidden, and I haven’t found it to always be accurate. A simple manual save option, or more aggressive check-pointing would suffice. I have also found the game inconsistent at refilling all my gauges to 100% on every respawn. In many cases, I would have to wait around even longer just to get everything topped up before the fight.

And for some reason, there is no run button. It seems like it’s a side effect of having such a detailed world, as that usually causes regular stuttering in Unreal Engine games, but sometimes you want to run straight back somewhere, or realise you took a wrong path and want to double back to the hub, but the basic movement speed is just too slow. There is a fast travel system, one that links all the major zones with metro stations, but you’ll likely rely more on the taxi, which you can call almost anywhere outside of dungeons to send you to nearby areas. They’re both useful in different ways - but damn it Neon Giant, let me sprint when I want to!

The Ascent is the product of a core team of 12 people, but you wouldn’t guess that just looking at it. It often has the production values of a AAA game. This is most obvious in environment and world design. Veles, the planet where it takes place, is inspired by entire blocks of cyberpunk fiction. Some places are clearly modelled after the smog-covered L.A. of Blade Runner. Others are more surreal, in a way that reads like something out of a Paul Verhoeven film. It’s almost cliche at this point to praise the neon-drenched city of a cyberpunk game, but it’s hard not to admire it in The Ascent. You’ll find yourself stopping and just taking in the scenery every few minutes; this is a consistently stunning game.

It’s also a world dense with the grimy details and paraphernalia of a lived-in space, one where different cultures go about their day. There’s so much clutter in every frame in The Ascent, and I love it for it. The game uses this to create a believable world, and in conveying how affluent this or that neighbourhood is. You’ll know you’re in the lowly boroughs when garbage bags outnumber people and disrepair is the norm. It wasn’t until I reached the very top – ascended – that this picture of disparity really sunk in. Your strolls across these areas will usually be accompanied by some of the best ambient electronic music in the genre, including a certain piece paying homage to a classic. 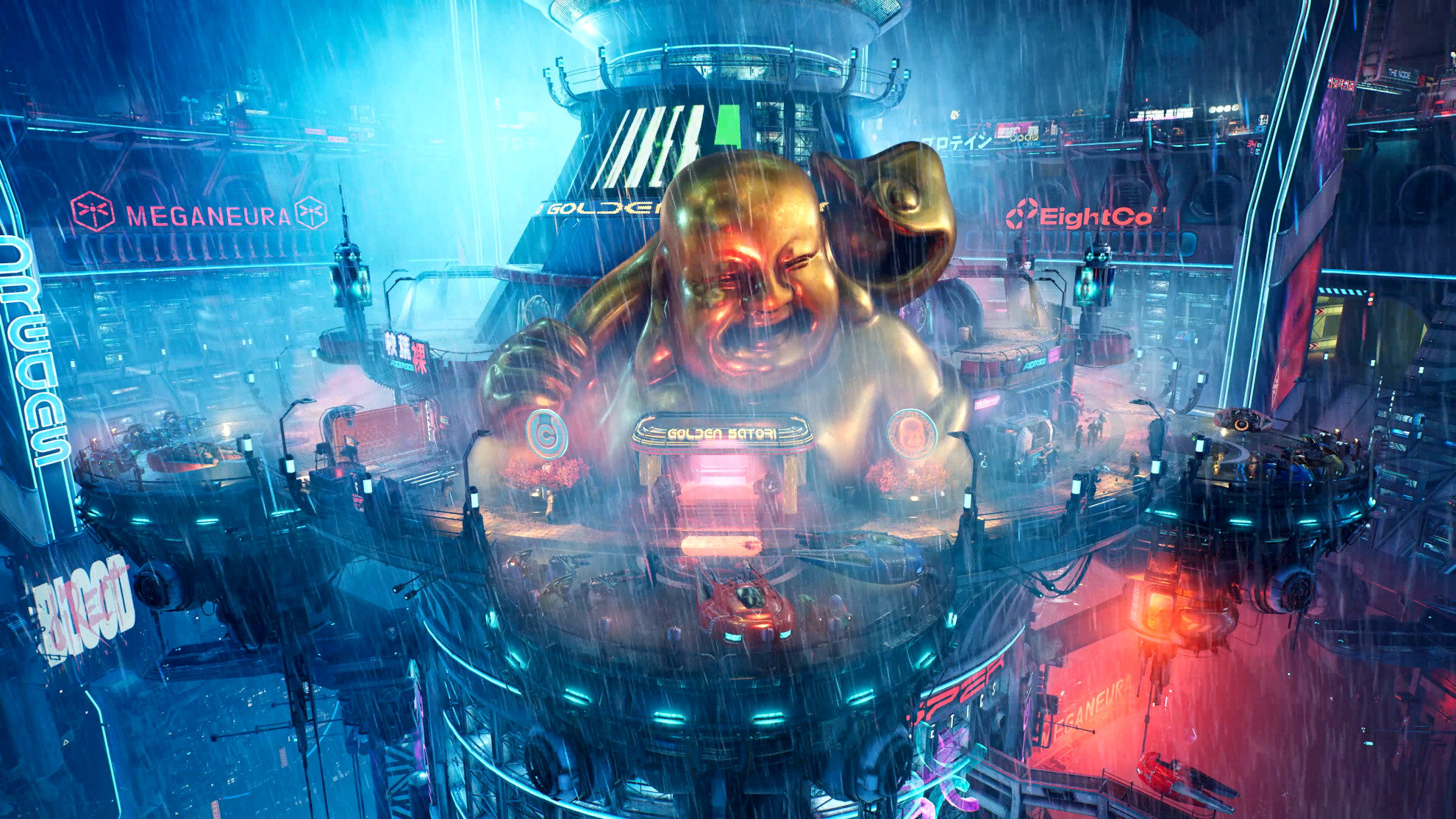 There isn’t much going on in the story to really make use of this fiction. The Ascent’s narrative operates on themes and tone rather than plot. Even then, it’s not clever enough to explore its well-trodden themes. You play as an Indent (short for indentured labourer). In this world, corporations haven’t just won, their existence effectively dictates the flow of life. Everyone works for a corporation, to pay off debt they owe to the same corporation for bringing them to Veles.

An Indent could go their entire life without fulfilling their contract, but this nightmarish scheme is the way of the world. The lucky Indents may eventually make enough money to pay it off, and the uniquely skilled might even get to go independent… so they can pick a different corporation to work for. I wish the game's story did anything with that, but it just goes through the motions. You work for one crime boss for a few missions, until you don’t. You then transfer over to a different one, who becomes your handler for a few more missions. There are some faint hints about a conspiracy theory that keep things interesting, but just long enough for it to be neatly resolved by the end of the game.

This is actually one thing that repeats a lot in The Ascent. Some systems will only really exist as an outline of something bigger or more involved. You can see this clearly in the conversation options being a simple stack of bullet points, rather than a dialogue wheel with a little more flavour. The Ascent is ostensibly an RPG, but it doesn’t do enough to justify itself as one. The flow of investing into Skills, which feed into Attributes so that those can ultimately affect your Augments wasn’t always clear to me as I played, and the game doesn’t do a good job of demonstrating why any of this matters, beyond the superficial. Outside of just boosting the Skills I liked, I never really bothered with the numbers side of it, nor did I ever feel like I needed to. 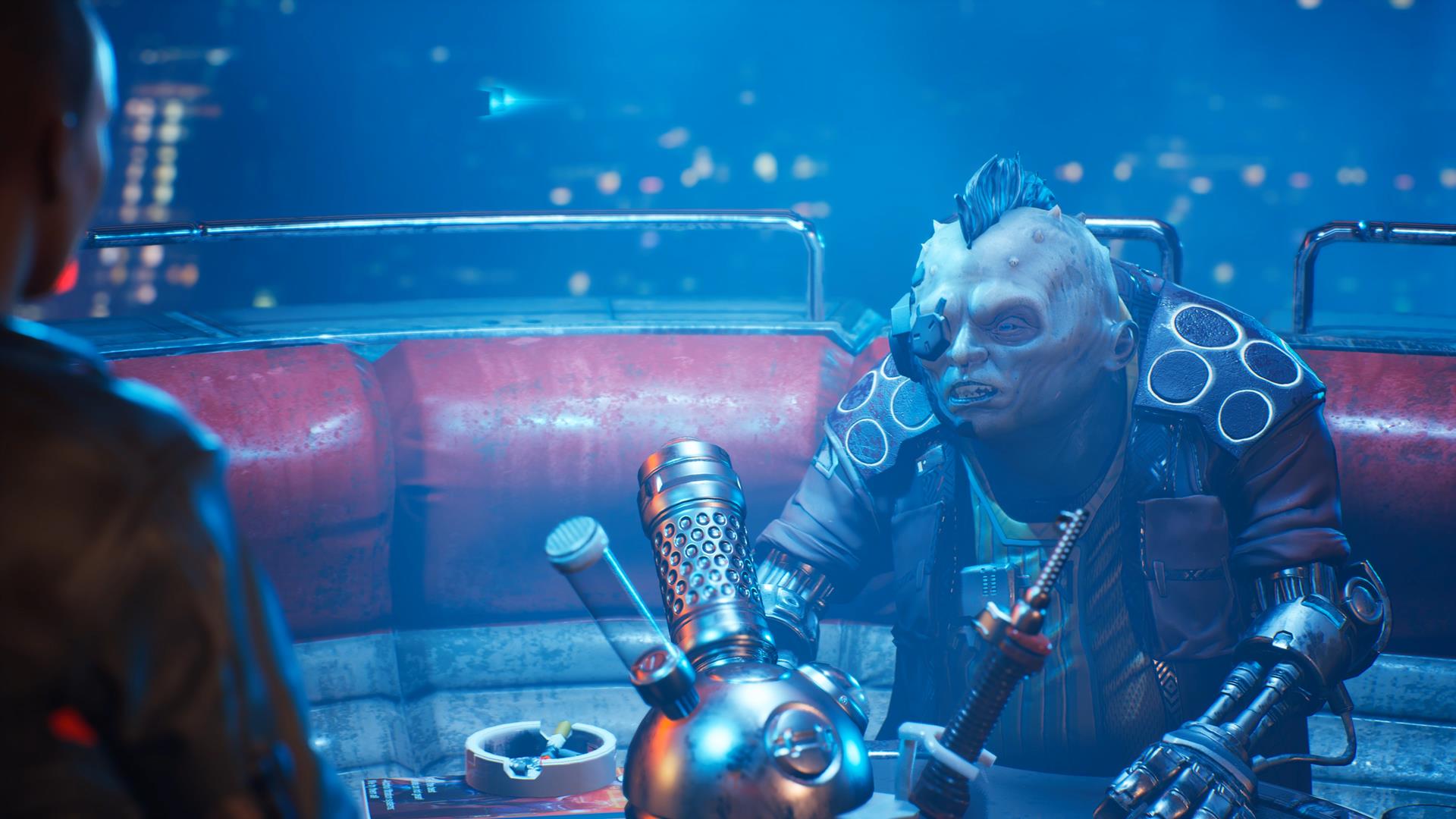 The loot system is another area with wasted potential. All weapons in the game are hand-crafted, which would be fine, except you also see those same weapons randomly drop from enemies throughout the game. And I do mean the same, they’re functionally and aesthetically identical. You can upgrade the ones you use the most, at which point every time you get that same weapon as loot it’ll drop at that level. This made it so no loot drop was ever exciting, and it further betrays the game’s RPG aspirations. It also kills variety, because as upgrade materials become rarer, you’re naturally going to stick to what you’ve been using since the beginning.

The Ascent is by no means an unpolished game, it’s actually one of the most well put-together I have played post pandemic. It just feels like certain elements either came together very late, or the team never had time to flesh them out.

The Ascent’s ambition is often the most surprising thing about it. I went in expecting a decent, simple cyberpunk top-down shooter. Instead, I got a compelling action game that feels great to play, and an introduction into a world I can’t wait to see expanded in future sequels. The Ascent is the type of indie superstar game you bring up to prove how much can be accomplished by a small team today.