Like Mr Porky and golden era hiphop, socks are crucial to a happy and fulfilling life. When you go without underpants it's called "going commando". There is no equivalent for going sockless, because that shit is unnatural. After millions of years of evolution, not wearing socks is as backwards as believing the earth is flat.

Imagine my delight, then, when Sock It to Me offered to send over pairs of socks to review. Socks, on a games site? That's right, because they are Tetris socks. Justifiable. I know what you're thinking. He's only writing this to get some free socks. Well, duh. But that's only one of my excellent, acceptable reasons. The others are; as already established, socks change lives. And I'm a connoisseur of casual footwear. And it's my site, so fuck you. Besides, after seven years of regular running my feet are ideal to test soft things. If footwear can survive my cloven hoofs, they can survive the apocalypse.

Visually, we're going straight in with the classic Tetris design, which makes them kind of cool in a retro '80s print way. I realise the danger that these could be seen as novelty - you don't want to be like Alan in accounts who wears novelty ties during holidays and still lives with his mum. But the truth is Tetris is still cool, and the simple block patterns instantly recognisable. Tetris VR and Tetris 99 have reinvigorated Russia's greatest export since Stolichnaya, and these socks are just as potent - as soon as I put them on my wife was all over me, like Zuul seeking the Keymaster. 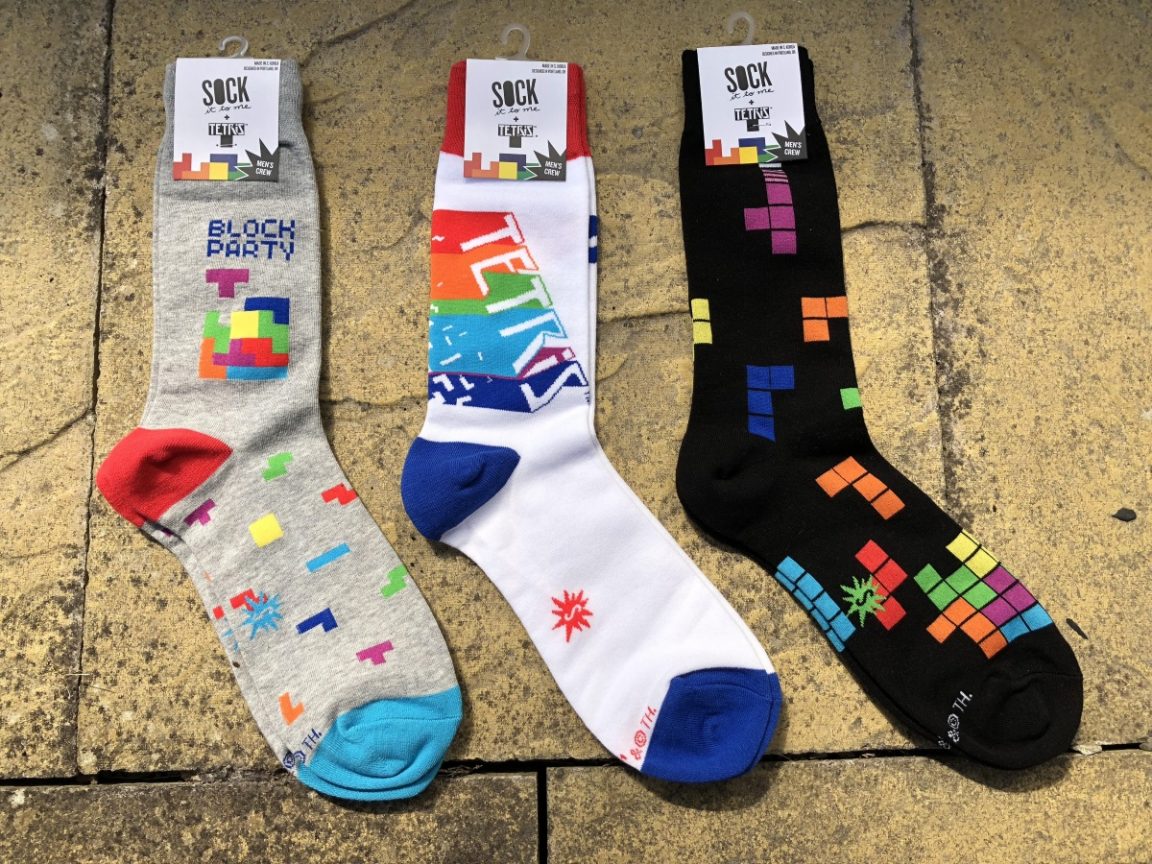 I'll compare them to some other video game socks, because that seems the right thing to do. In 2015 I went to the Call of Duty Championships, which in those early days was held in a tent on top of a carpark in downtown Los Angeles. And the best thing about that was the official socks. Absolute crackers, and with extra elasticated comfort over the arch of the foot. These were not just cheap promo items, these were real game changers by which I now judge all the endless free tat we get sent at VG247.

Last year I went to that obscene Fortnite shindig at E3 where Epic hired out half of LA for a party. I got a pair of Fortnite socks from that, and they're not bad either. They're not up there with the Call of Duty joints, there's no extra stitching on the heels or toes, nor the arch support, but they are well made and still have plenty of comfort left in them, even a year later.

Anyway, these Tetris socks fall somewhere in the middle for me. They're very well made, comfortable and with extra heel and toe support. I would have preferred some more thickness or support on the footbead rather than the same consistency all over the sock, but the elasticated upper is appreciated and stops them flapping down around your ankles, like your grandad's nad sack. They're just short of mid-length - so they're almost crew socks - going just to the halfway point on my beautiful calves. Remember: too short and you look like a school child, too long and you're wearing elf cosplay.

These aren't your HUF weed socks either, so they don't carry an eyebrow-raising price point. I used to be a bit weirded out by spending good money on something that seemed so insignificant as socks, but the truth is a good pair of socks improves your life. Quality socks instill confidence, give a sense of pride to your stride - something you won't get wearing those knock-off £1.99 for three pairs shite from the car boot. Don't be a tramp. Tetris socks are good. I'd pay for them. Sort your plates out.