If you're looking for a real Hardmode challenge in Terraria, you might want to consider looking for Queen Slime.

This Hardmode boss can be summoned using a special crystal and you'll need to prepare for a tough battle. She's harder to beat than King Slime - the female of the species is more deadly than the male, after all.

Before you can fight her, you'll need to find a Gelatin Crystal then head to the Hallow Biome, as it's the only place she can spawn, so let's get started.

Terraria: Where to find a Gelatin Crystal

To find a Gelatin Crystal, head to the Underground Hallow. They are bright pink and there's a good chance one will spawn near the Crystal Shards, so once you've found one, go ahead and mine it. Head back to the Hallow and consume the Gelatin Crystal to spawn Queen Slime. 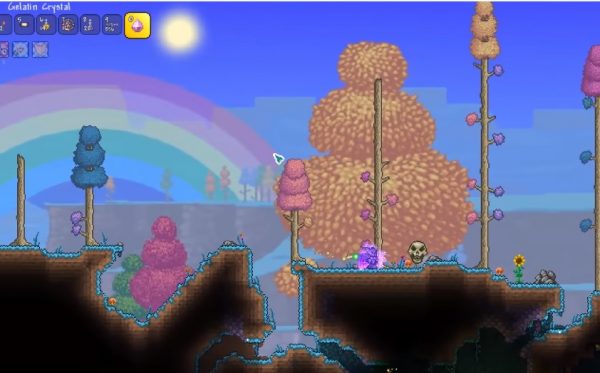 Terraria: How to defeat Queen Slime

Despite being a Hardmode boss, she isn't too difficult to beat. She moves similarly to King Slime but much faster, and she'll often stay in place for a few seconds before either rushing you or firing Crystal Slimes all around, which can take you down pretty fast if you're not careful. Like King Slime, the Queen can also teleport to be closer to you, so watch out for that move.

When you manage to reduce her health by 50%, she'll spawn some wings and you'll begin the second phase of the fight. She'll now fire the Slimes at you directly, so watch out. She'll also try and land on you, so make sure to keep moving.

Once defeated, she'll drop a Treasure Bag which holds a fair amount of loot. You'll get a Sparkle Slime Balloon, a Queen Slime Relic and some Volatile Gelatin, and at least one piece of Crystal Assassin gear. There's also a chance you'll get some other cool look which we've listed below:

For a video guide on how to beat her, check out this video from BironGaming.

Now that you've defeat Queen Slime, you can check out our guides on how to gather Ecto Mist to craft walls, where to find all of the Whips, how to get a Cat License and how to increase NPC happiness.

You can also read our guides on how to get the best sword in Terraria, how to grow more gems , how to spawnn the Empress of Light and what the different coloured fairies mean and do.