Tearaway reviews have begun. VG247's Dave Cook has finished it and gives his opinion on Media Molecule's papercraft romp. 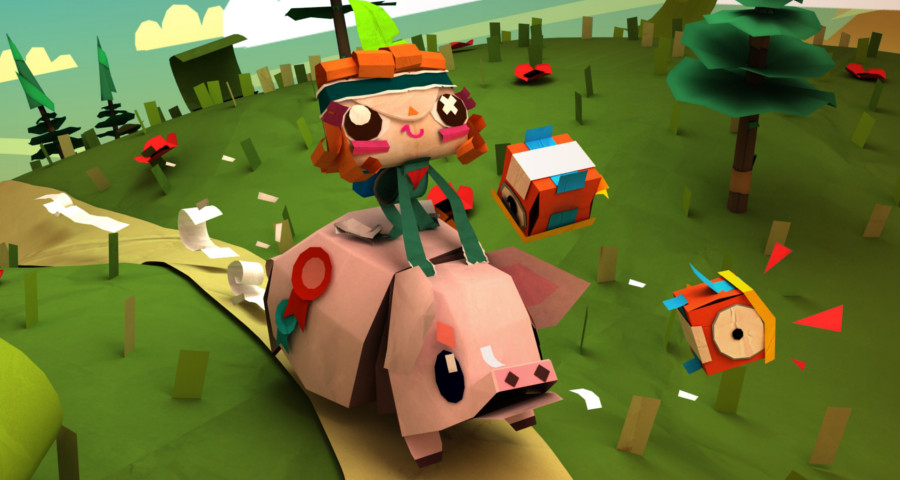 Developed by Media Molecule, Tearaway is coming to PS Vita on November 22

You can check out the most recent Tearaway TV spot here.

I recently published a preview of Tearaway using only the in-game camera. Check it out here.

This Tearaway trailer shows off the game's papercraft models and puzzle mechanics.

Innovation doesn't come easy in today's industry. All too often we see mechanics branded as 'evolutionary' when in reality they're simply derivative. Think: when was the last time you played a game and genuinely said, 'I haven't seen that before'? This is an medium capable of dazzling the user with grand spectacle only imaginable in their wildest dreams, yet it often suffers from a dearth of genuinely new and game-changing ideas.

Tearaway is one of those rare games that begs such reflection in the user. While short-lived it presents a wealth of new mechanics and concepts that use the PlayStation Vita's bespoke features to work in ways that really sell the format. It's a show-piece for Sony's console and to that end it really does underline what can be done with the combination of touch, motion, sound and cameras. Who knew that all of this would come from a simple tale of a papercraft courier and his greatest delivery?

Media Molecule's paper world is up there with the likes of Rapture in the annals of identifiable game settings. What it lacks in narrative depth, it more than makes up for in vibrancy and playfulness. You will jog across cardboard fields as grass made from construction paper billows lazily in the wind. Glue that binds the edges of paper platforms will come unstuck and split as you jump across them. Precarious bridges will crumple and sag under your weight. It all feels tangible and responsive to your presence.

The plot sees the keepers of Valleyfold inviting you, the player, into their world to shake it up a bit, and to create new tales that will keep the realm interesting. Ferrying your invite is Iota, a brave courier who must journey across deep forests and scorching deserts to the sun, which acts a portal between the paper land and our own. Using the PS Vita's forward-facing camera, your face is always present in the sun's glow, making for a superb 'carrot and stick' progression mechanic, similar to the mountain-top high above Journey's blazing horizon. You'll really feel compelled to press on at the sight of your mug dangling there in the distance.

This is a platformer at its core, and that base jumping mechanic works a treat. It's only when those very simple ideas become laced with heightened interaction from the player that magic starts to happen. Tapping the console's rear touch pad while standing on a drum skin will fling Iota into the air, while the game's final third comes with a host of increasingly fiendish tilt-based platform sections. You'll eventually earn a Squeezebox device that will either blow or suck air, causing paper windmills to ferry Iota over gaps. He can scrunch himself into a ball and roll around winding runways. Tracks of glue can be used to stick to any surface or ceiling, making for some neat 360-degree traversal. 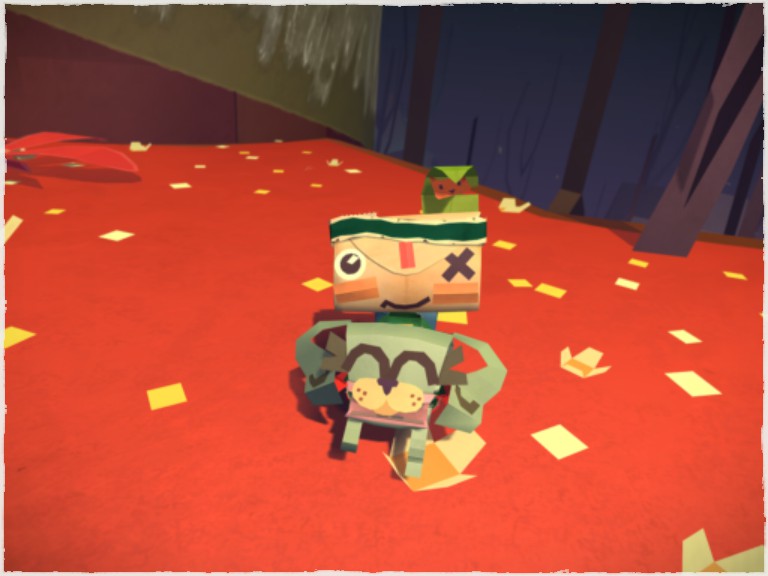 Here's a photo I took myself using the in-game camera, but who's that little scamp?

All of these ideas and many more fit comfortably alongside Tearaway's sub-quests, which see Iota aiding the weird and wonderful denizens of Valleyfold's scrapbook world. Some tasks boil down to simply defeating rooms full of Scraps, which are Tearaway's mischievous enemies, while other chores make further use of Sony's handheld. At one point you'll use the game's art suite to fashion a new star design for the world's night sky, and from then on you'll see your design floating in orbit. You're also asked to use the camera to spruce up an Elk's pelt. Simply take a photo of some pattern in your house and it'll wrap around the creature's fur.

”What Media Molecule does best is create worlds that ooze charm and populate them with new ideas focused on creativity. They have cracking soundtracks, environments washed in colour and themes that make it impossible to smile. That hasn’t changed in Tearaway. It’s simply a lovely, lovely game.”

Progression aside, you'll also be rewarded with Confetti for completing tasks. This can be spent on buying new design assets for Iota. You can customise almost every element of his surface design, with new eyes, mouths, motifs and more. Media Molecule's creation tool-set ensures that each journey from the starting line to the sun is personalised and in the end you'll see your influence represented in the world clearly. The plot also culminates in what I regard to be one of the smartest endings I've witnessed in a long time and it absolutely makes the ride worth it.

Tearaway is an easy game to love, and there's every chance its disarming qualities will coerce even the stoutest commentators into a state of unwavering positivity. It isn't without criticism however. It's quite short unless you actually make the effort to complete sub-quests, or if you decide that taking photos with the in-game camera simply isn't for you. The game hasn't been designed as something you should rush, as the pacing and aesthetics suggest a more relaxed approach, but you can easily hammer through the base plot in a couple of evenings.

I get the feeling that Media Molecule is targeting kids and families with Tearaway, given its passing life-span and forgiving difficulty. Death boils down to simply going back to the previous checkpoint, while falling into a pit will see you transported to the nearest ledge. There is no 'game over' condition, which makes this ideal for younger players but quite unchallenging for the 'core' pack. My personal view is that the pace is joyous enough, delivering a nice volume of challenge and accessibility that lets you drink in the world at leisure. It's a calming experience, that's for sure.

Where the studio's previous effort LittleBigPlanet 2 culminated in an unlimited end-game full of creation, imagination and creativity, there's no real replay value in Tearaway, aside from going back and completing overlooked tasks and collecting Confetti presents. You can also unlock a variety of papercraft models, so that you can build characters and objects from the game in the real world. It's a superb way of getting people creative after they've put their console down, so in many ways, this could be considered Tearaway's equivalent to LittleBigPlanet's level creation. It's a new idea that I haven't seen before, and it's fiendishly clever.

But in terms of proper in-game content after the credits have rolled, you may not see reason enough to play on for a second or third round. What Media Molecule does best is create worlds that ooze charm and populate them with new ideas focused on creativity. They have cracking soundtracks, environments washed in colour and themes that make it impossible to smile. That hasn't changed in Tearaway. It's simply a lovely, lovely game. The big question is whether or not all of this good intent will convert the hardened gamers into the fold, or if they'll balk at the short, easy campaign.

I enjoyed it, and throughout the journey I kept on theorising what was inside Iota's message to me. What was it? What could possibly demand such an arduous journey?

Well, that'd be telling, wouldn't it?

Disclosure: To assist in writing this article, Sony sent Dave a download code for Tearaway on PS Vita, and no, Half-Life 3 wasn't inside Iota's message.