Chasing the reality of a new Syndicate game is a confusing mess, but it's mess with intentionality: it points, with unwavering resolve, at the existence of the publisher's worst kept secret. 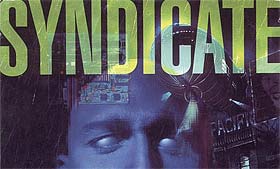 Heavily rumoured to have been in reboot development at Starbreeze for nearly four years.

The rise and fall of rumour and belief is like catnip to Internet sleuths, but the deep fondness and genuine, nostalgia-free appreciation for the cyberpunk tactical RPG series, which ran to two games and an expansion in the early- to mid-nineties, is a cornerstone of the whisper which refuses to die.

Excitement first began to build in early 2008 when EA announced a collaboration with Starbreeze Studios, best known for tie-in titles, including both The Chronicles of Riddick games and The Darkness.

EA gave the mysterious game a working title of "Project RedLime," but would say nothing more than that it would rework a "classic" property for PC, PlayStation 3 and Xbox 360.

Rumourmongers were not so discreet, with multiple sources assuring multiple press outlets that Syndicate was the go.

At the time, the new Syndicate was said to have been in development since August 2007, but would not see release - nor official announcement - until after Starbreeze's other EA project - a game based on the Bourne series.

"We're already deep in development on Project RedLime and the team at EA is giving us the time we need to perfect our vision," Starbreeze CEO Johan Kristiansson told Games Industry.

From that time on, the Syndicate rumour turned up again every few months, to the point where belief in the new game became canon among games press, and the posting of yet another leak more an act of anticipation than the strengthening of faith.

Things got more tense in late 2009, when CVG turned up what is purported to be a single page of the game's script, along with a alleged set of concept artworks.

But then, in March 2010, Starbreeze dropped a bomb: one of its EA projects had been canned.

While the internet collectively shat itself in terror, reports filtered in that the Bourne game was the one to have felt the publisher's axe. Doubt continues, but just this month, a former Starbreeze contractor seemed to confirm the Bourne shelving.

The original. Best sound effects ever.

In the meantime, EA had fanned the flames of doubt by filing trademarks related to a number of classic franchises, including Bullfrog's back catalogue, but failed to follow suit with Syndicate.

A few weeks later, Starbreeze did it itself. Rejoicing recommenced.

So where is it?

By mid-2010, Starbreeze's Syndicate had reportedly been in development for almost three years, and when the Australian Classification Board listed a rating for EA's mysterious and similar sounding "Project Red," we started holding our breath. Again. Was this "it"?

The current belief among games press and PR is that EA will announce Starbreeze's Syndicate at E3 this year. Reports suggest the game was shown at GDC earlier this month, and EA Games boss Frank Gibeau made a cheeky reference to not "forgetting" old IP when quizzed on the topic.

Apart from that, all we know for certain is a series of "not"s - the game does not use Unreal tech; Peter Molyneux, the game's original creator, is not involved (although he would have liked to be); and it's not going smoothly, if close to four years in development without an official announcement is anything to go on.

Is Syndicate real? It very much looks like it. Will it see release this side of a Duke Nukem Forever period of vapourware? That's a different question entirely.