Surgeon Simulator 2013 developer Bossa Studios tells VG247's Dave Cook why it never banked on the mad surgery romp being a viral success. Also, what was 'that' Half-Life 3 rumour about?

Surgeon Simulator 2013 is bat-shit crazy, based on no real medical research and was never designed to be released at all. It's a happy accident.

As you can see from my gory hands-on with the game, it's utterly daft and hardly looks like the kind of game that'd get regular folk babbling by the water-cooler.

The reality is that the game quickly went viral thanks to user-created YouTube 'let's plays', speculation over its many hidden easter eggs and general word of mouth. Suddenly, everyone wanted to get their hands soaked in gallons of Type-A and chunks of gut-matter.

Earlier this year I saw Bossa's co-founder and gamer in chief Henrique Olifiers give a presentation at GameHorizon in Newcastle and he was there to talk about a new wave of social games that become notorious due to their viral nature - or as he called it - 'virality'.

I cornered him afterwards and suggested that banking on games going viral isn't exactly a solid business plan, seeing as virals themselves are unpredictable and tricky to force. We discussed the issue at length and now here we are, months later and Surgeon Simulator has some Team Fortress 2 DLC and incoming Oculus support under its belt.

It's doing well and people are clearly still interested, so I caught up with him recently for a follow-up chat on the matter and to try and understand why this insane experiment has become so appealing. There's also the little matter of that Half-Life 3 rumour, but I'll get to that shortly.

"At the Global Game Jam back in January, our team of four was given the theme 'Heartbeat'," Olifiers recalled of the concept's creation. "Instead of going all subjective about it, they went literal in a humorous way. 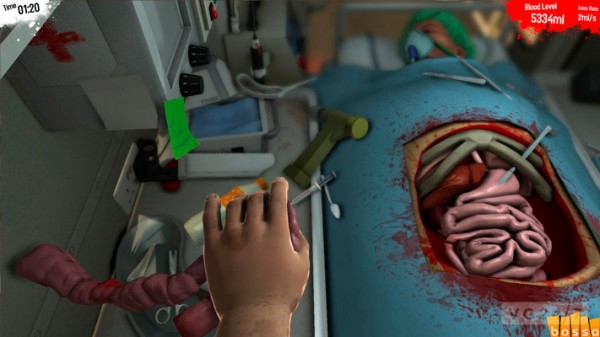 Shit just got real yo.

"Then they drew inspiration from a couple of places, like the' Meet the Medic' Team Fortress 2 video - which later would go full circle and become part of Surgeon Simulator as a free DLC- and Jurassic Park Trespasser where you could move your hand holding the gun just because.

"Lastly, the concept of creating an input method where hardcore players and first-timers alike were on the same foot: the AWER was born."

The 'AWER' mechanic sees players clenching each of surgeon Nigel's fingers by pressing the corresponding keys on their keyboard, and yes I checked, you can totally give yourself the middle finger if you really want to.

Olifiers told me that once onlookers at the game jam saw the mechanic in action they started dicking about trying to break the rules. So instead of breaking open a patient's rib-cage to access his heart, they battered it in with a desk clock instead. Highly illegal in the real world sure, but it got people laughing and talking.

By the next again day Bossa's staff were crowded around the prototype in stitches, trashing the joint with Nigel's clumsy digits. The team decided to upload the demo as a browser game and within hours the site was crushed by DoS attacks because of the sheer volume of people playing. The YouTube videos quickly followed and gained viewers in the millions, and Forbes even compared the game to the Rick Roll meme for its viral spread.

Olifiers continued, "The management team met right away and decided to pull the developers from their current projects and take Surgeon Simulator forward as a full project with 48 days of production, to keep in line with the original 48 hours. Meanwhile, our social team went on overdrive and ensured that anyone talking about the game was replied to, that people making videos had our support.

"With so much buzz about Surgeon, we took it to Steam Greenlight to see what would happen, and I kid you not, the graph of 'yes' votes was just mind-boggling. A few weeks later we had been greenlit by Valve and the game went live as we hoped it would, thanks to a dream team behind it who believed every step of the way."

While the medical theme was totally improvised and the methods were questionable, Surgeon Simulator 2013 did indeed become a success due to word of mouth spreading faster than a bush fire in dry season. Bossa had stoked the flames, but I was keen for Olifiers' opinion on whether or not the trick could be repeated on purpose.

"There are a few aspects you need to have in place to begin with,"Olifier replied, "like an open channel with the players and support of the people who like your game. We work side-by-side with our fans, we help them get their videos out there, we talk to them every day, all the time - and not through some official and soulless channel, but the real devs, the people behind the game. 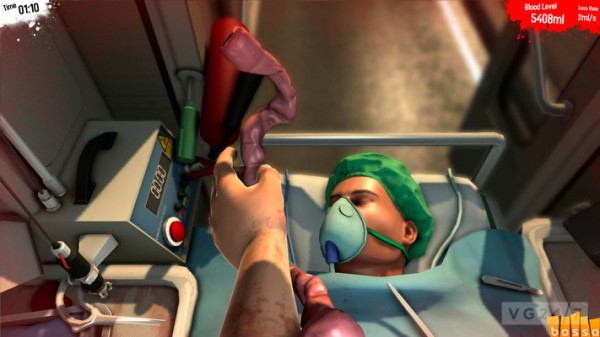 "From a game design perspective, things like secrets, discoveries and rewards help. What we call 'emergent gameplay', which means that your experience with a game is unique to you and only you, is part of the equation. It makes every video out there appealing by showing something singular.

"As counterintuitive as it sounds, not having any tool in the game to help with its video capture and publishing also played in its favour. It meant that every video was a result of manual labour of a player, which gave it their own spin and content. If the game did it all by itself, the result would be a million videos showing more or less the same thing. And that's just noise, it's irrelevant."

Emergent play is exactly why PS4 and Xbox One have footage capture options, and it seems that the ability to record those insane, unscripted moments of sheer madness or skill will be a prominent feature going into next-gen. Giving the player tools to create those mad moments is also necessary.

Despite this, Olifiers cautioned that even with all of these emergent triggers and social support in play, it is still impossible to bank on the virality of a game. The bottom line is you never truly know what's going to take off, but one of Surgeon Simulator 2013's secrets in particular highlighted a masterclass in sparking a debate. 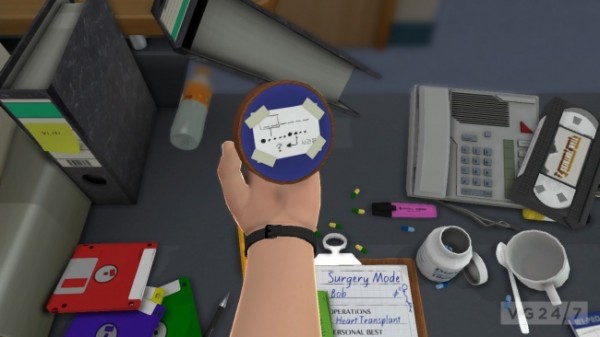 Like, if you kind of squint the symbols re-arrange to make Freeman's beard. Totes.

I'm talking, of course, about this supposed Half-Life 3 ARG embedded in the game's Team Fortress 2 update. It's basically a desk ornament which - when turned around - reveals a strange diagram and lots of Korean text. Naturally, as the DLC was Valve-themed the internet assumed it was something to do with Half-Life.

I asked Olifiers to come clean about the easter egg. Was it a prank or just a misunderstanding? "As part of the ongoing puzzle, we wanted to hide a clue in a foreign language that one cannot directly translate via Google. Eastern characters are perfect for that. It happened that the Half-Life 2 Korean bug happened right at the moment we were discussing the ARG, so Korean, there you go. Why not?

"Well, not, because a lot of people read the most amazing things into it, and it fed the Half-Life 3 conspiracy theory overnight. We had to scramble to clarify it the very next day, but the web is fast: by then, a lot of people had picked up on it.

"Afterwards it was fun to read how it all evolved and how passionate folks were about it, but it left us a bit sad to think that it might have bothered some of the most die-hard fans of Half Life, even if unintentionally. Anyway, lesson learned: no more Korean."

While the Korean messages won't appear in Surgeon Simulator 2013 any more, it'll be interesting to see how Bossa uses the game to poke and prod the internet and viral channels moving forward. Olifiers confirmed that the game's content stream hasn't ended, so there's simply no telling what stunt they'll pull next.

Either way, the game has clearly struck some sort of bloody gold in the way it hooks people in and gets them talking. What's your view on why this has happened? Let us know below.