Rebellion's co-op third-person shooter Strange Brigade is packed full of puzzles and secrets to collect. If you're trying to find a few, or just need a little help with the game's first mission, then here's what we've found so far.

As well as a walkthrough of the mission, we've focussed on grabbing the collectables that do something gameplay-wise. Collecting Relics will eventually unlocked powerful abilities, whereas Crystal Cats will give you bonus gold at the end of a level. Just a note on the Crystal Cats, it looks like sometimes they only appear if you walk past them. So if one isn't showing up for you, walk a little way off, then head back.

From the cliff edge head over the bridge to your left. Walk forwards and blast the wooden barrier with your gun.

Continue forward, then when the bridge is broken, head over to the right and down the ridge. As you head down, shoot the Crystal Cat on your left. 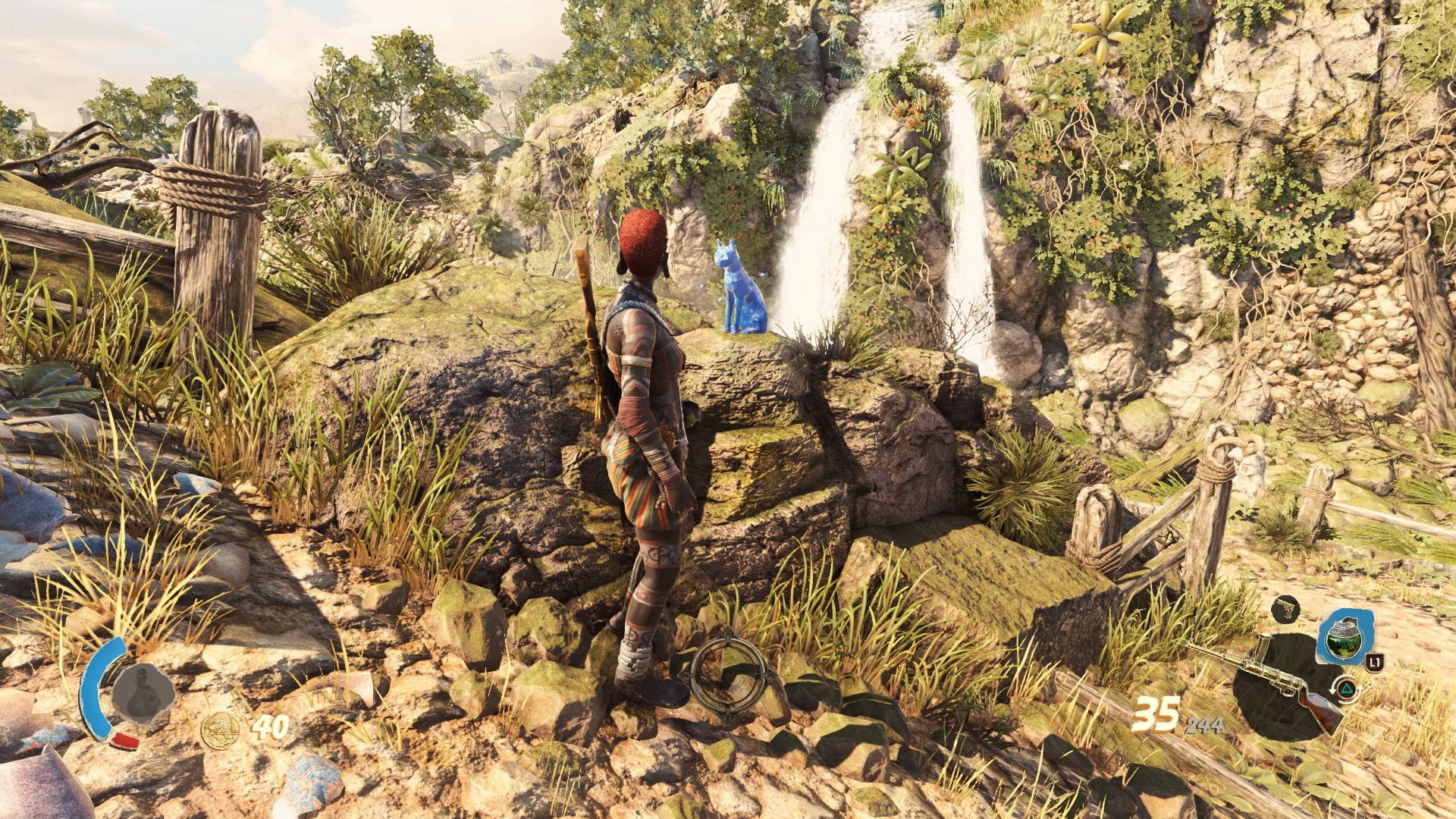 Continue to the bridge, then blow the pot on the floor to your left and grab the chest. Then go across the bridge and break open the door.

Go in, kill the mummies and head on up out of the cave.

As you emerge outside, you’ll see another cat to the right of the second archway you reach. 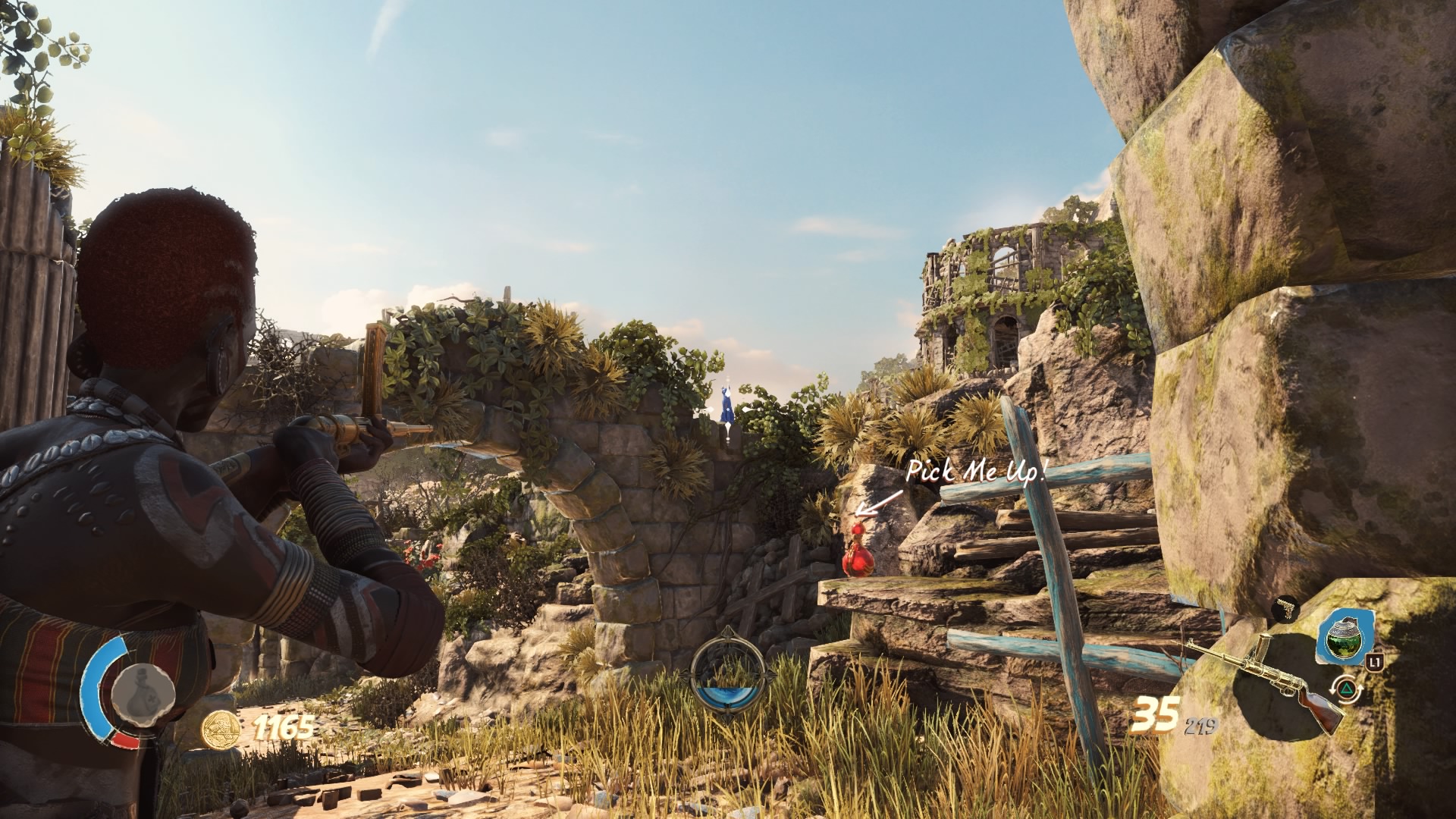 Grab the health potion off of the side, then head up the path back on yourself. A mummy will burst out and attack on your left, kill it and grab some gold.

Continue forwards through the arch and grab the chest on your left. Don’t worry about the gate you see next to it just now, we’ll come back for it later.

Once you’re in the camp clearing, bear right and hold R2 to activate the gate lock.

When that’s done, head left, over towards the middle of the clearing. On your right, you’ll see three blue glowing orbs - shoot them and it’ll open the door in front of you. 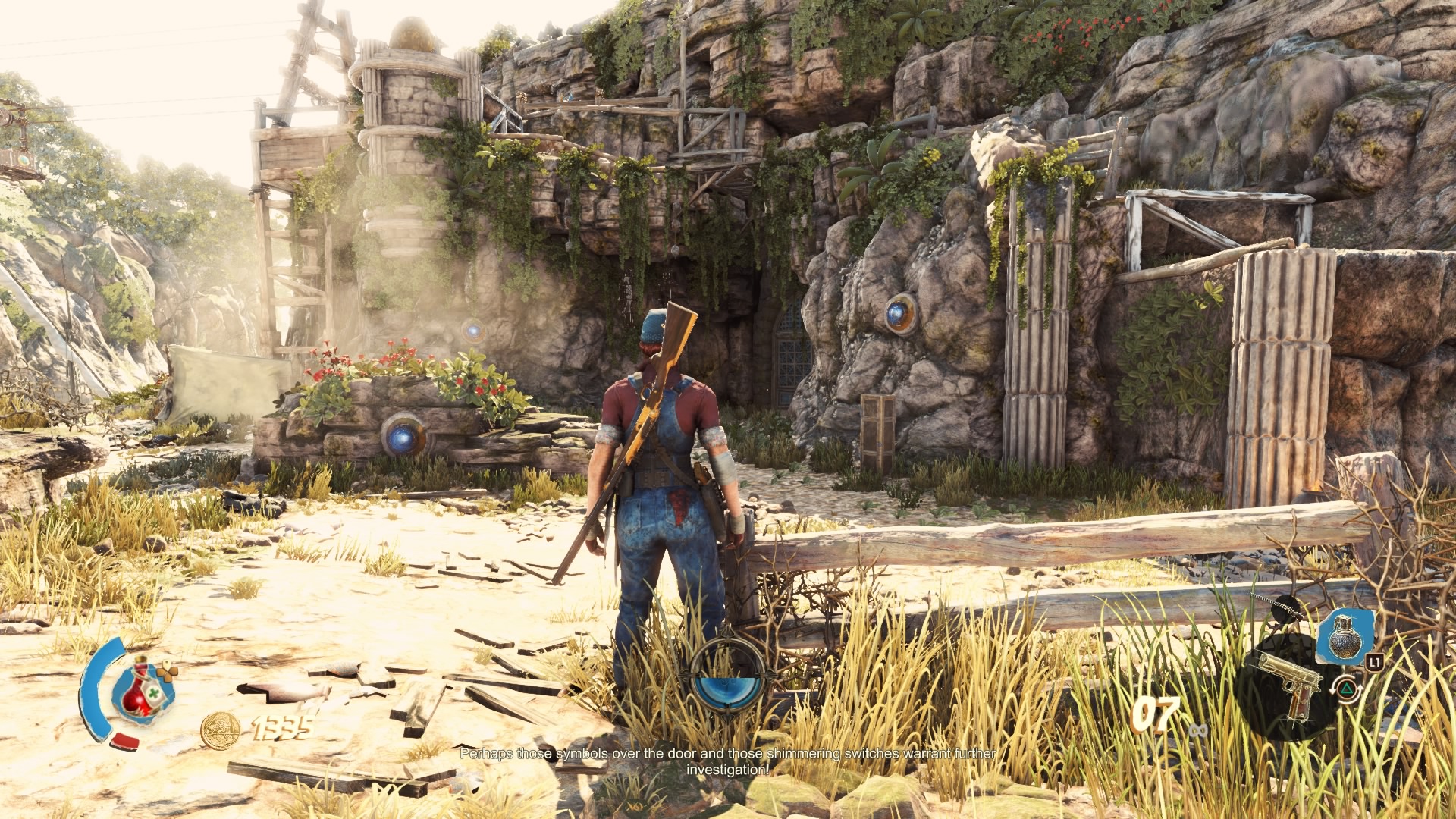 Turn around and look behind you, here you’ll see a puzzle door with runes above it. What you need to do is hold R2 to activate the puzzle, then shoot the runes on the door in the same order as they appear above it.

So in the example below, you need to shoot the person with the bird once, the symbol that looks like an eye once, then the fish three times, then the eye symbol again. 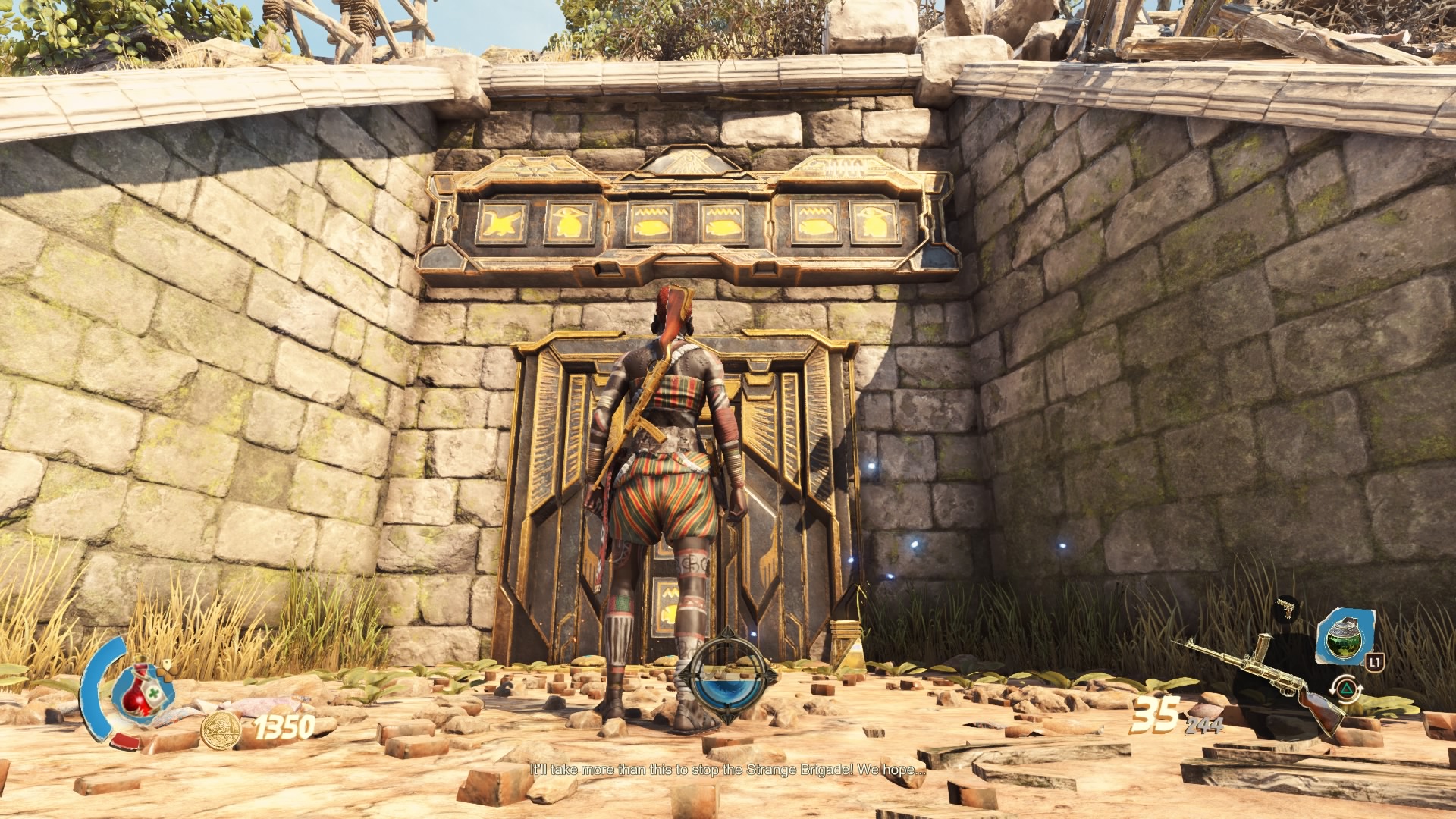 This leads to the gated off room you saw before where you can grab a Relic.

Head back into the central area, left, then up the hill. Kill the mummies in your way, and at the top you can pay 500 gold for a useful power weapon.

Back at the bottom of the hill turn left down towards the river. Here you’ll find more gold and a chest at the far end.

Now head back to the door you opened by shooting the blue orbs and go through.

Go through the arch and head up the hill. You’ll see another Crystal Cat on your right about half way up. 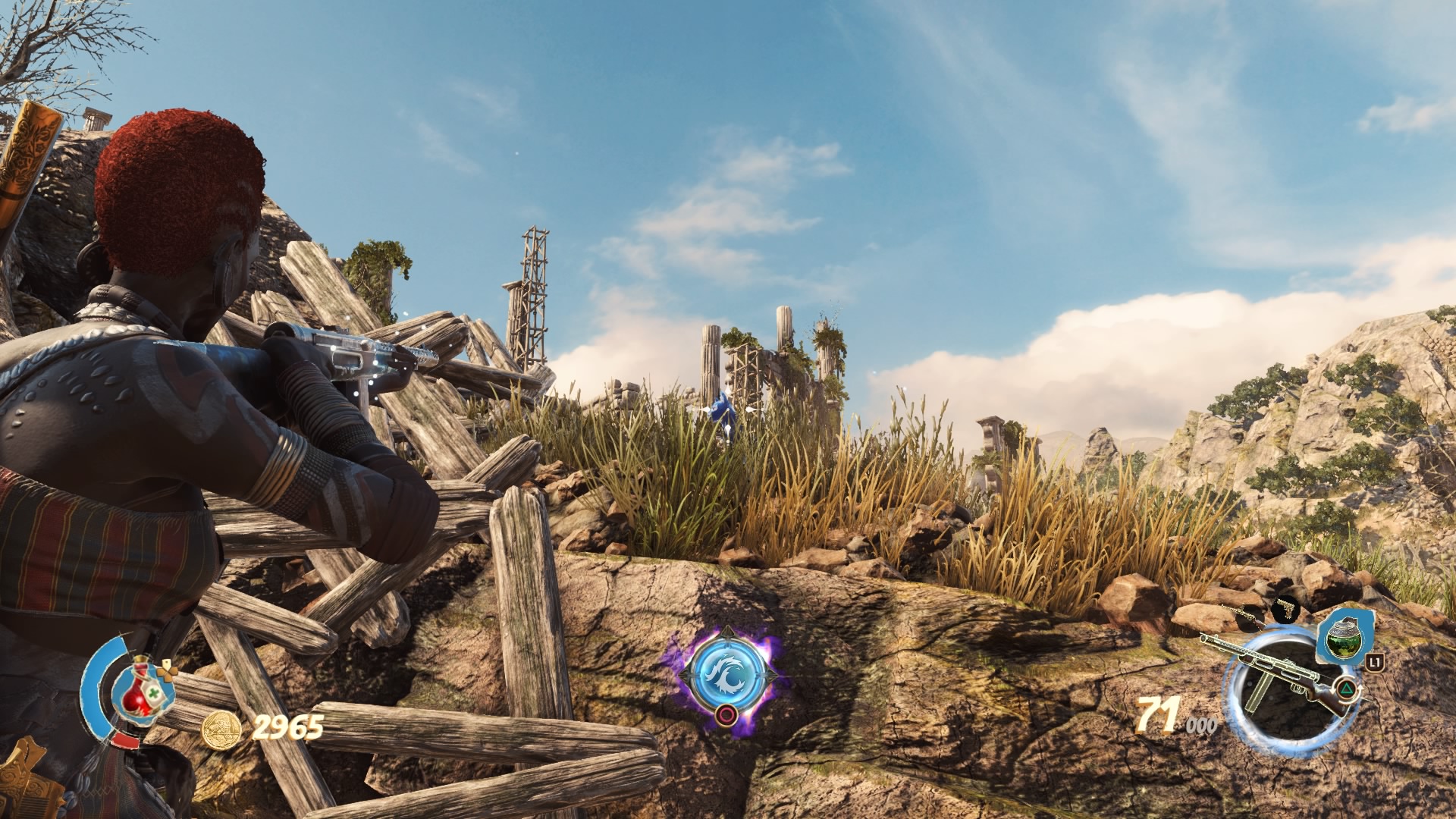 Kill the mummies in your path and go through the archway. You can restock with ammo on the right. To get at the chest on the pulley over the river, shoot the glowing red target far in the distance on the other mountain. 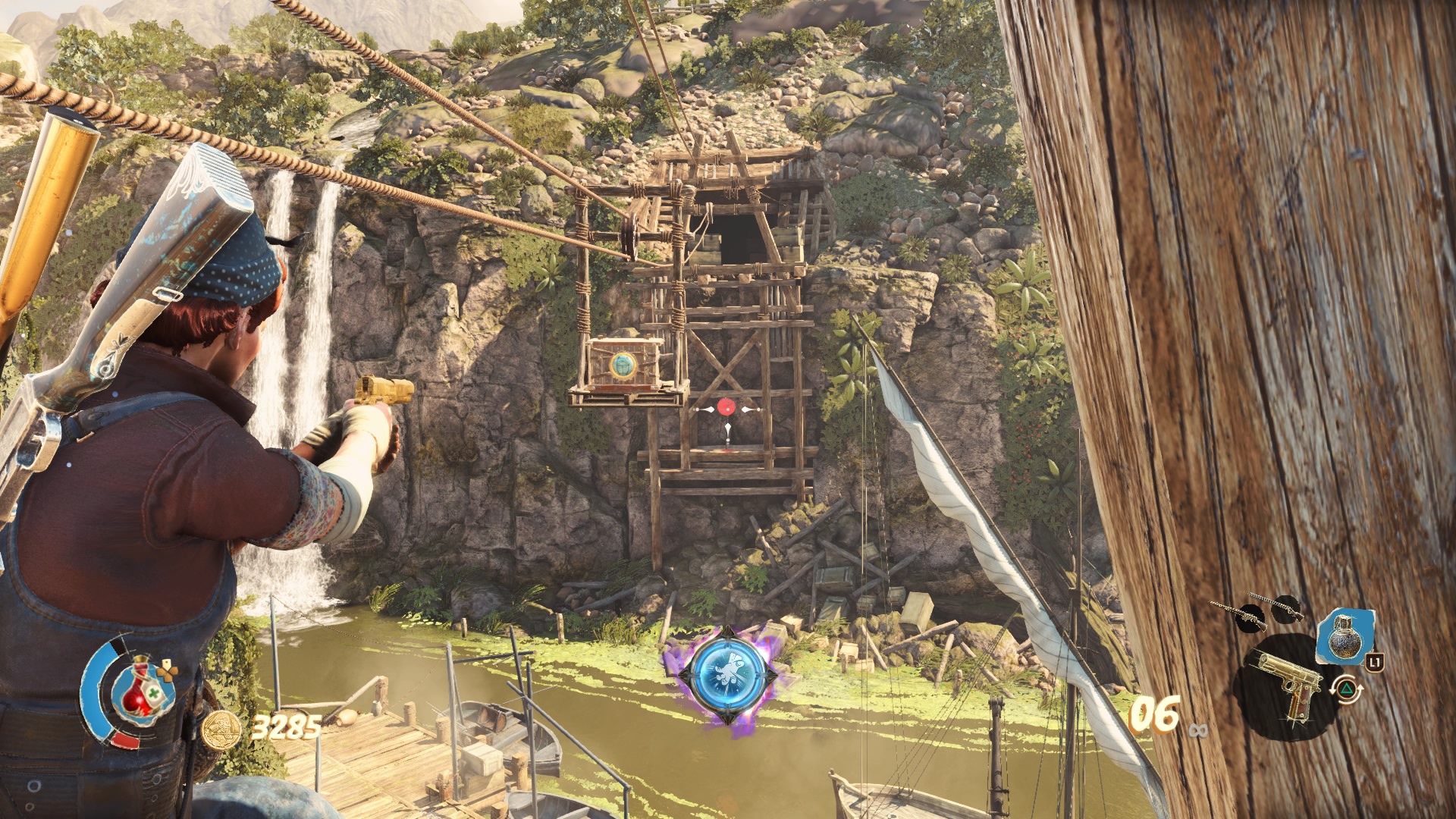 Once you’re done, grab the Scarab key from the rotating structure to your left and head back down towards the locked gate.

Unlock the gate with your Scarab key and press on.

When you’re through, run forward and there’ll be a cutscene where some javelin throwing enemies spawn. As soon as this finishes, run a little way back towards the gate you just came from and you should see a glowing enemy carrier a backpack appear. Shoot him, then run up and collect the relic.

Once the first wave of enemies is clear, bear right up the hill through the double archway and turn right at the top.

Turn right again down through the stone hallway and you’ll come to an area where you can buy another power weapon. Turn around right and you’ll find another path up the hill. Go up and follow the path around. Enter the cave in front of you.

Once you’ve cleared out the enemies, bear left to find another Relic door. The code for this on is high up on the cave wall behind you. 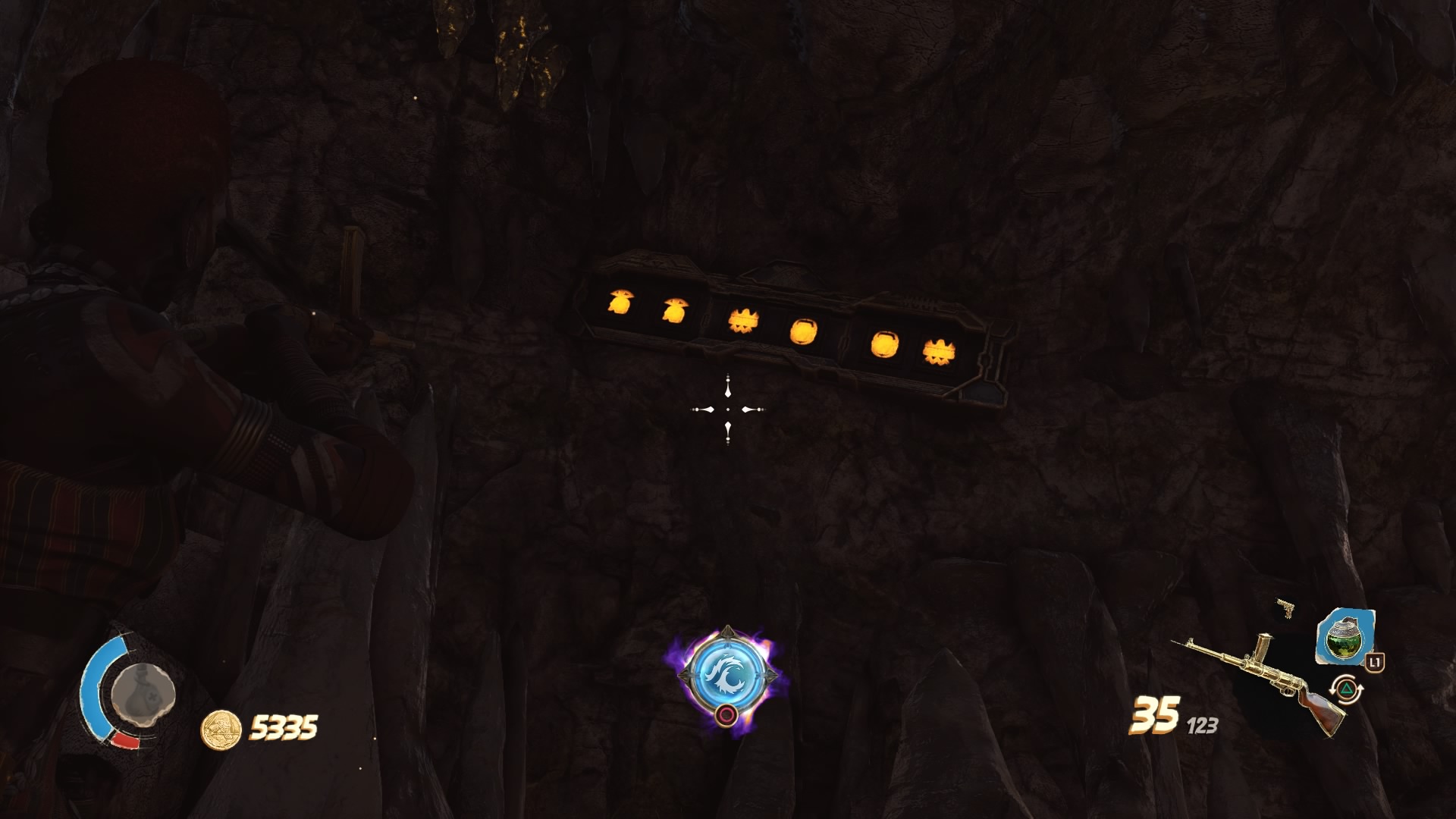 At the end of the path is a chest behind some wooden planks.

Once you’ve collected the antiquity bear right in the cave and climb up to where there’s a bridge. There’s another Cat on the left as you go across. 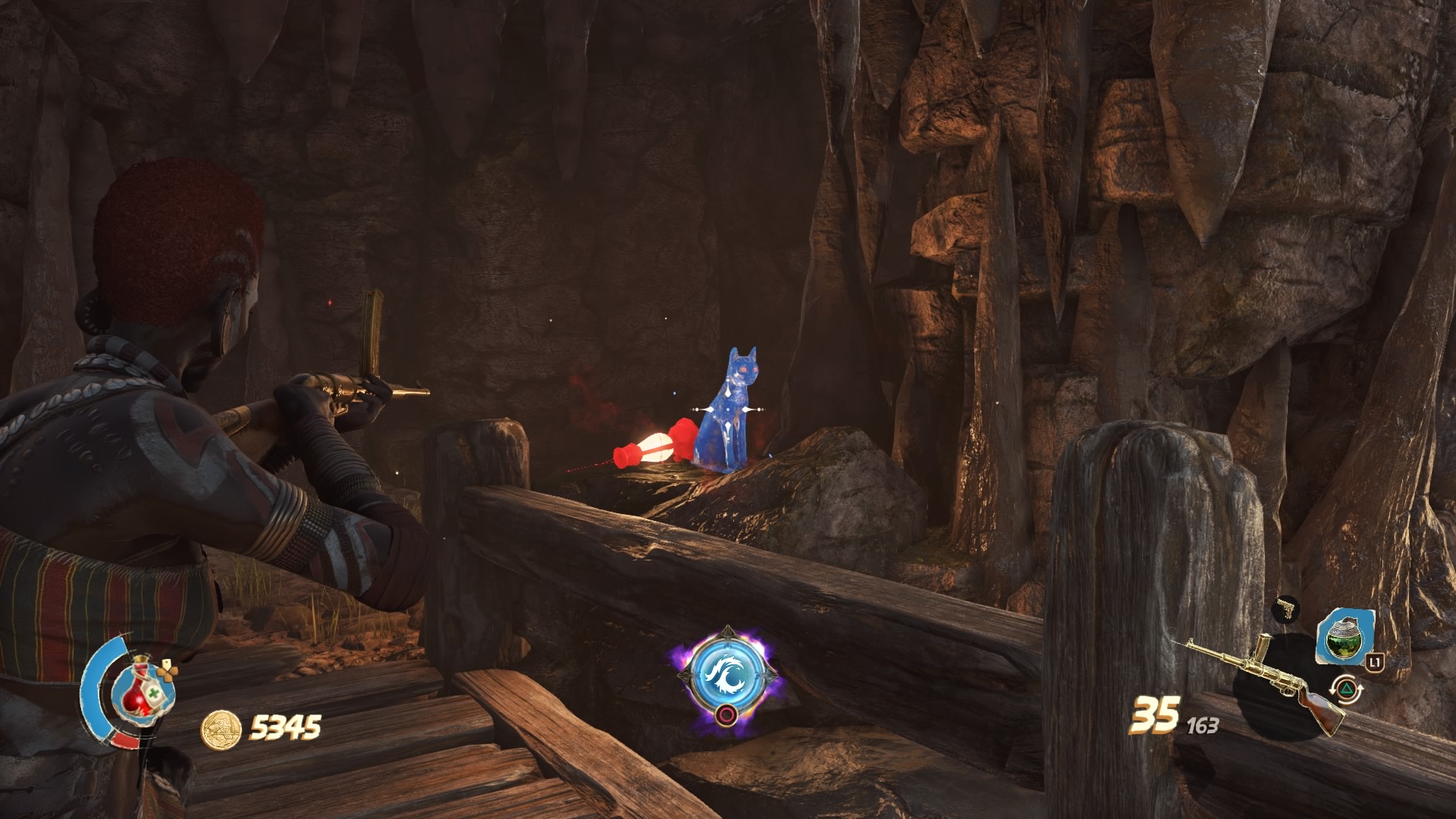 Jump down, then head right.

Use your amulet on the big blue crystal that appears and fight off the mummies that attack - this will clear the way forward.

Go around the corner and fight the mummies that come through the archway.

Continue fighting your way through the enemies and eventually you’ll reach Harbin’s Camp.

At the camp, go straight ahead and bear left into the lower area with a tent in. There’s another Crystal Cat on the left of the tent here. 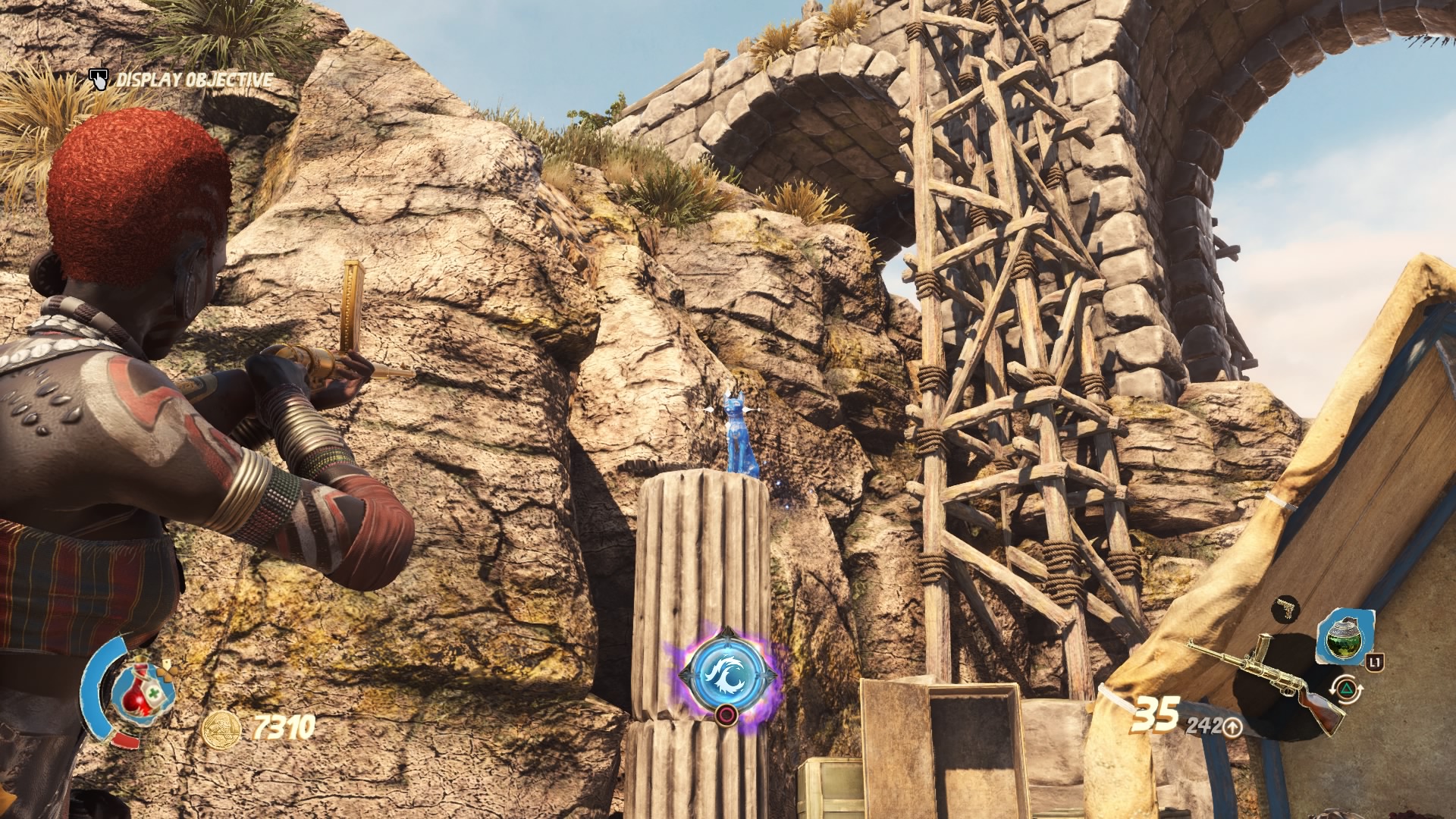 Go back up the hill and turn left, climbing up towards the main dig entrance. Use you amulet to activate the Sarab lock and turn back around.

Turn right as soon as you come down the stone steps and you should see the first blue orb through an archway a way in front of you. 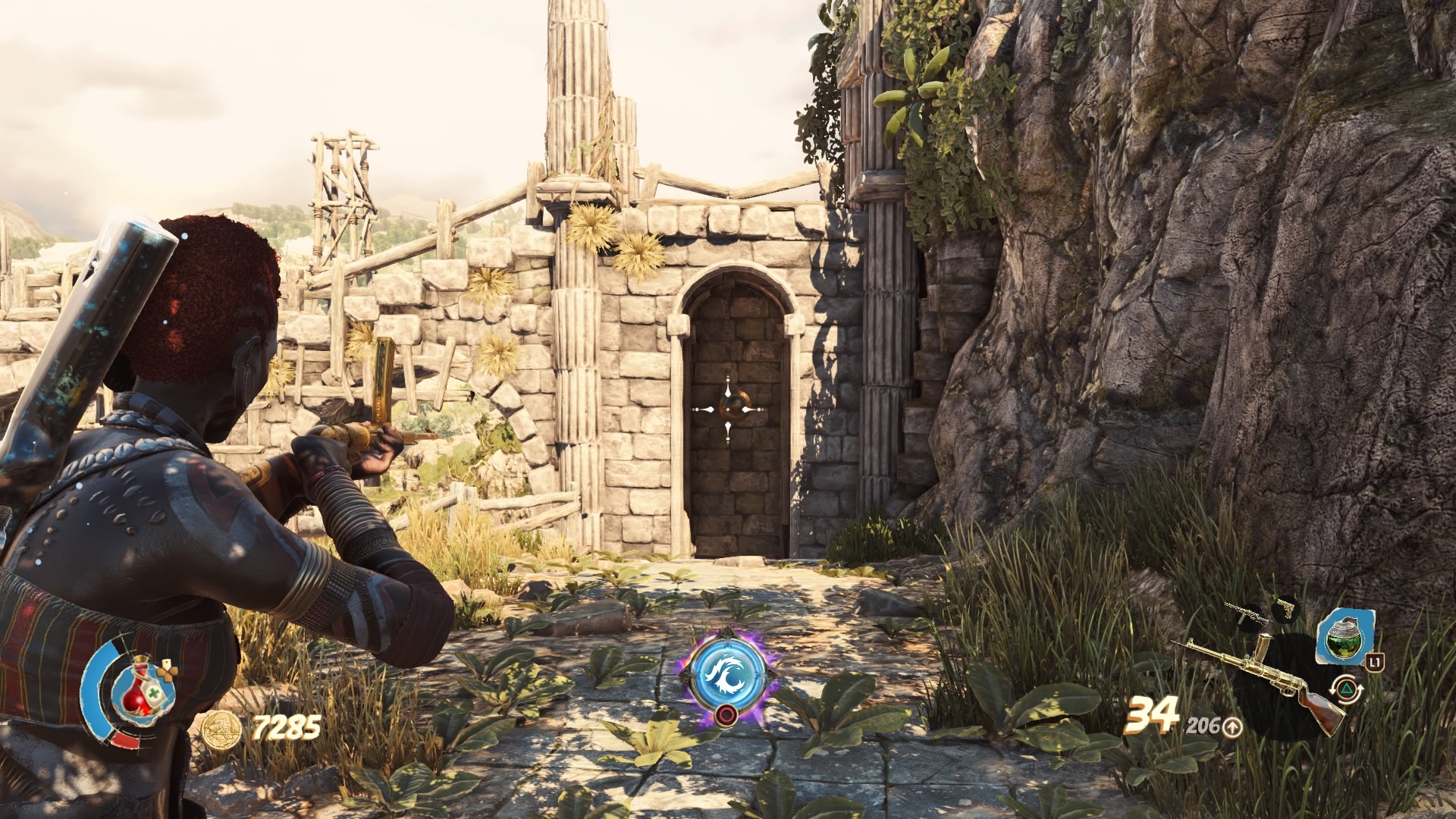 Head back to the central area, go across to the other side and up the hill. You’ll find another blue orb on your right, under the bridge through an archway. 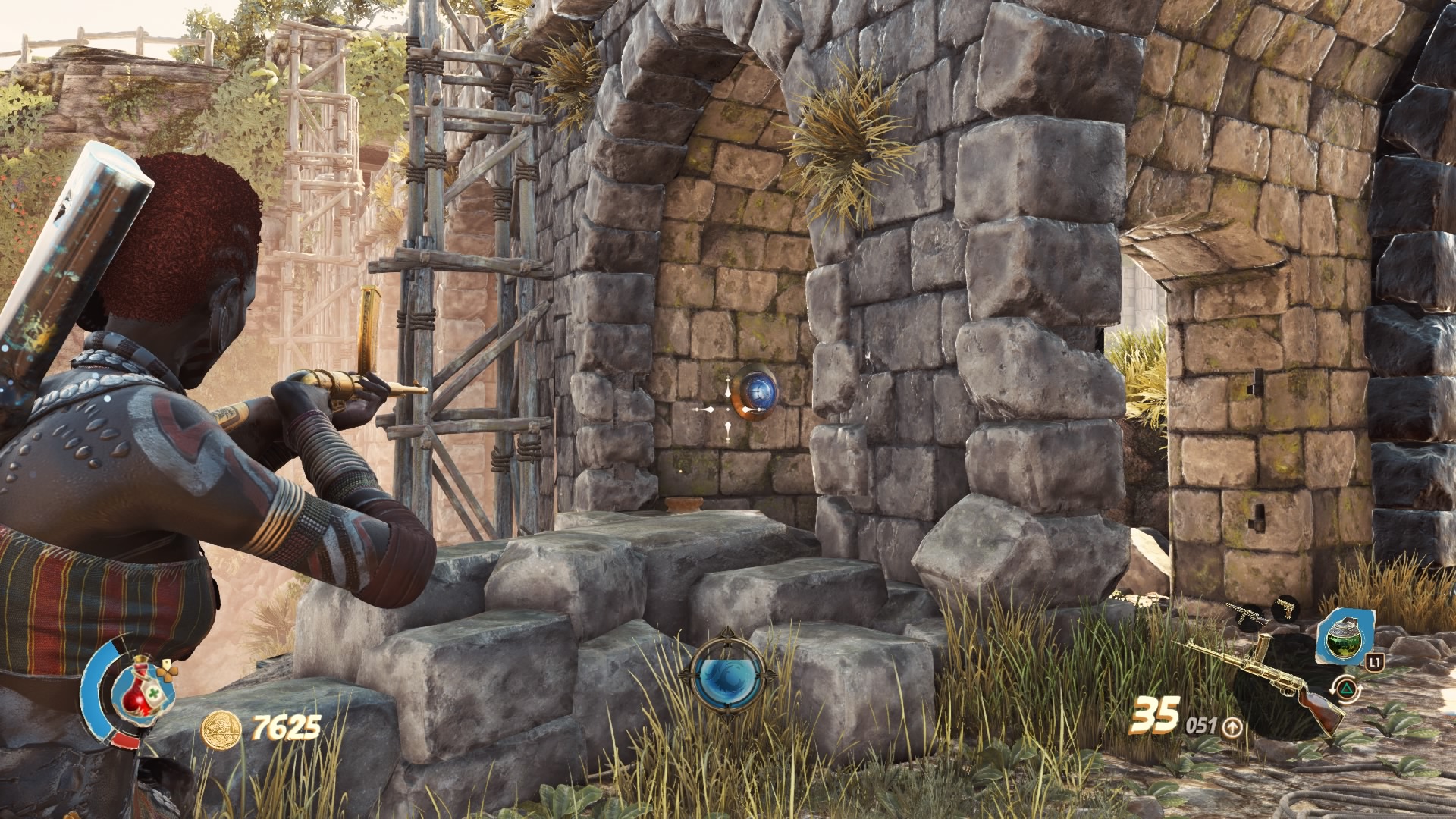 The final orb is back towards the entrance of the camp, high on the wall on the right. 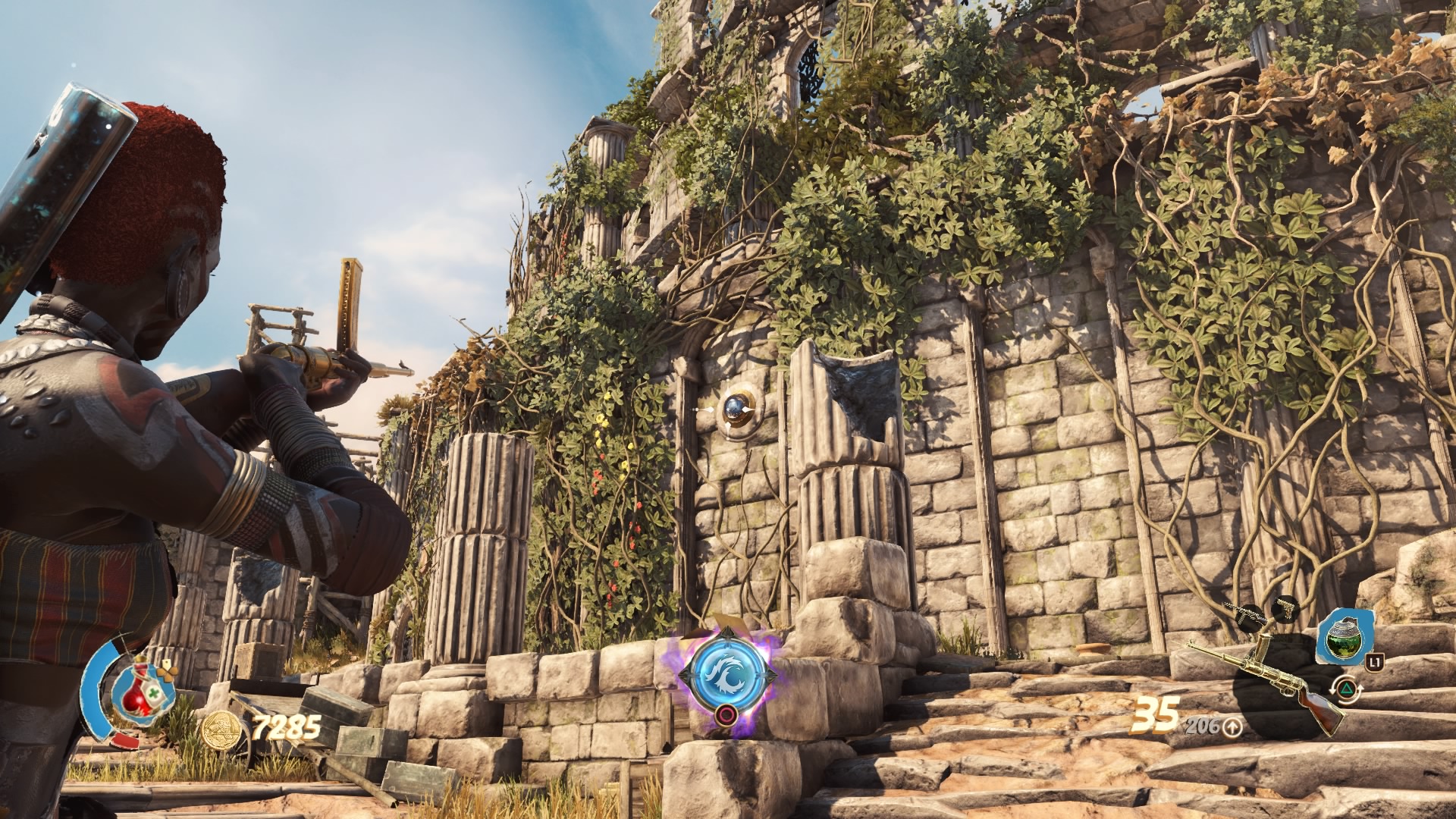 This opens the gate to the left of the final blue orb where you can grab the Scarab key. Above the door inside this room is the code to open the antiquity door in the centre of the camp. 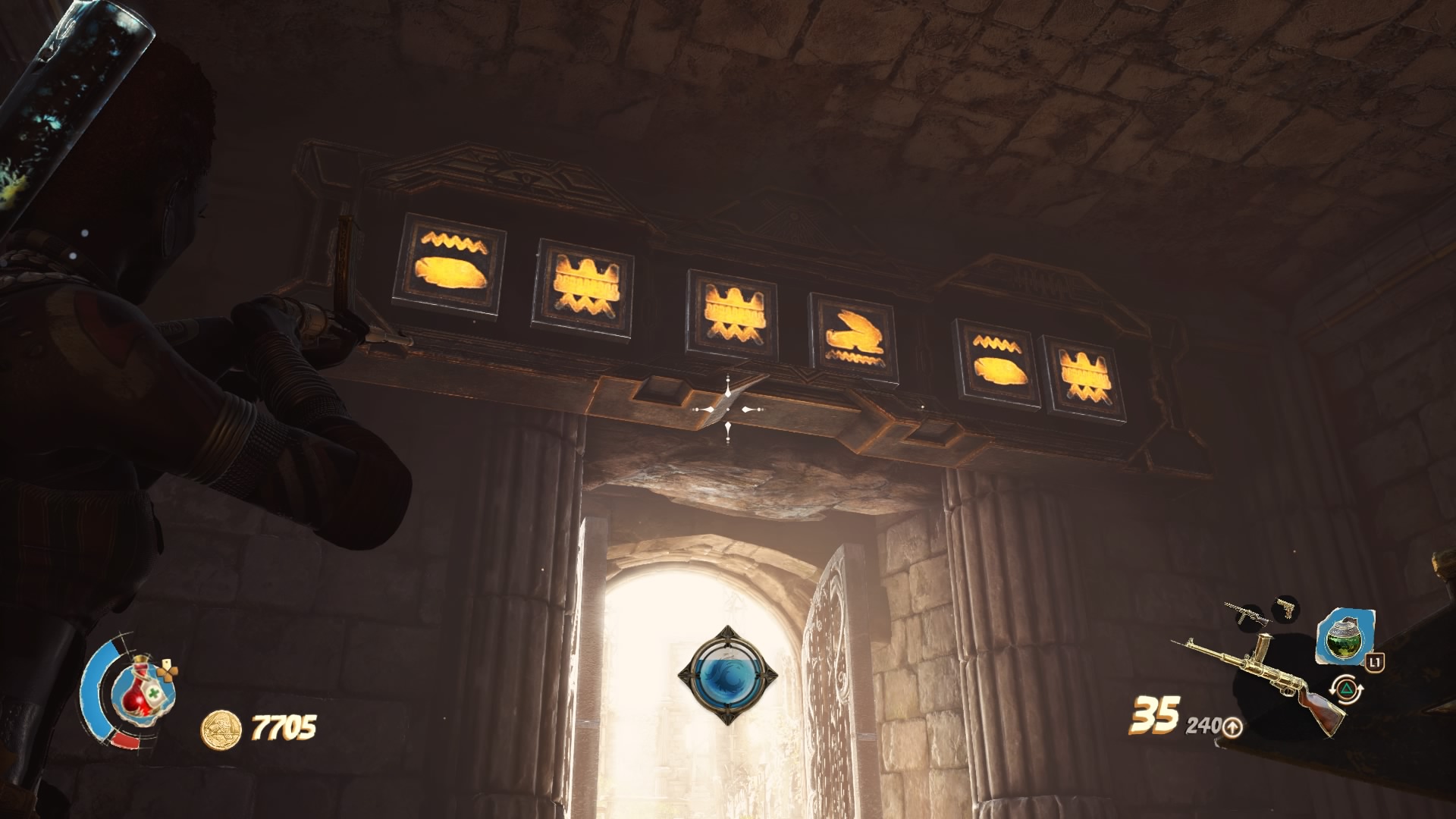 Go back up to the Scarab door and head on through.

Inside the temple you’ll come across a large puzzle on the floor, but first, head over to the right hand side of the room and use your amulet on the door.

It’s a tile changing mini-game where you have to make it so the light can travel from one end to the other. Just shoot the tiles so the light keeps moving towards where you need it to go. 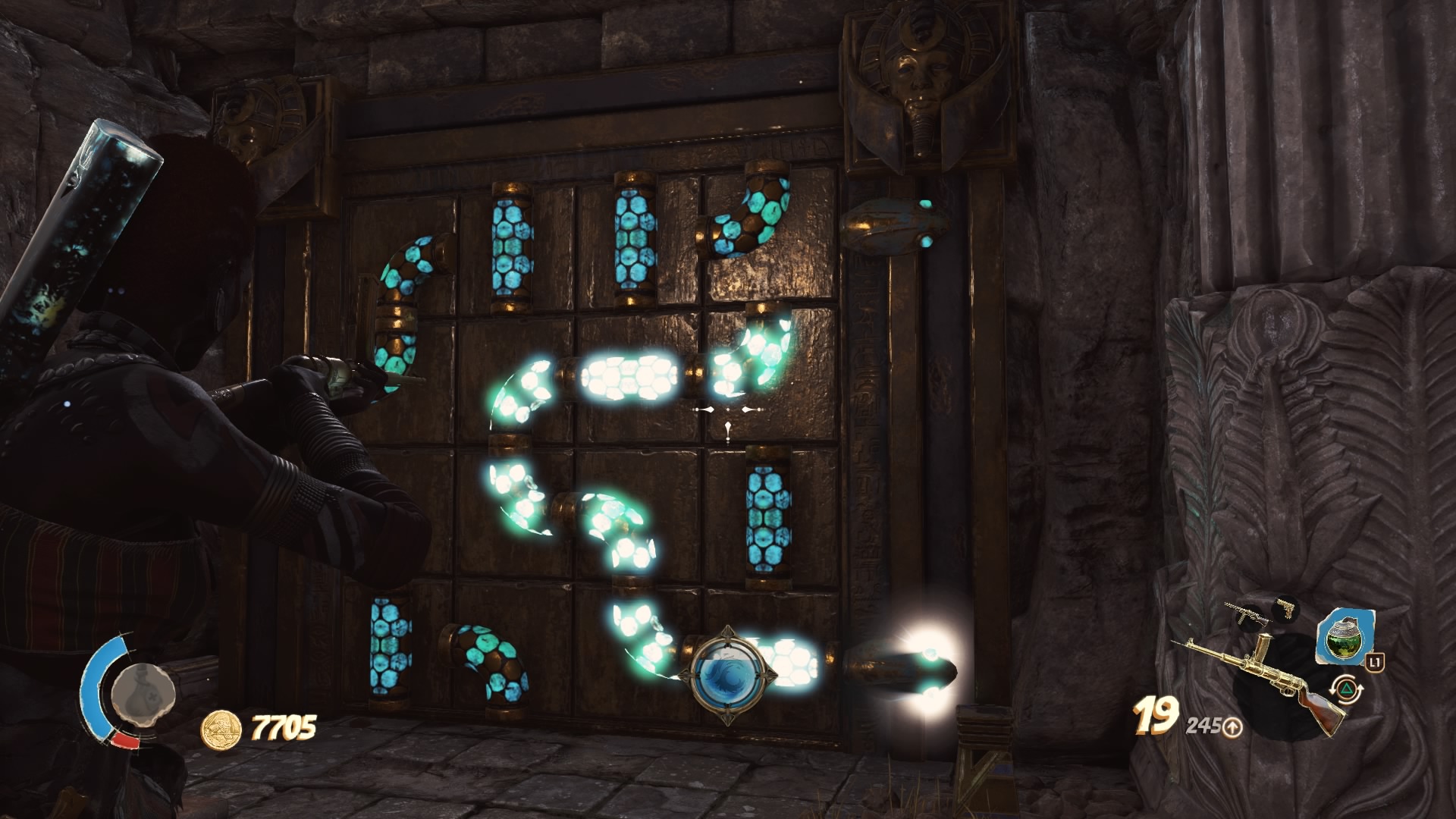 Inside you’ll get another Relic.

To get through the large floor puzzle, step on the tile that matches the glowing one displayed above the door. 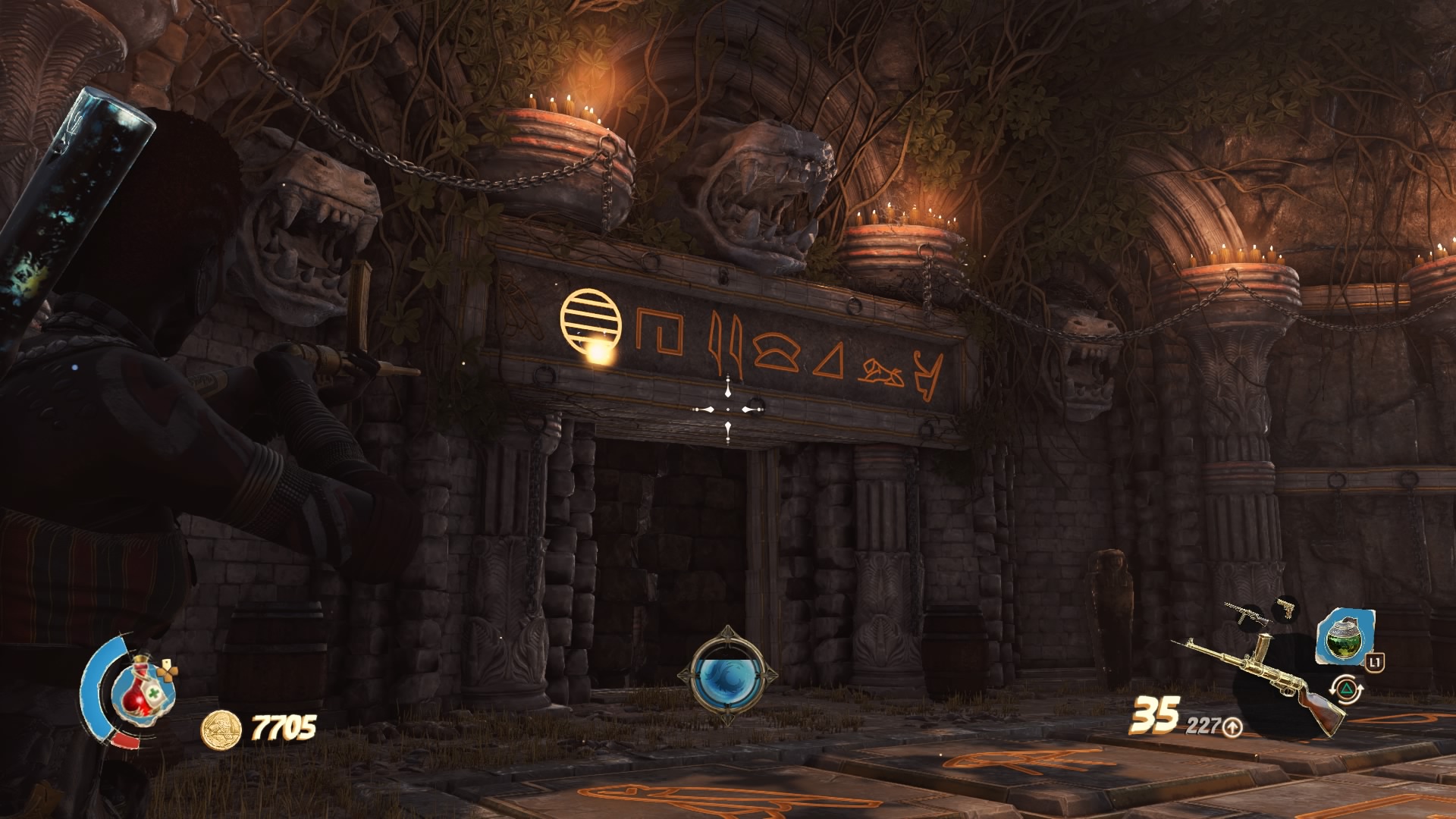 The tiles will connect to each other, so it’s not too tough.

The final Crystal Cat is right behind you on your right as you go through the now open door. 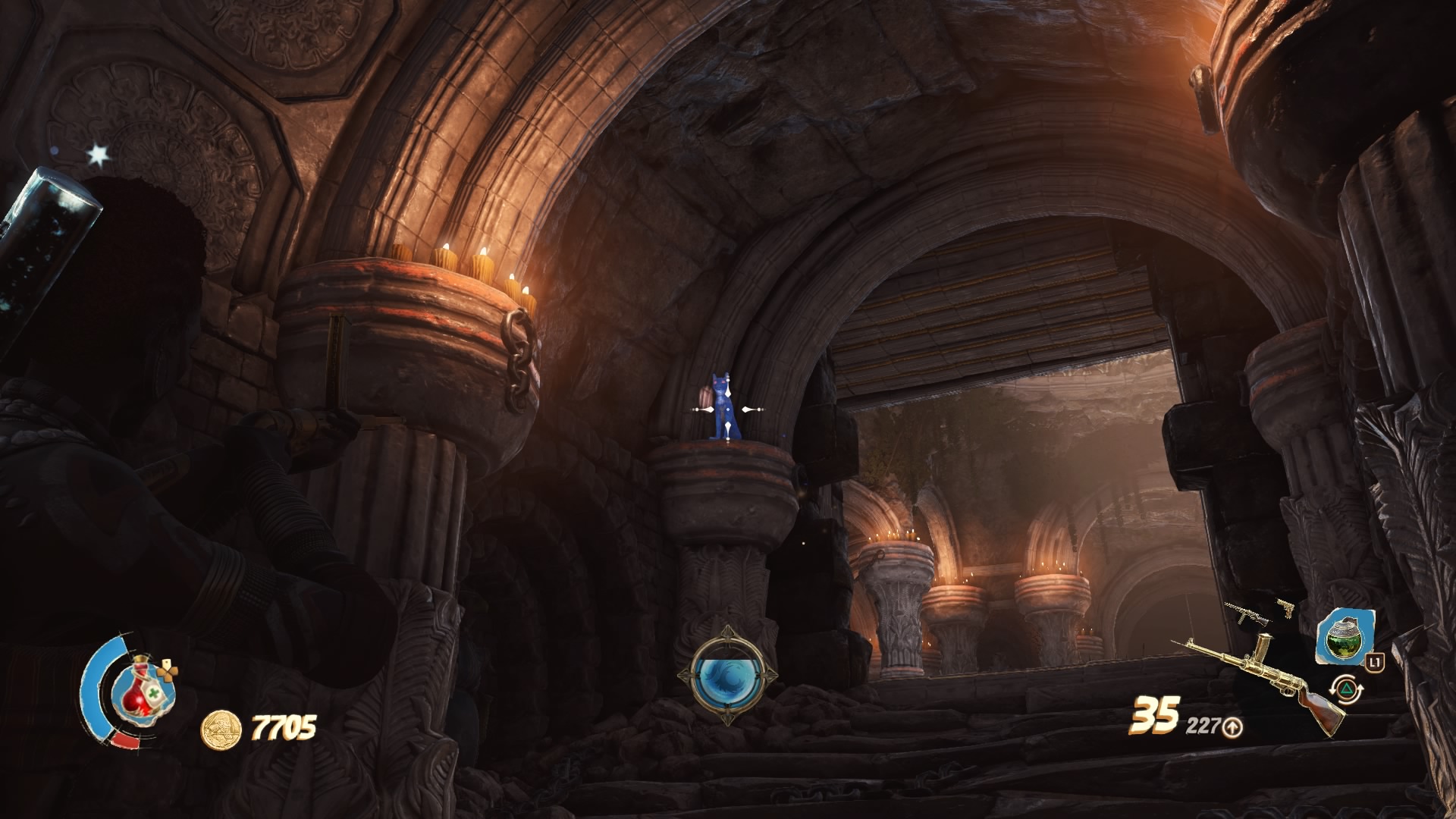 If you picked up all of the Cats along the way, you'll unlock a treasure room here filled with loot.

Continue down the corridor and you’ll reach the boss! He might be the spitting image of the legendary Mummy Boris Karloff, but if you keep your distance he should be too much of a problem. Focus your efforts on taking him out while avoiding his ground pound attack, then clean up the horde of weaker enemies using grenades.