As described in a new post from Major Nelson, the Arctis 1 Wireless for Xbox Johnny Silverhand Edition is inspired by Keanu Reeves' character in the CD Projekt Red title: Scuffed up, branded with a "no future" logo on one headset ear cup and a sort of firery demon-type-thing on the other, and "Samurai" emblazoned across its headband. 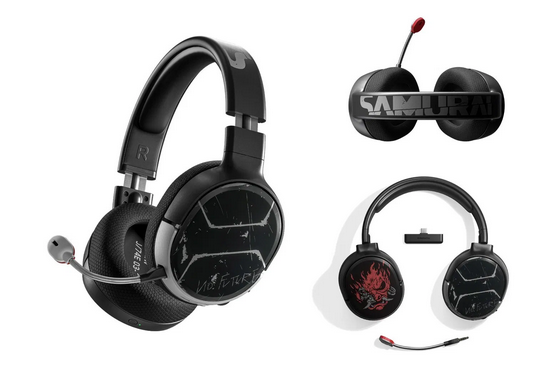 The headset features lossless 2.4GHz wireless with ultra-low latency on both Xbox and PC. There is also a detachable ClearCast noise-canceling microphone and a steel-reinforced headband.

The headset will be "extremely limited," reads the post, with pre-orders starting today for $109.99. Alternatively you can try to pick one up for yourself this June.

This headset reveal follows an earlier tease from Microsoft over the weekend of its upcoming Cyberpunk 2077 Limited Edition Xbox One X - slated for June. Last week Amazon Canada also put up a listing for a limited edition Cyberpunk 2077 Xbox One controller, which is apparently arriving on May 4.

Cyberpunk 2077 is due to launch for PS4, Xbox One, PC, and Google Stadia on September 17. If you’re looking for more Cyberpunk ahead of release, here’s everything else we know about the game so far.