Valve has shared some of its ideas about how it plans to improve the Steam storefront, including a feature that's just rolled out. 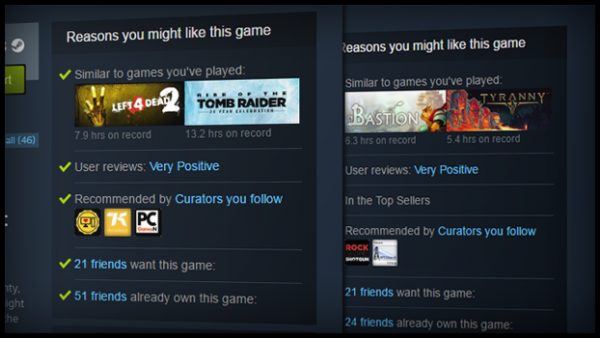 Valve made a small change to curation on Steam recently. The store now tells you why this or that game were recommended to you. When you visit a game's page based on a recommendation, you'll see on the right a list of reasons why this game was recommended.

To explain the reason for this change, and outline the company's higher-level plans for the future of Steam, the developer wrote a lenghty blog post about how it can meet the needs of players and developers, despite their widely varying tastes.

To do that, Valve broke down the different players and developers that use Steam into these groups:

In Valve's view, a successful store would be able to treat these different people fairly. This gets tricky when you realise that the interests of these groups don't often align.

"It might seem obvious that developers have some competing interests, but it's also true on the player side - some players specifically enjoy exploring Early Access titles, while others never want to see them," the company wrote.

As such, Valve doesn't want to be the only group that decides what's best for everyone, and it's why it strives to make a store for everyone, according to the post. The company does, however, do basic checks to make sure games work before allowing them on the service.

This feeds into curation, and the new update added to recommend games. This, as Valve puts, is the company's way of exposing the algorithm responsible for making these recommendation. By spelling out why game X was recommended or not, Valve hopes players will understand the system better, and thus help improve it.

In the coming weeks, Valve will pen two more blog posts. The first will deal with the ways some are exploiting the Steam store and how the company is going to combat that. The third and final one will reveal the new Steam Direct system, including the fee, as well as how different it's going be from Steam Greenlight.