If toys-to-life in 2018 is a brave venture, then Ubisoft is playing it safe with the gameplay side of Starlink: Battle for Atlas.

While industry juggernauts such as Disney and Lego have already left the scene behind, Ubisoft Toronto is hoping to carve out its own niche with a bit of a different spin on the genre. Instead of unlocking fresh content by purchasing new characters, you play through essentially the same game regardless of the set you have, with different types of ships and weapons sold separately.

Weapons have different elemental types, some of which remove certain obstacles or combine with each others to solve puzzles. You don’t get all of the types with the starter set, so it’s reasonable to assume that at least some stuff will be inaccessible unless you pick up some extra packs. Not the most fun, but at this point it seems like a more complete package than other toys-to-life offerings.

The Gamescom demo we played began in outer space with an objective marker beckoning us towards the surface of an alien planet. But before you jump into the game proper, you can snap your pilot onto Starlink’s controller mounted peripheral, first adding the base of a ship, then your choice of wings and weaponry. The parts you choose change your ship’s speed and other stats in-game, and you can feel a demonstrable difference between movement-focussed vehicles and tankier craft.

It’s been said before, but the models themselves are chunky, well-detailed, and clip together will an almighty thunk that’s as satisfying as hammering the last nail into an accomplished piece of flat-pack furniture. The Starfox Arwing you get with the Switch version of the game is a really nice Nintendo exclusive too, and doesn’t jarr with the look of the other ships.

Descending from space, as the atmosphere of the onrushing world fills your field of vision, it’s hard not to be reminded of larger space sims like No Man’s Sky, but once you touch down it’s clear that Starlink is a much more guided experience - closer to a standard modern open-world game - stuffed with icons for hidden caches to uncover, enemy enclaves to liberate, and a mapful of other diversions.

You have some freedom to explore Starlink’s seven planets, but higher levelled enemies serve as a funnel to coralle you onto the hand-crafted route. With that said, the planet in the demonstration was plenty big, and felt the right size given the variety on offer.

Once you get closer to the surface, you can keep whizzing through the skies or zip along the ground like a hovercraft - scanning animals, fighting bandits, and keeping an eye out for loot. On the way to our quest objective we come across multiple points of interest, and hopefully the full game keeps up the same density of activity across the whole galaxy. 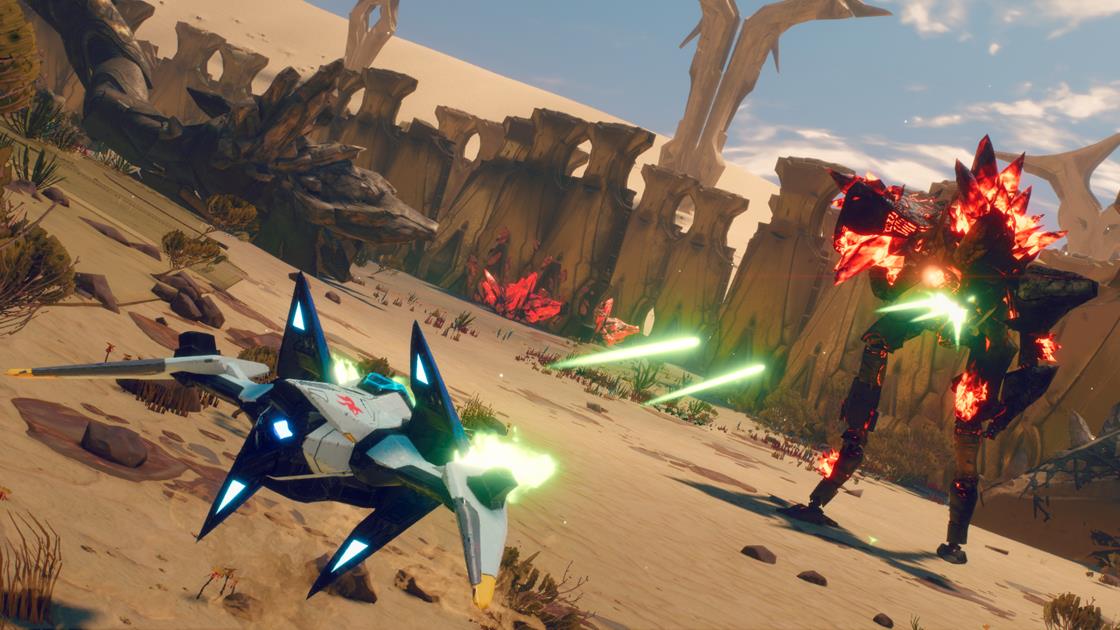 The story itself centres around the invasion of The Forgotten Legion, who’re trying to round up ancient advanced technology to bolster their imperial efforts.You’re trying to put together a team to stand up to them, recruiting aliens from the planets you visit to join the cause. The parts we saw of quests were really well presented, with fun “Help me Obi-Wan Kenobi”, Princess Leia-style blue holograms instead of dialogue boxes for the characters, while the mission structure was pretty straightforward - go to a place, blow up some stuff, solve some puzzles, bring something back to trade; that sort of stuff.

It’s an engaging core, and it’ll be interesting to see how it wears across the whole game as opposed to a truncated play session. But at this point, it looks like it’s served Ubisoft Toronto well to concentrate on making the base game a cohesive experience rather than piecemeal character packs.