A new developer blog update for Stardew Valley notes we can expect the long-awaited multiplayer mode to arrive this spring - at least in beta form.

Chucklefish had planned to launch a multiplayer beta before the end 2017, but moved it to Q1 2018 in order to make room for polish and QA.

Stardew Valley version 1.3 will not only add multiplayer, but additional language support for French, Italian, Korean and Turkish.

According to Eric "ConcernedApe" Barone, work on new game features is complete, and additional content's text has been sent off for translation.

In the meantime the team is working on bug fixes, and once the translated text has been integrated back into the game, a QA phase testing all the new features will commence.

This applies to both Stardew Valley multiplayer and single-player.

"When that is finished, the update should be ready for a public beta," said Barone. "I am still shooting for a spring release for the beta.

"When the beta gets closer to launch, I’ll fill you guys in on more specifics as to how multiplayer will work, as well as a more complete list of the new features in the update. I’ll also be sure to let you guys know as soon as we’ve determined a more concrete timetable for release." 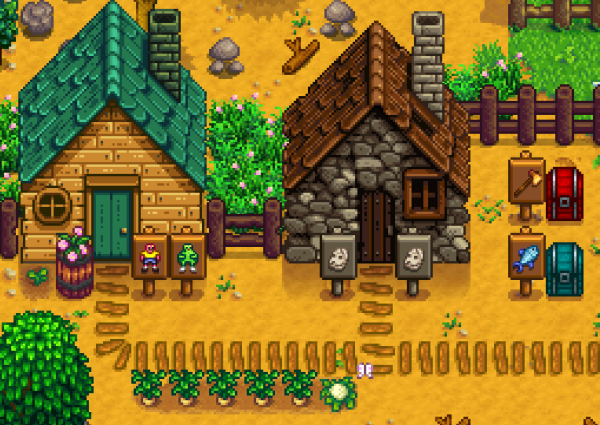 ConcernedApe is also working on more new content to be released along with the multiplayer update, and one such addition is signs.

Signs are a crafting item, and looking over the screenshot, these will come in handy. Sure, you can change the color of your storage chests to help you determine what's inside - but a sign with a fish on it will help quite bit. Especially if you can't remember which colored chest contains what or you happen to be colorblind.

One of the interesting aspects coming with multiplayer will be the ability for Stardew Valley players to marry one another, and dance with them at the Flower Dance (can we have a dress option for this please?).

Friends will also be able to farm, fight, fish, forage, and mine alongside the main player. Each player will also have their own inventory and when not connected, it can be managed by using the chest in their cabin - which Robin will build for you.

It sounds like things are coming along nicely, and we can't wait to try the Stardew Valley beta out in the spring.