Hands-on with CCP's new ball-dodging 'v-sport' - it's a good'un. 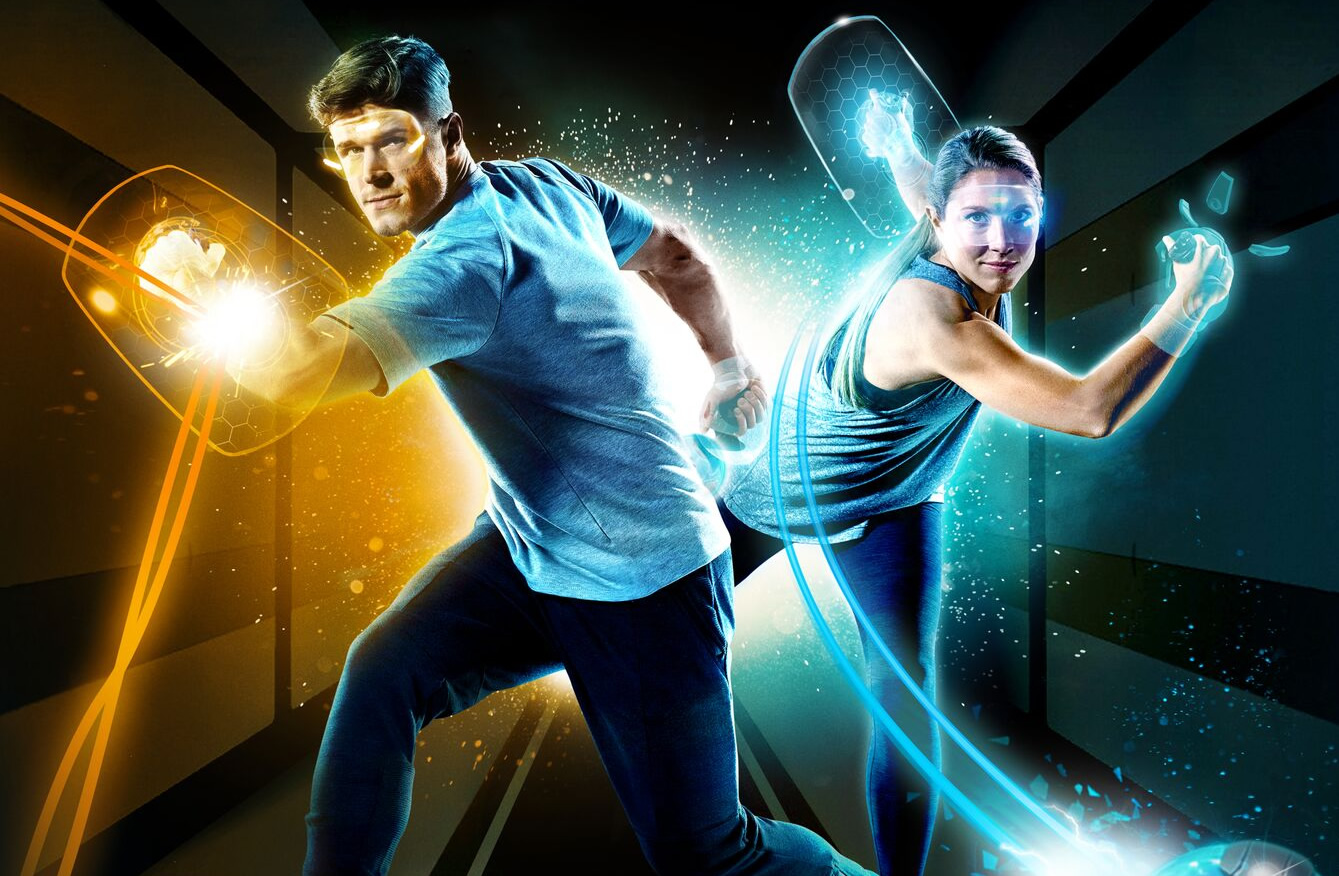 "Sparc is the type of VR game that I've been waiting for - a convincing full-body experience that would truly only work in VR."

I'm still struggling to decide if I really care about VR. For a few weeks after the launch of the PlayStation VR I went a bit VR mad: Matt reviewed it, but I was so intrigued that against his advice to wait before getting into VR I picked one up on launch. VR is a novel toy at any rate: it led to an amazing and hilarious night with a bunch of drunk friends hopping into Sports Bar VR and Sony's London Heist for their first-ever VR experiences, but then I was pretty much done.

I didn't plug it in for over a month after that until I tried it for Resident Evil 7. That game is amazing in general and is enhanced in many ways by VR, but I ultimately decided I preferred the sharper visuals and on a regular screen. That was that. Every now and then I'd feel weak and speculatively browse prices for the Oculus Rift or HTC Vive before remembering that I still don't use my PS VR. There was just no point.

Sparc is the type of VR game that I've been waiting for - a convincing full-body experience that would truly only work in VR. I had a blast playing it even though I was smashed to pieces in all three of the games I played by occasional VG247 freelancer John Robertson. I might just be crap, but thankfully it was fun despite getting trounced.

The quickest and closest comparison to make in order to explain Sparc is to bring up a couple of other of games: Pong and Dodgeball. Imagine Pong with a crucial twist: your body is both your paddle and the score zone. You have to use your hands to catch or bat away the projectiles fired at you by your opponent, but if you're not quick enough and are hit by the ball that counts as a score.

That introduces the dodgeball aspect - the body tracking enabled by the VR headsets allows you to duck and weave like a mad man if you don't think your reflexes or coordination are going to be enough to dodge the ball, and everything is made more complex by the fact you can put spin on the ball or send it pinging off the walls and ceiling of the arena to throw your opponent off.

It's all very Tron, and very different aesthetically to everything CCP has done before. CCP has of course experimented in VR before with EVE Valkyrie and EVE Gunjack, but this is their first project in quite a while that's taking a step outside the EVE universe. There's no lore to speak of, really - CCP is describing Sparc as a V-Sport and that seems pretty accurate - it's about real-world people duking it out in a cool Tron-like environment and there's a welcome purity to that.

One other twist in the game's design really defines Sparc: both players have their own coloured projectile, and when you're holding yours you get access to a large flat shield in whatever hand you're holding it in. Both projectiles can score, so if you're clever you can use your shield to bounce an opponent's projectile back at them. Because they've thrown their projectile this makes them shieldless, making their own options a dodge or to try a block with a bare fist which is much more difficult than with the massive shield.

"If you give yourself over to Sparc's concept you'll find yourself ducking and diving around and it all feels satisfying, and comfortable. It's already up there as one of the best VR games I've played."

This leads to an interesting ebb and flow, albeit one I never quite mastered across the course of three five-minute sessions. There's a big question about when to throw your ball and thus lose your shield and when to hold on to your shield in the hopes your opponent gets impatient and attacks. There's further incentive thanks to the fact that your shield shatters on impact with a ball, and the only way to restore it is to throw your ball and catch it on the rebound.

As is very well documented, I love fighting games, and a similar meta evolves here - you might shimmy about to try to entice a throw, or even feign a throw only to stop short and raise your shield and so on. The avatars that represent the players seem impressively accurate in their tracking, so while I'm not able to swear at John across the virtual space I am able to make a throat-cutting motion at him when I finally get the hang of the controls and score.

As I said earlier there's a refreshing purity to Sparc. It doesn't bugger about with all the extra frills: it's a raw multiplayer game that'll have matchmaking and support all three major VR headsets that is focused on being fun and simple to get to grips with. A few minutes are enough to understand its rules and controls, and simplicity is in a sense bliss. You've only one button to worry about that's held to catch your ball - everything else is just about natural body movements and momentum. 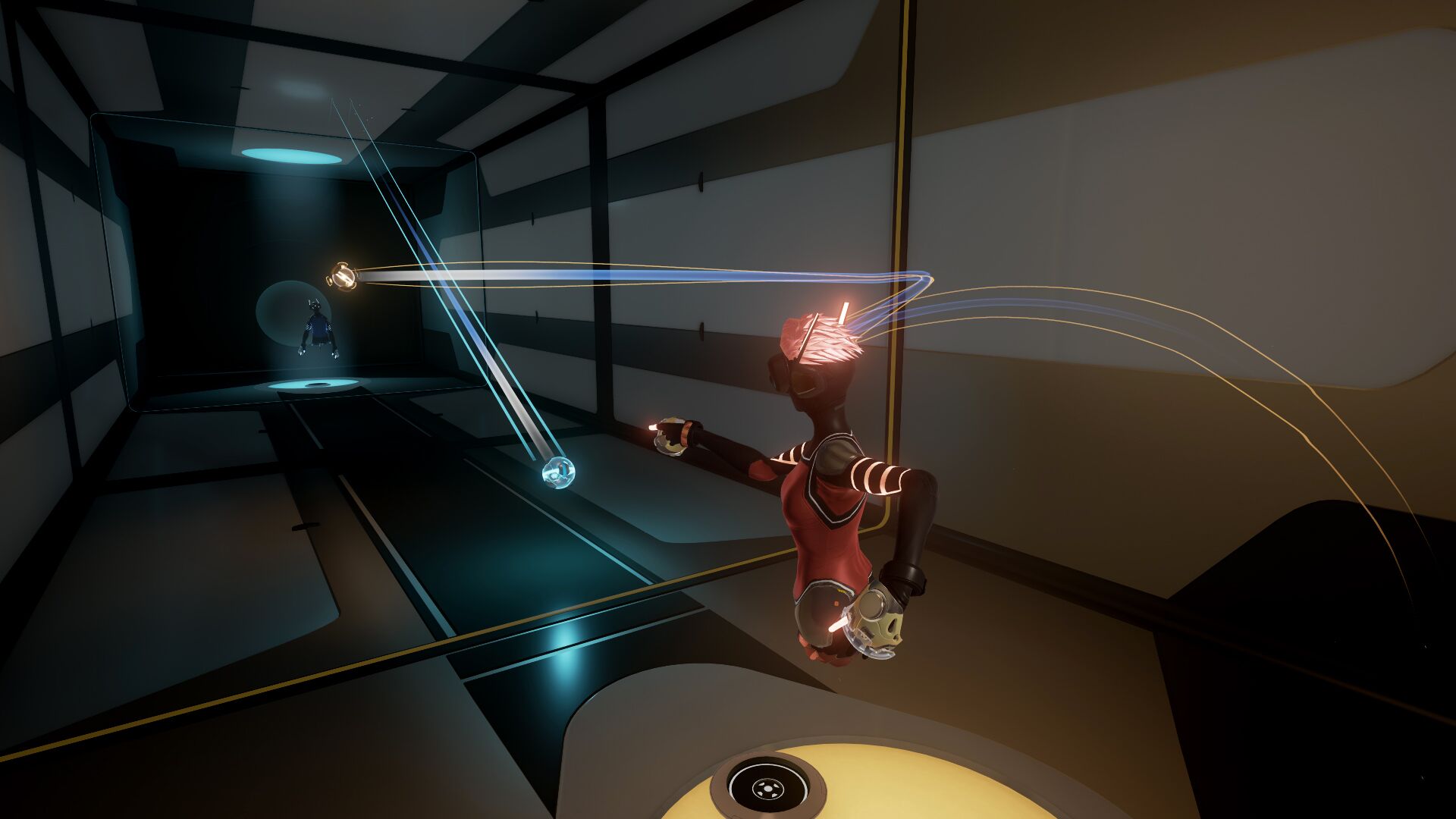 "A few times in the match I try to take a step back and feel my heel catching the cable that drapes down from the Vive behind me. I'm constantly uneasy that if I move too quickly I'll likely break my headset, my neck, or both."

If you give yourself over to Sparc's concept you'll find yourself ducking and diving around and it all feels satisfying and comfortable. It's already up there as one of the best VR games I've played.

There's clearly much that still needs to be figured out - I was told that match length is something still in the air and that the team is still working on making sure all types of throws such as overarm tosses are tracked equally, but what I played was enough to convince me that I want more of this.

Sparc's biggest challenge remains the challenge for all of VR: the hardware. The Rift, Vive and PS VR are all expensive propositions. There's also wires to deal with, never ideal for a game this physically active. A few times in the match I try to take a step back and feel my heel catching the cable that drapes down from the Vive. I'm constantly uneasy that if I move too quickly I'll likely break my headset, my neck, or both. That's not good, obviously. This is the stuff that's challenging, but as these headsets get lighter, sport thinner cables or better still, are wireless, this aspect of VR will cease to be an issue.

One other small hurdle is that Sparc feels like it'll be best when played opposite someone with people watching. I can imagine this being amazing as a party activity with two headsets, two screens and spectators (which is how it was set up at the event, incidentally) but that's ludicrously expensive. Will online be the same?

Concerns about the headset situation noted, CCP clearly gets it. Sparc is the kind of game VR needs - the kind that if demoed widely would pique many a person's interest - until they see the headset prices, at least. Many of the shooting galleries and fun, dumb 'do weird stuff' sandboxes I've seen have been enjoyable, but Sparc definitely has the sort of x-factor to its core gameplay loop that really sells what VR can do differently. I'm excited to play more of it.

Disclosure: This hands on took place at EVE Fanfest 2017 in Iceland, the home of CCP Games. CCP provided travel & accommodation.