Stace Harman dons his oversized armour and hunkers down to roll his virtual D6 dice as he takes a look at Full Control’s upcoming take on a classic table-top sci-fi adventure.

Space Hulk is based on Games Workshop’s 1989 board game of the same name. Developer Full Control is utilising the 3rd edition rule-set, which was released in 2009.

Space Hulk is expected on PC this autumn with an iPad version to follow. Cross-platform play will be supported.

Both head-to-head and co-op multiplayer will feature and both will be playable online or via hotseat mode.

The initial campaign will be based on the Sin of Damnation storyline, campaigns are planned further down the line as is a level editor for players to create their own levels.

Games Workshop’s table-top products often rely on an intrinsic degree of chance when it comes to determining the difference between success and failure on the battlefield.

It’s fitting, then, that there should be an element of randomness in how Danish developer Full Control came to be working on a digital version of the 1989 board game, Space Hulk.

For years, company CEO Thomas Hentschel Lund had been pitching the concept to long-term Warhammer 40K licence holder THQ, but his metaphorical D6 dice-rolls had had failed to find a chink in the publisher’s stubborn armour and he’d been refused or otherwise completely ignored.

Then, at GDC last year, Lund had a chance encounter with a certain Mr Ian Livingstone, a co-founder of Games Workshop. Lund’s impassioned recounting of his own desire to recreate classic board games in digital form, and in particular Space Hulk, caught Livingstone’s imagination.

This chance meeting by an open fire in a hotel lobby was even more serendipitous because it wasn’t until Livingstone handed over his business card at the end of the conversation that Lund realised to whom he’d been accidentally pitching. Without knowing that he was even rolling the dice, Lund had come up with double sixes.

THQ’s collapse earlier this year, along with Livingstone’s introduction of Lund to the head of licensing at Games Workshop, cleared the way for Full Control to pitch its proposed treatment of Space Hulk directly to the 40K gatekeeper.

To Lund’s delight, his company’s passion to create a video game that is faithful to the board game’s structure, pace and rule-set was rewarded and Full Control was granted its long sought after licence. All of which explains how it is that I come to be stood with Lund at PC expo Rezzed as he talks me through the key features of his company’s vision of the twenty-four-year-old board game.

Lund highlights that Space Hulk’s 15 level single-player campaign, the head-to-head versus mode and the currently undetermined number of co-op levels are designed to recreate the tense atmosphere of the board game by being very challenging.

While Space Hulk draws heavily on its roots, both for its difficulty level and mechanical nuts and bolts, Full Control is also looking to include other, more recent influences and so an XCOM-style action camera is occasionally utilised to show a more dynamic view of the action.

In addition, having moves tracked by the computer rather than by feeble human memory means you there are no concerns of losing track of who’s done what and so you have greater flexibility to swap between Marines mid-turn. This allows for a more unified approach as you swap between your Terminators mid-move to react to threats as they are revealed on the map, which again calls to mind the two-stage movement approach necessary to survive XCOM’s tougher difficulty levels. 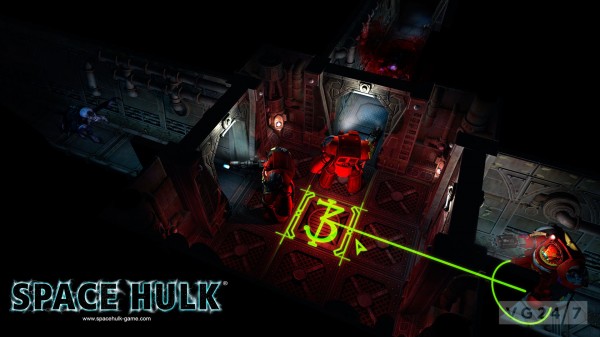 There are minimal UI constraints or fiddly obstacles to impede your ability to charge headlong into the fray but while your company of Blood Angel Terminators are imposing and suitably massive, their fragile mortality will quickly be exposed to fools that rush in.

Should you allow your units to become surrounded or fail to save enough command points to place them on overwatch, the inexorable march of so many Genestealers will cut through your squad like a powersword through butter.

Sadly, it’s something that I experience firsthand. Skipping the three-level introduction that’s designed to teach Space Hulk virgins the importance of creating kill-zones in narrow corridors, the necessity of overwatch and the Genestealers lethality in close quarters, I jump straight into the first “suicide mission” of Space Hulk’s 12-mission Sin of Damnation campaign.

My performance is disastrous. After a promising start in which my Terminators tentatively explore the ship layout on their way to flaming the command room, a number of random dice rolls go against me. As each Genestealer unit is revealed as a blip on the radar, virtual dice are rolled to determine whether that blip represents one, two or three enemies, which soon results in my facing-off against a corridor full of multiple sets of three, multi-limbed menaces.

"Those without prior knowledge of Space Hulk but who warm to the idea of a challenging, tactical turn-based title should also continue to pay attention."

Considering my options, I flame the corridor and the wide spread of the weapon takes out several fiends towards the back of the encroaching pack. Unfortunately for me, the flames miss those Genestealers closest to me. This leaves me dangerously exposed and while ending my turn on overwatch enables a reaction shot on my opponent’s turn that takes out one of their vanguard, subsequent shots fail to connect and allow the Genestealers into melee.

It ends soon after in a savage flurry of tooth and claw. The demise of my lead unit allows Genestealers to pile into the room I’d been guarding and they quickly tear into the exposed backs of my other Terminators who I’d stretched in multiple directions to explore other areas of the ship. It quickly turns into a massacre and I have nobody to blame but myself.

Discussing my poor performance with Lund, I’m struck by how encouraging and heartening it is to hear him speak of both the individual game elements and the overall development of the project with such genuine enthusiasm and obvious affection.

After various attempts throughout the industry to apply the 40K licence to some ill-suited genres with some very mixed results, fans of board games should be excited by both the zeal and faithfulness with which Full Control is approaching its task here.

In addition, those without prior knowledge of Space Hulk but who warm to the idea of a challenging, tactical turn-based title should also continue to pay attention. Following the initial PC launch, Full Control will release an iPad version with cross-platform functionality, followed by a level editor to enable players to create maps for themselves and one another.

Full Control is almost ready to roll the dice on its take on a digital board game. The developer will be hoping to score a critical hit when Space Hulk launches via Steam this coming autumn.