Sony expects the disc version of PS5 to be profitable by next month.

This is according to SIE president and CEO Jim Ryan, who recently told investors the standard edition of PS5 will be profitable by June.

"I’m pleased to say that the PS5 standard edition will break even from next month’s production," said Ryan (thanks, VGC). "And from then on, we project that it will gradually become increasingly profitable."

That's a nice projection considering the console is said to be selling at a loss at the moment, which is normal as noted by industry analyst Daniel Ahmad. Console companies recoup hardware investments through first-party game sales and services, plus a cut from third-party games and DLC.

Ryan told investors in a Q&A after the presentation that the console's standard edition "represents the very great majority of PlayStation 5 sales." Ryan then stated the company doesn't see the proportion changing during the current fiscal year; however, the company does expect to see a "slight increase" in sales of the digital edition, "but not significant." Ryan also said owners of the digital offering spent 8% more on full games and DLC than PS5 standard edition.

Looking over the presentation slides, it was revealed that more revenue was earned from games and peripherals in the last fiscal year than on consoles. This makes sense considering the late console lifespan of PS4 and customers looking forward to new-gen. The revenue split was 80% on peripherals and games compared to 20% on consoles.

But PS4 has some life left in it yet. 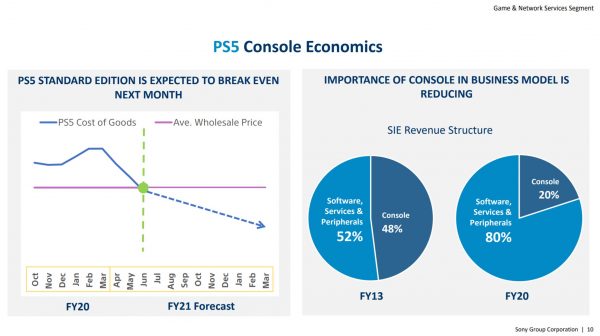 According to another presentation slide, even with the late-cycle of PS4, the console remains the main driver of PlayStation Store revenue. Last fiscal year, 95% of games purchased on the store were for PS4, compared to 5% on PS5. Sony expects that to change a bit during the current year with 70% of sales off the store for PS4 and 30% for PS5. The new console is a must-have at the moment with consumers, and being able to snag one is still harder than nails. But over 7.8 million folks have one in their household, and as more supply becomes available, the store numbers will change.

In Sony's latest financial report, Sony revealed it had shipped 4.5 million units of PS5 worldwide by the end of 2020, bringing the grand total to 7.8 million. This means that Sony hit its fiscal target of selling more PS5 units in its first fiscal year than PS4 did, as the console exceeded the number of PS4 shipments made during the same period in 2013-2014.