Sonic the Hedgehog rumours continue to roll on, and this time it appears Sega has trademarked something called 'Sonic Lost World'. 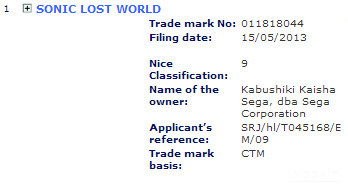 Siliconera reports that the trademark was filed on May 15, and was indeed carried out by Sega.

The filing follows rumours regarding the next Sonic the Hedgehog game, spawned after one gamer claimed he or she had played the game during an early testing session. Check out what they had to say about the supposed November release here.