Nintendo's online service might be cheaper than its rivals, but its first major online release is a swing and a miss when it comes to quality online play.

A little under a week ago, I published my pre-release review for Super Smash Bros. Ultimate. In that review I called the game the best Smash Bros. ever, but at the time I hadn't fully experienced the game's online offering. A week on, here's an addendum to that glowing review: this is still the best Smash ever, but if you're looking to play online be prepared for a spotty experience at best.

Before we get into it, I want to head off some of the ifs, buts and maybes likely to crop up in the minds of some. First off, I've got pretty bloody good internet; 300mbps fiber. Second, I own a LAN adapter for the Switch, so when I've played online it's been via a wired connection. Finally, I know what a fighting game should feel like online; I get on just fine with the not-exactly-perfect Street Fighter 5, with over 200 hours logged, many of them online. With that said - the Smash online is rubbish.

I feel compelled to make this clear in a separate article as I didn't have the opportunity to do as much before my Smash review went live. I should also note that the online woes wouldn't impact my core opinion of the game, which is glowing. Smash is most at home in local couch-based multiplayer, but it's important to note the online problems since a lot of people will be tempted to head online once they've unlocked all the characters to practice before playing with friends offline.

The game part of online, once you get in and get it working, remains magnificent. Did I mention it was the best Smash ever? But getting into a quality match and having that match represent the settings you actually wanted to play with isn't of the sort of quality I expect from a game you technically have to pay to play - even if that charge is only $20 a year. The fact that this is the first truly major online game release since the September launch of the paid Nintendo Switch Online service only makes this all the more troubling.

My primary problem with Smash Bros. Ultimate's online is actually in its online matchmaking system design. Gone is one of the smartest decisions from Smash for Wii U, the online split between 'For Fun' and 'For Glory' - meaning serious or party style ways of playing Smash. For Glory was all one-on-one with stricter rules: no items, basic stages and a quick-fire two lives. For Fun, meanwhile, was Smash as you often see it demoed by Nintendo - with plenty of items, hazard-packed stages and more than a dash of random chance in proceedings. The Smash Ultimate replacement for this system makes sense on paper, but in practice it leaves much to be desired.

The replacement system, 'Preferred Rules', lets you set more in-depth rule preferences before matchmaking. That's fine and all - it gives you more options for a start - but if the matchmaking service can't find a match it deems appropriate quickly enough, it just dumps you in another. That means you might be matchmaking for a one-on-one, no items, Fox-only, Final Destination slugfest but get matched into a four-player free-for-all on Mushroomy Kingdom with Pokeballs and Assist Trophies spawning every other second.

It goes the other way too - a less experienced player just wanting to have some fun in a similar vein to the offline modes can find themselves unceremoniously dropped into a dry, serious match on a flat level against a player who knows their combos for a relentless beatdown - which, you know, isn't fun. Not even the match format is sacred; you might prefer a free-for-all and get matched to a 2v2, or prefer stock and get matched to a time match. 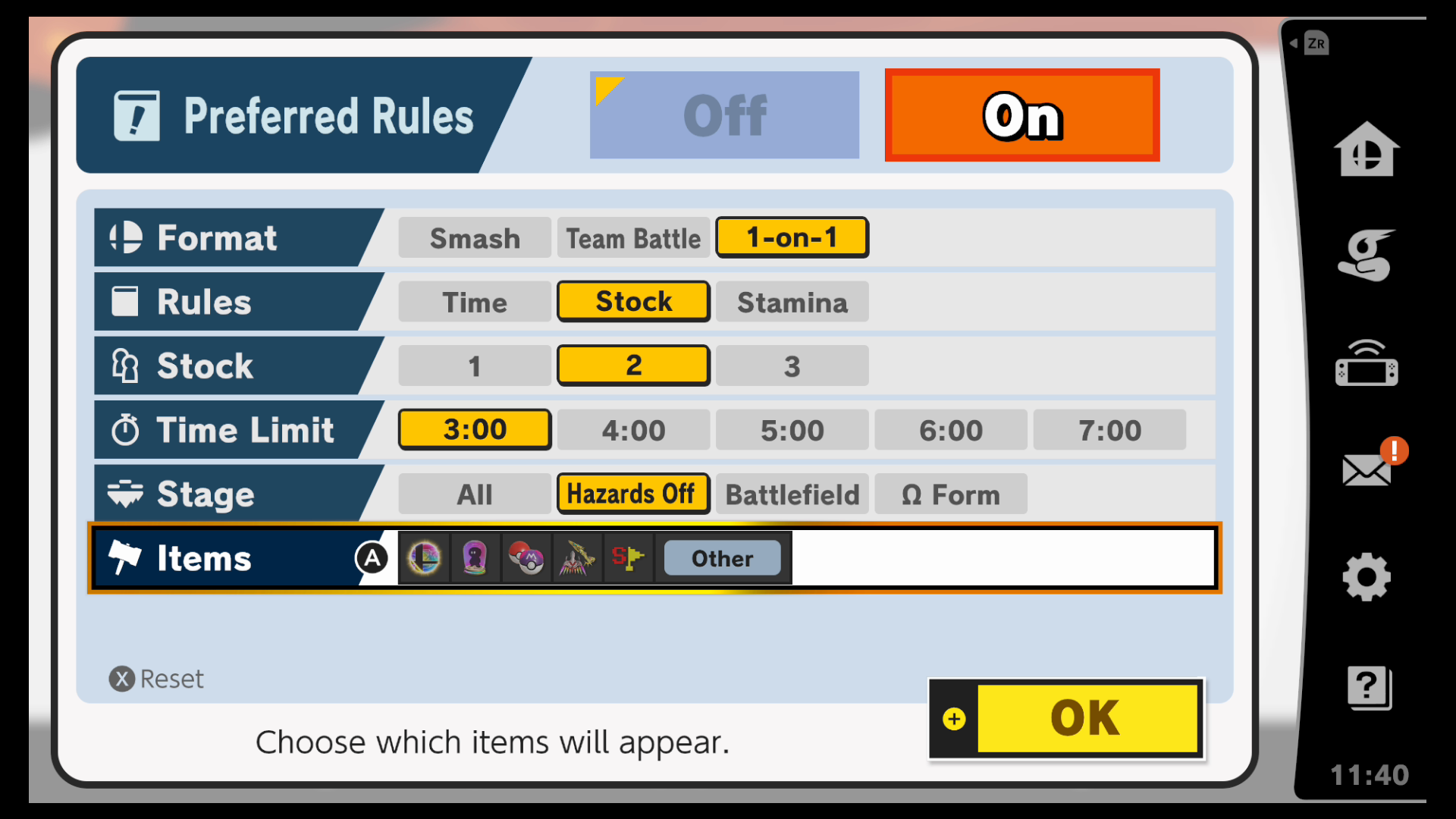 If you do end up in a match you don't fancy, you also can't quit easily. Smash Bros. Ultimate features some harsh anti-rage quit punishments (good!), but there's also no way to easily quit a match once you've been matched into it, even before it loads. You'll be punished. Eventually players are separated out thanks to high-end, skilled players graduating into an 'Elite Smash' league, but even then playing in Elite Smash is a choice, and one that's limited to the characters the game has deemed you good enough at playing as. Going back to Quick Match puts you back at the mercy of the matchmaking system as described.

This system is rubbish. The logic and intent is clear. Players shouldn't be made to wait, so if their preferred type of match isn't available, put them in another one. That makes sense, but as the saying goes the road to hell is paved with good intentions. Besides, it's difficult to believe there should be matchmaking problems when Smash Bros. Ultimate is shattering series and system sales records. In the end, it just means you all too often end up playing modes you don't want to play.

Then there's the netcode itself, which just... well, it isn't great. I've certainly seen worse travesties even within the realm of fighting games, but my experience can be described as uneven at best. When matches run smoothly they tend to be decent throughout - but when one goes wrong, the match outright pauses while the netcode struggles to catch up. In a game as chaotic as Smash, this isn't ideal. Sometimes the bottom seems to drop out of matches entirely, a perfect match suddenly becoming a lag sensation in the final minute or two of its runtime.

Lobbies and the like can help to remedy some of the issues with matchmaking, but even that is far from a seamless experience. The Battle Arena is a solid idea, meanwhile, but there are some bizarre decisions even there, like one match taking place at a time and changing characters booting you right to the back of the queue to play.

It is all frankly far less than ideal - and that's a shame, as the current state of online in Super Smash Bros. Ultimate is a blight on an otherwise brilliant game. Here's hoping Nintendo gets it head in the game and sorts it out sooner rather than later.