Skyrim giants have been clubbing players into the stratosphere for almost nine years, so it's about time someone figured out how to return the favour.

A Reddit user called RachelVivienGunn recently shared a video in which they absolutely blasted a giant into orbit. You can check out the video below, which shows somebody finally getting their revenge for giants being the biggest bullies in Skyrim since 2011.

That's not entirely true, though - giants in Skyrim aren't so much bullies as they are protective over their mammoth pals. If you leave them and their mates alone, they'll just wave their sticks above their head and make loud, grunting sounds like hairless Chewbaccas. It's only when you try to nick their treasure or have a go at their mammoths that they send you on a one-way trip to Jupiter.

That doesn't mean a change wasn't needed. You see, the giants know that they can beat people up - even the Dragonborn themselves. Consider the fact that when you first get to Whiterun after leaving Riverwood, it takes a whole group of Companions to take on a giant - and they're literal werewolves!

Thankfully, RachelVivienGunn has done the impossible. They have proven that yes, Skyrim giants can be trebucheted into the cosmos. The most astonishing part is that they shot this giant right between the balls. How on earth was a ball-shot the go-to angle for a space launch? Is that the perfect centre of gravity with the most potential for maintaining momentum on an upwards trajectory instigated by an external force?

Why have none of the famous physicists ever told us about this phenomenon? If they haven't coined anything yet, I'm going to call it the "Law of Cosmic Ball-Shots." I'm going to write to Bethesda and ask them to make it an official Dragonborn Shout - Fus Ro Balls.

But yeah, look at him go! I'd say he's going to be very grumpy when he bangs his head on the moon. 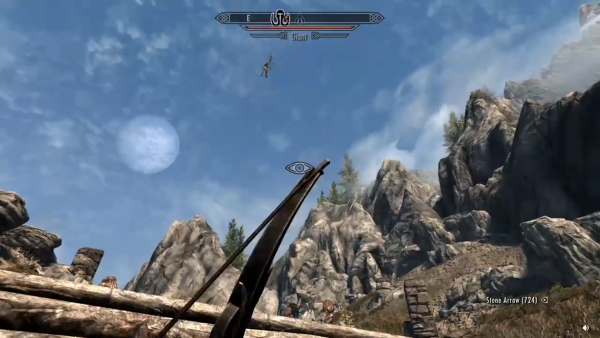 In related news, I have put so many hours into Skyrim and genuinely never knew that you can duel your Companion pals in Jorrvaskr.