Skulls of the Shogun, Special Forces Seal Team X, EA Publisher Sale and more have been dated for the XBL Marketplace. The content bonanza starts today and runs through February 11. get updated below.

Starting today, you can pick up the Revolution DLC pack for Black Ops 2 - the core game is not available through Games on Demand as well - and Street Fighter x Tekken DLC along with Megaman 9 and 10 are the Deal of the Week. Dragon’s Lair for Kinect is also 50% off until February 4.

Need for Speed Most Wanted and Cabela’s Hunting Expeditions are also available though Games on Demand as of today.

Tomorrow, January 30 you can pick up Skulls of the Shogun, and the Radagast character pack for Guardians of Middle Earth.

Special Forces Seal Team X arrives on the service February 6 along with online multiplayer and the Wallace Pack for Scott Pilgrim. You can also pick up the character Gloin for Guardians of Middle Earth.

Starting February 5 and running through February 11, Mini Ninjas Adventures for Kinect will be 50% off.

Below is a list of the games available through the EA Publisher's Sale. Big thanks to Slickdeals for the information. 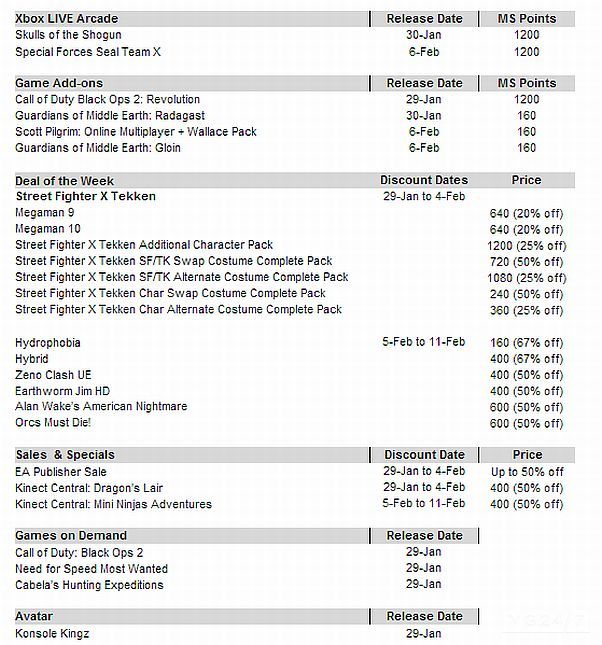