The tight shorts and dual pistols are dead and buried.

It’s just over a month before Lara Croft’s concluding chapter of her origins trilogy is released with Shadow of the Tomb Raider.

As well as getting a hands-on of the first few hours of the game, introducing Lara to the Peruvian jungle and her search for the hidden city of Paititi, I also got to speak to the game’s narrative director Jason Dozois, discussing the journey to making this final part of the story, tailoring challenges to players, and what becoming the Tomb Raider means in our times.

Warning: Interview contains a spoiler for Rise of the Tomb Raider.

VG247: Now that Shadow of the Tomb Raider has gone gold, how has it felt taking the baton from Crystal Dynamics to conclude Lara’s origin story?

Jason Dozois: It’s been a tremendous responsibility. As we’re doing the press tour now, it’s been very rewarding actually seeing people playing and giving a lot of positive feedback. But the relationship between Crystal and Eidos goes back to the founding of the studio, because even Deux Ex: Human Revolution was using Crystal Dynamics technology as the engine. There’s been collaboration on Tomb Raider 2013 and Rise, both in content and technology, so it’s been an ongoing relationship for a long time. My previous game was Deus Ex: Mankind Divided, which was very cerebral, and about choices and consequences. Having the opportunity to work on Tomb Raider is such an exciting change of flavour and change of pace. 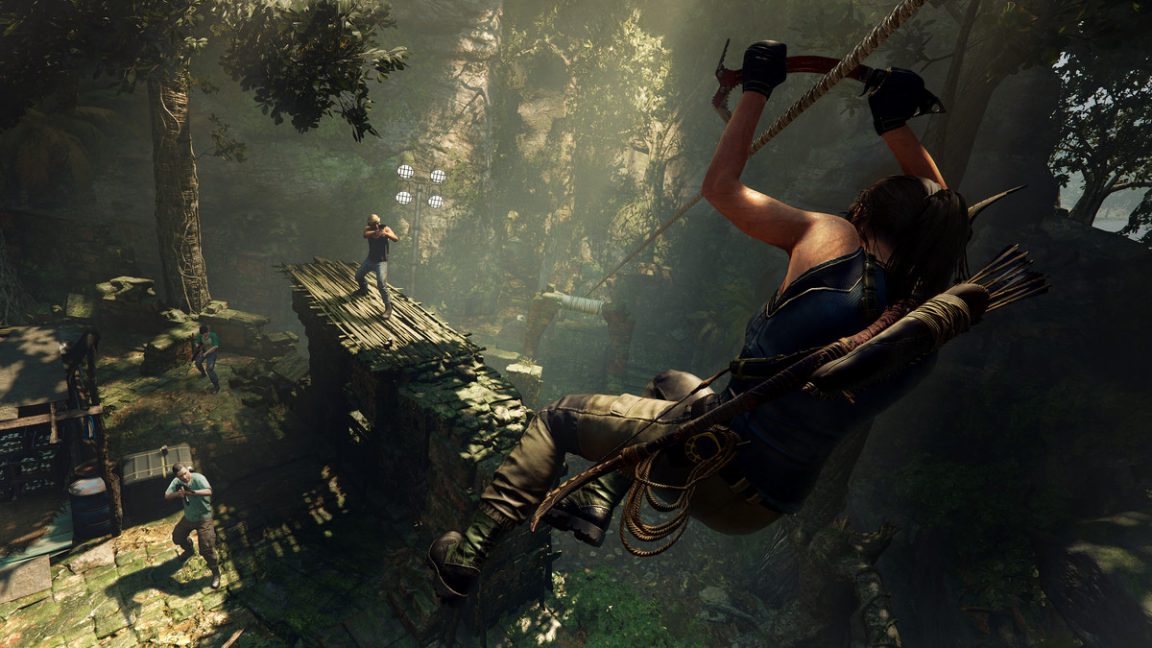 Was there always a trajectory planned for how Lara’s story would progress or iterate or was there room for Eidos to put their own stamp on it?

At the high level, it was conceived as a three-part coming-of-age story, but as you get into execution, every game is solving its own problems and creating its own plot, and we go in there and we have this clear momentum coming from Tomb Raider 2013 to Rise, so we have to answer those questions. The last thing you hear in Rise is Lara’s father was killed. So we can’t just ignore that, we have to find a way to answer that question. But the more low level you get, it’s iteration, trying to make the best story we can make, and balancing the pillars. One of the things I’m very proud of in this game is the balancing and the pacing of all the mechanics. Rise was more action-heavy. Here, we have really interesting pacing, there’s more puzzles on the critical path and there’s more exploration. It’s really about taking that momentum of this character and leading it to a good conclusion.

I found it interesting that at least in these first few hours, there’s been less focus on combat with Trinity than there has been with the natural threats of the jungle. Was that always an important element to include?

The jungle was chosen for many reasons, not only as a visual contrast with the previous game, but the jungle is a reflection of where Lara’s at in her capacities. The jungle is duality - life and death, it’s a place that creates a lot of opportunities and wonders, but also one of the most dangerous places in the world to go to. We wanted a moment where we’re alone in the jungle so that Lara can be transformed by the jungle. That’s why facing the queen of the jungle, the jaguar, is part of that transformation. The jaguar is using the environment, hitting and running, disappearing with stealth, and you don’t know where it is - that fear you’re feeling when you play that, that’s what you’re going to use as a weapon against Trinity later, so it’s important in that moment to really transform the gameplay and use the jungle and fear to evolve to the next level. 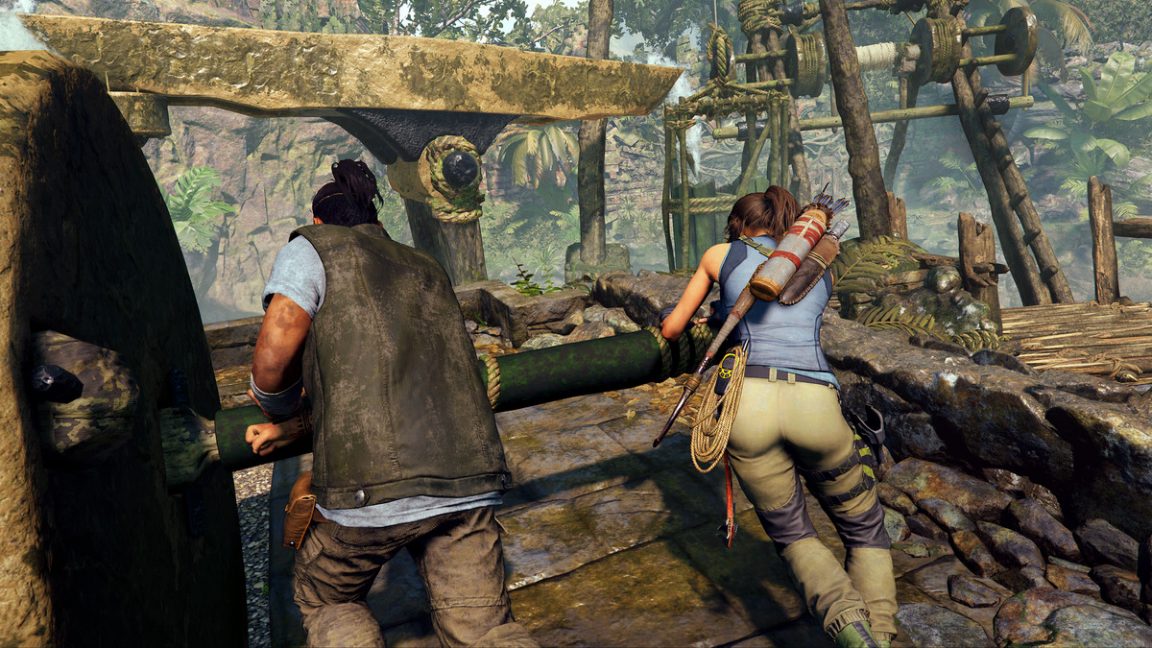 "It’s not a period piece. It’s always set now, so we have to use the sensibilities of today. Becoming the Tomb Raider is becoming this ultimate expression of this survivor timeline, and what that means for us is becoming more responsible with the use of archaeology"

Has it been a challenge catering gameplay to beginners and hardcore players?

It’s even more elaborate than that, I’d say. Because we have three distinct pillars - platforming, puzzles and combat. Some people have more of an affinity to those things, so it’s not just about making it easier or harder for everyone. On the puzzle side, because we wanted puzzles on the critical path, people from the community were saying “We want hard puzzles,” so we started designing more difficult puzzles. But when we were playtesting them, some people were lost, so we started adding hints. But then the fans who wanted to solve the puzzle on their own would get frustrated, “Oh, I had it, and then you gave me the answer!’ On the exploration side, there was an online community called GROWL (Get Rid Of White Ledges) who just didn’t want any traversal hints, so we just decided to spread that out so people can customize it how they wanted.

This is the third part of a trilogy but do you think it will appeal to newcomers?

Looking at the beginning of the game, you have every pillar represented in a kind of compressed way, so this is acting as a kind of exposition and tutorial - here’s the tone of the game, here’s what Tomb Raider is all about before we get into the jungle. It’s a good drop-in point for anyone who’s not played anything: they can start there, have the Tomb Raider experience and move on. It works as a stand-alone game.

Is the story complete then, or are there plans to expand it post-release? 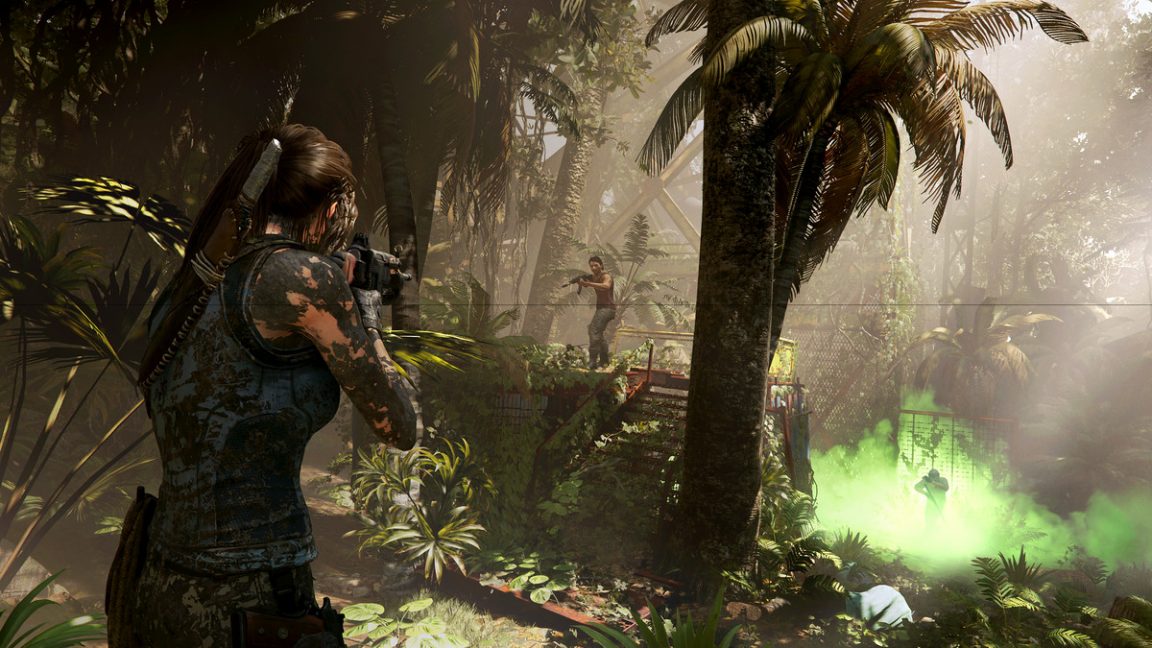 We’ve heard a lot about how this is going to be when Lara becomes the Tomb Raider - but what does that mean to you? Surely we’re not coming full circle to 90s Lara in short shorts and dual-wielding pistols?

We regard Lara as a classic timeless character. It’s not a period piece. It’s always set now, so we have to use the sensibilities of today. The reboot has been about bringing a more grounded version of Lara. Becoming the Tomb Raider is becoming this ultimate expression of this survivor timeline, and what that means for us is becoming more responsible with the use of archaeology, it’s not just about possessing an object, going into a tomb, everything crumbles, and then leaving. It’s about learning that archaeology is also culture, and history, and language, and that involves people. That’s why people are really prevalent - that’s why there are hubs - this is all part of the full archaeological experience. Take for instance the Mayan language - people have been speaking it for over a thousand years but the writing system was lost for a long time. It was only re-deciphered in 1973 - archaeologist, artists and a lot of people from all over the world helped to restore this. Now the Mayans themselves are taking this up and relearning themselves. So part of that is helping to restore culture, and that means it’s something alive. Language, when you speak it, it’s a culture, it’s a living thing, and I think archaeology participating in that process is really good.

Shadow of the Tomb Raider is released on PC, Xbox One and PS4, September 14.