A new update is available for Sea of Thieves and it includes a nice list of fixes, improvements, and a fun new feature.

Rare has released patch 1.0.4 for Sea of Thieves, and it adds legendary ship customization, new sound effects, and a rebind option for push-to-talk.

As far as fixes are concerned, ships should no longer spawn with damage; weapon selection will no longer reset to default after death; rain will no longer appear inside the Legend Hideout Tunnel; and multiple text bugs and NPC dialogue issues were addressed.

Players can expect further improvements and optimizations for all platforms going forward.

Last week Rare announced the first content update for Sea of Thieves, The Hungering Deep, will arrive in early May.

Notes for today's Sea of Thieves patch can be found below. The update is around 1.30 GB for all platforms. 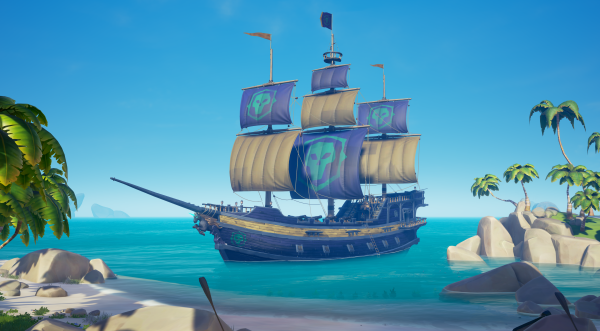 Some players cannot see their downloadable content in game.

Players may experience details of their pirate (such as hair colour / scars) looking different from their initial selection.

Skeleton Fort or Bounty quest skeleton waves sometimes spawn in the ground or cannot be found at all.

[PC] Push to talk option will reset to default (disabled) between sessions.