Sea of Thieves developer Rare has plans to tweak matchmaking, deal with cheating, and evolve the game with new content.

Rare has posted a developer update discussing its plans for Sea of Thieves.

One of the subjects addressed is a change to matchmaking, which would allow players to select whether they want their ship to be open to others or invite-only.

The studio said such a change would allow players to manage how many people they want on their ship, "invite friends and decide whether or not to allow other players to join them."

Rare hopes the feature will keep players from misusing the brig, the most common misuse was folks using the system to hold a slot. This was due to them either wanting to play as a private crew or play with those with mics who speak the same language.

"We hope this mitigates one of the key reasons for people misusing the brig," reads the developer update. "It also has the added benefit of allowing players to sail the galleon with a smaller crew if they desire, or the sloop with a larger crew.

"We've had a lot of feedback and requests for this so we'll be very happy to deliver this functionality."

The team is working on implementing a matchmaking by microphone status, with matchmaking prioritizing matching players via mic status, and the option to filter by language.

Instances of cheating in Sea of Thieves was also addressed in the developer update. This is something Rare considers a high priority situation. The studio said the number of cheaters in the game is rather small, but once a offender have been identified, they will be swiftly banned. 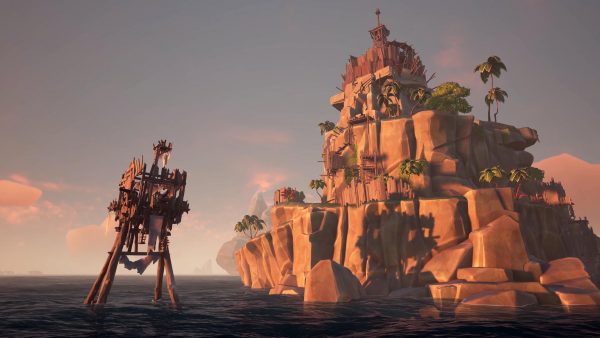 The latest Sea of Thieves patch addressed the ship respawn distance so folks would be out view of the ship that sunk them. The team plans to adjust this further in the live services, instead of the client, based on player feedback.

"Our plan is to measure whether this makes a significant difference," reads the post. "Are people using the Scuttle option more, is it a solution that works for the majority of scenarios? We'll assess this before taking further steps."

Another option under consideration is moving ships to other world instances should players become caught in a griefing situation.

Finally, Rare touched upon future content for the game. The team is currently adjusting its roadmap based on feedback, and plans to release a video next week discussing how the studio plans to "evolve Sea of Thieves moving forward."