Meaningless and imbecilic, Saints Row: The Third is a benchmark in sociopathy and one of the year's most essential games. Patrick Garratt's drunk on anonymity.

Saints Row: The Third is the true epoch of the violence end-game, a beachhead for a new wave of nugatory murder simulation that smooths the plaster against which narration repeatedly sandpapers its face.

I'm fucking unbeatable. I don't need to listen when Saints Row talks to me. I know the Morning Stars are a gang of clones in suits and stockings, and that I go to parties full of women wearing g-strings. Doesn't mean much. I'm an old black man with a smashed-in face. There's all this shit on my phone I could do, but I don't. I buy extra health on occasion, but it doesn't make much difference. At least, I don't die very often. Would I be dying more if I didn't buy some upgrade to whatever? No idea. I pick a mission and follow the arrows. When I get bored I murder some people.

I like not caring. Saints Row: The Third is, thankfully, GTA Lite. Grand Theft Auto IV is, without question, one of the most boring games I've ever played. You can throw me in the fucking sea for saying it, Rockstar: facts are facts. It's a po-faced tedium simulator, as epic in its vision and achievement as it is in its aversion to entertainment. Three-point turns; paying tolls; sending emails; going fucking bowling: lost on me. I don't want to live someone else's life. I have emails of my own.

There's this bit in Saints Row, right, where there's a fucking tiger in the car and some clown wants you to conquer fear. I don't know what the point of any of it was. I didn't read the instructions at the start of the mission because I didn't even see them. And I'm ramming around this city in some fucking Rolls Royce, or whatever, with this tiger hitting me on the head, and there are two gauges in the top left of the screen and I have no idea what either of them mean. If I drive around and smash into stuff, my courage goes up. If I hang around and get mauled by the tiger, his rage becomes more intense. I so want to be brave, so I crash a lot and the top meter goes up and the game shouts, through my television, as loud as it can, "I'm fucking unbeatable."

GTA IV put me off open-world crime games so strongly I nearly didn't play Saints Row: The Third. I started the 360 version after I finished Uncharted 3 because I've got Skyrim on PC and I wanted something to play in my living room. At first I hated it. Just looked like some rough-assed GTA cash-in. But I went on with it, got into the character customisation, and made my injured man.

A few missions in I parachuted into a penthouse gun battle to Kanye and shotgunned people in the face. Amazing and pointless. I'm shooting friends, windows, enemies, breaking necks and jumping up and down and I'm not dying because I'm fucking unbeatable. I'm only four hours into it, about a third of the way through the campaign, but the blend of uncomplicated idiocy and open access to a suite of ADHD toys easily prised me away from Skyrim's "depth". I don't have to concentrate in Saints Row beyond picking up some hookers and molotoving a tramp. I'm not anyone. I'm some insane prick with a bloody face driving a flaming ATV. I'm king of a world so repugnant it's irrelevant. 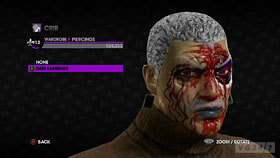 Who's this? Why does it matter?

Saints Row: The Third is the true epoch of the violence end-game, a beachhead for a new wave of nugatory murder simulation that smooths the plaster against which narration repeatedly sandpapers its face.

It has me by the balls. Why sense? Game of my year.