You may know Rust as the MMO survival game where everyone is stark naked the vast majority of the time. You may also have heard by now that the game's January 2021 update introduced Twitch Drops into the game, including collaborations with a number of major streamers which reward you for watching their channels.

Following the success of last month's event, a second series of Twitch Drops have been made available in Rust. All you'll need in order to claim some exclusive in-game items are a Twitch account and a Steam account. There's one catch though: these Twitch Drops are only available until Thursday 11th February 2021 at 7:00pm UTC. (That's UK time, so 2:00pm Eastern Time or 11:00am Pacific Time.)

After that they'll be gone — forever, as far as we know — so act fast if you're looking to claim some exclusive Rust loot in collaboration with streamers including kvetchingkrist, MisterFlak, and more!

Oh, and this time around the Drops include a pair of trousers you get after watching just two hours of streams, so your Rust character can finally cover up. (That is, if they want to.)

You can earn up to 12 new items as part of the Rust Drops on Twitch OG Edition promotional event. Three are Twitch drops which you can earn from watching any participating streams, while the other nine are linked to specific streamers' channels.

As in last month's event, there are Twitch Drops that you can earn by watching any participating Rust stream. However, things are just slightly different this time around.

Streamers kvetchingkrist and MisterFlak have collaborated on the designs, but instead of asking you to watch their channels, they're signal boosting some of their favourite smaller streamers who'll be part of the event. There's a video at the top of kvetchingkrist's channel name-checking the people they'd particularly like to recommend.

Watching any streams as part of the event for a total of two hours will net you the Pookie Pants, while you can watch for a total of four hours to earn yourself a Pookie Hoodie. These are reskins of the pants and hoodie items designed with kvetchingkrist.

Finally, watch a total of six hours of streams as part of the event and you can claim Mister Flak's Hammer. This reskin of the hammer item has a cool Mjolnir vibe to it and the letters "MF" stamped in purple right across it, presumably to give other players a hint of what to start yelling when you approach them while wielding it.

Nine more Twitch streamers are collaborating with the makers of Rust for this event, and each one has a reskin designed around their particular aesthetic for an item in the game.

Watch a participating channel's Rust streams for a total of two hours or more during the event to earn the following:

In order to earn Twitch Drops in Rust, you need to watch participating Twitch streams between now and when the event ends on February 11th at 7:00pm UTC/2:00pm ET/11:00am PT.

Participating streams include any Rust streams on the eleven channels listed above and the ones recommended in kvetchingkrist's video, as well as any other Rust stream that includes the Drops Enabled tag.

Please note that you will only be eligible to receive a drop for one active channel at a time. Keeping multiple muted streams running in the background won't do anything for your progress, I'm afraid.

To claim your Drops, simply go to twitch.facepunch.com and be sure to sign in with both your Twitch account and your Steam account. To make linking all your accounts as painless as possible, there's a couple of friendly buttons right there on the page that will do most of the work for you. 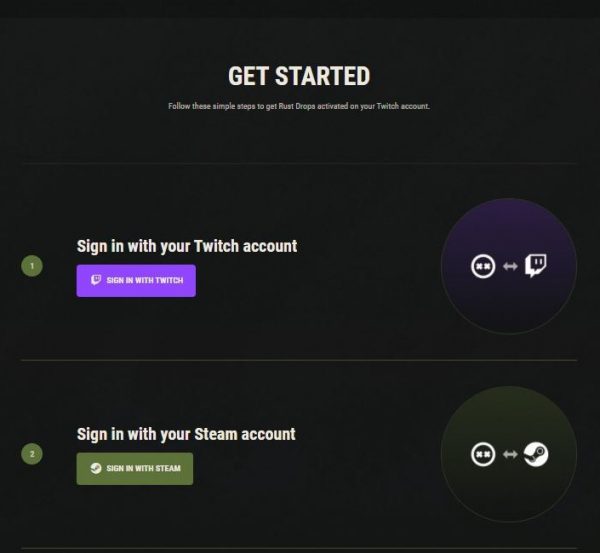 Once that's done, you can activate Twitch Drops for your Steam account by pressing the big green button that should have appeared. Then just start watching. It's really that easy.

For full details on your eligibility to claim Twitch Drops for Rust, see the FAQ section at twitch.facepunch.com. Basically, though, as long as you log in to Twitch and Steam before watching you'll be fine — you don't even need to own a copy of Rust to get started, as claimed Twitch Drops can be added to your Steam inventory later on.

While this is the second month in a row that Rust has offered a week of Twitch Drops, there's no official word yet on whether more of these events will take place after this one ends on February 11th, so act quickly if you want to participate!

What has been available in past Rust Drops on Twitch events?

This is the second time in as many months that we've seen a Rust Drops on Twitch event, suggesting that they might be in the way of becoming a regular thing.

Sadly, at the time of writing there's nothing to indicate that you'll get another chance to earn items from past events that you may have missed. However, if you just like double-checking that you did manage to complete the set — or, more likely, annoying yourself by browsing through what you could have won — here are the items from previous Rust Drops on Twitch:

Watching any streams as part of the January event for a total of two hours would net you a nice new sofa. Four hours would earn you an industrial door reskin for the sheet metal door item; and after eight hours you'd get a hobo barrel. You'd also have received blueprints for the sofa and hobo barrel, allowing you to craft them again in future.

The nine collaborating streamers and their branded items for the month were as follows:

In the meantime, if you're keen for more on Rust, check out our guide on how to repair and upgrade modular vehicles in the game.