Here's one for the "highly dubious" and "probable Photoshop fakes" piles: Assassin's Creed's Ezio Auditore has apparently been spotted in Soul Calibur V.

Joystiq received the image below from an anonymous tip, and was told the snapshot was taken of the beta version at a fighting game tournament.

Gematsu reports the image was grabbed from PS3blog, where it appeared as part of a now-inaccessible liveblog of a Namco Bandai event where a guest character was apparently set to be revealed.

The site is said to have reported "no further information can be released about this game due to the embargo", and that the game had been given a firm release date of January 31 2012.

Do we need to point out the unlikelihood of this happening at a public event and only one leak mentioning it? Or the strange graphical discrepancies in the image? Or the sheer bizarrity of an Ubisoft-owned character signing on with a Namco Bandai-published game?

I will be utterly flummoxed if this turns out to be true. Soul Calibur V is due on PlayStation 3 and Xbox 360 in March next year. The next Assassin's Creed title, Revelations, is due in November. These facts remain unrelated. 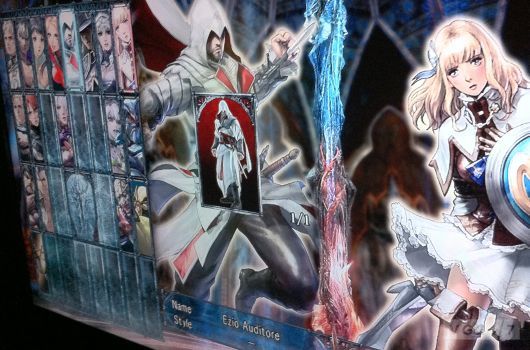