Dan Teasdale made Destroy All Humans!, Rock Band and The Gunstringer; if that weren't reason enough to pay attention to his new game, the fact that it stars a spinning limo and was inspired by Tony Hawk and Crazy Taxi seems sufficient.

Dan Teasdale is a champ. 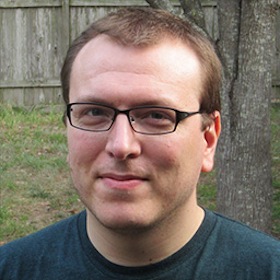 As a designer, Dan Teasdale's major credits are Destroy All Humans! (Pandemic), Rock Band (Harmonix) and The Gunstringer (Twisted Pixel), but he also worked on Army Men and the first BioShock.

He broke away from Twisted Pixel to found his own team, No Goblin. He's CEO and creative director.

At No Goblin, Teasdale works with Panzer, a designer and artist whose work has appeared in triple-A games but who prefers to use an alias.

When Roundabout was announced a few weeks ago with a trailer, the gaming press looked at it, loved it, and pressed it gently to its collective bosom. A spinning limo is precisely the kind of thing you need on a Thursday afternoon when you're feeling a little underwhelmed with the string of piecemeal next-gen news and leaked shooters.

With its personality, humour and colour, it's a game that screams "Dan Teasdale", whose past credits are packed with all three. It's unsurprising that his next project should be so cheerful and different. Even so, a spinning limo?

"Roundabout's actually a bunch of smaller ideas all meeting together at once. I've had a designer crush on Tony Hawk's scoring system and world construction for a while, and wanted to find a way to build another game that invokes that same feeling of discovery and increasing risk/reward," Teasdale told us in an email.

"I've also missed the approachability of games like Crazy Taxi, where even after finishing it you could pick it up and blast around for short bursts and have loads of fun. We were messing around with a couple of prototypes that touched on those aspects, but the Roundabout prototype was the one that really stuck with us and seemed the most promising for our first game."

Although No Goblin's debut project is sure to make it stand out from the crowd, it does have at least one precursor for those who prefer their a little familiarity before committing; Teasdale says Roundabout can be likened to Kuru Kuru Kururin, a Game Boy Advance launch title in Japan and PAL territories "about a bird that piloted a weird rotating stick helicopter through a bunch of electric neon levels".

"I absolutely loved that mechanic, but at the same time was super sad that nobody was trying to figure out how to take that to the next level. Even the Kururin sequels were really weird - instead of spinning, they focused on attaching a gun to this weird bird ship and you'd shoot huge worms, which completely defeats the purpose of a spinning ship," he said.

"Roundabout takes that basic 'rotating' mechanic then blows that completely out. Instead of levels, we have a full open world, we have a narrative and side missions, unlockable paths and upgrades, collectables, the works. While the hook is still 'long spinning thing', Roundabout's similarities with Kururin pretty much end there."

For one thing, there's no bird; Roundabout stars one Georgio Manos, and it's set in 1977. I queried whether this choice of temporal setting was because 1977 was, clearly, the best year), and received a resounding affirmative answer.

"The '70s are also a pretty unexplored time for games. Even the few games that are set in the '70s seem to be more deriving their mood from Shaft, which is cool, but not everything the '70s had to offer. If I had to sum it up, we're more of a Paul Feig or John Hughes take on 1977 rather than Isaac Hayes' 1977.

"We actually had a bit of an argument about whether to set the game in 1977 or 1979, but we very quickly realised that the only reason we wanted 1979 was so we could license Gary Numan's Cars."

This is the sort of informed, rapid-fire decision making that is only possible with a small, agile indie team. No Goblin is backed by private investors as well as its founders' savings, but the pair are working out a basement ("a large finished basement, and it has a nice fireplace, so really it's like luxury indie mode") and "bulk buying everything at Costco", so Teasdale doesn't feel too much like a "fake indie" as he explores newfound creative liberty to do whatever he wants. Such as pose topless.

"I think the biggest thing that would have been trickier for us to do at another employer is the Men of Game Development calendar (buy now at menofgamedev.com!). If you'd told me that the biggest thing I'd do in 2013 was release a calendar full of half naked colleagues, I'd probably start re-evaluating my life right then," Teasdale mused.

"At PAX Prime, I was pulled over about a half-dozen times to sign calendars or get requests for more topless men. I'm beginning to get worried that No Goblin may turn into a calendar making company that makes video games on the side."

"There's already a huge amount of talent making shooters way better than I ever could. The real reason though is that I'm terrible at online competitive shooters, and making a shooter would mean that I would be one of the worst people playing a game I worked on," the designer said.

"So, yeah, you're stuck with me making rotating limousines and such for a while. Sorry."

Roundabout is coming to PC and as yet unannounced consoles next year. It will cost $15 at launch, but you can pre-order now for $10.