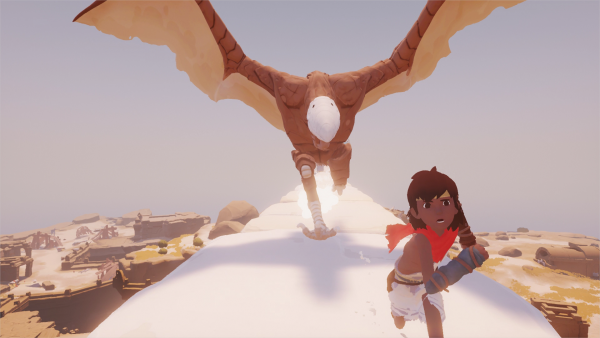 Earlier this week, lead producer Cody Bradley released a statement on the official forums promising Denuvo would be removed from Rime in the event of a crack.

That occurred yesterday, and the studio has made good on its promise (thanks, PC Gamer).

"Today, we got word that there was a crack which would bypass Denuvo," said community manager Tim Slager in an update on the site. "Upon receiving this news, we worked to test this and verify that it was, in fact, the case. We have now confirmed that it is.

"As such, we at Team Grey Box will be replacing the current build of Rime with one that does not contain Denuvo. Please make sure your PC version of Rime has been updated, if it has not done so automatically."

Have you hit a snag in Rime? Here's some tips and tricks to help you get started. We also have a guided walkthrough for the beach, beacons and your fix buddy.

The anti-tamper technology and digital rights management tech was blamed by many PC users for performance issues. Grey Box did not feel this was the cause, but investigated it anyway. While in the process, Denuvo was cracked by "Baldman" who claimed the game ran much smoother after removing the tech.

Baldman said Rime makes 300,000 calls during its initial launch and loading of saves to verify legitimacy of the game. This means the DRM called "10-30 triggers every second during actual gameplay, slowing [the] game down."

"After 30 minutes of gameplay, it became 2 million triggers. In games like Sniper: Ghost Warrior 3, Nier, and Prey there were only about 1-2 triggers called every several minutes during gameplay. Triggers under VM are heavily obfuscated, which obviously does not improve performance."

Those who applied the crack verified the game seems to run much better.

Grey Box said it was aware Denuvo is "a very sensitive topic for gamers, and it didn't make the decision to add the tech lightly.

"The fact of the matter is that we looked at the piracy rate on games that were very similar to Rime, and it scared us," said Bradley. "At the end of the day, our obligation as a publisher is to protect our development team’s intellectual property to the best of our ability. Right now, Denuvo is our only effective option.

"The only thing that Denuvo is currently doing for us is checking to make certain that Steam’s (or Origin’s) DRM is still attached to the game. There is a small performance hit associated with this, but at this time we do not believe it is causing the problems that are currently being reported.

"It has always been our intention to remove Denuvo in the event of a crack. Based on other titles, we expect the protection to last two weeks, maybe three at most. We have no intentions of patching a new version of Denuvo in at that time."

Bradley went on to say the team is working on its "first traditional patch," which it expects to release next week.

The patch will fix the VR initialization bug along with specific instances of hardware-related crashes. Other updates include in the patch will be announced when it is release.

Rime was released on May 26 and reviews for the game were rather positive, despite a few outliers.

Along with being available for PC, Rime was also released on PlayStation 4 and Xbox One.