The supersized item box of goodies includes a poster, artbook, Steelbook case and Chris Redfield figurine. Plus, you’ll get a handful of digital extras, from the Trauma Pack. This includes the "Village of Shadows" max difficulty option, exclusive Safe Room Music, a Mr Everywhere weapon charm, a Resident Evil 7 tape recorder save point, the Albert01 gun, a Found Footage RE7 filter, and ‘The Tragedy of Ethan Winters’ artbook.

If that all sounds like your sort of thing and then here’s where can pre-order Resident Evil Village Collector’s Edition. Currently, it looks like it's a GameStop exclusive in the US and a Game exclusive in the UK. 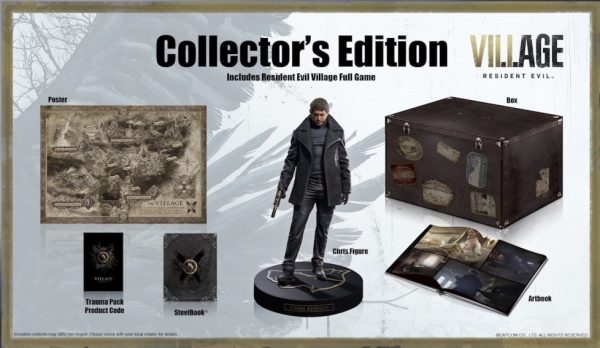 Of course, for those who don’t want to fork over quite as much cash but still want a little bit extra, you can pick up the Resident Evil Village Digital Deluxe Edition instead. This version of the game just includes the digital goodies listed in the Collector’s Edition above.

Next to that is the Complete Bundle – which includes a copy of Resident Evil 7 – or just the Standard Edition of the game.

Think you'll take the plunge already, or will you hold off until the Resident Evil Village demo is released later this year? It's set to be more substantial than the PS5-exclusive demo available right now.

Resident Evil Village is scheduled for release on 7th May 2021 across PS5, Xbox Series, PC, PS4 and Xbox One. You can find more info about the game itself in our breakdown of the Resident Evil Showcase, as well as the newly-announced Resident Evil Re: Verse multiplayer mode.