Welcome to the family, son. 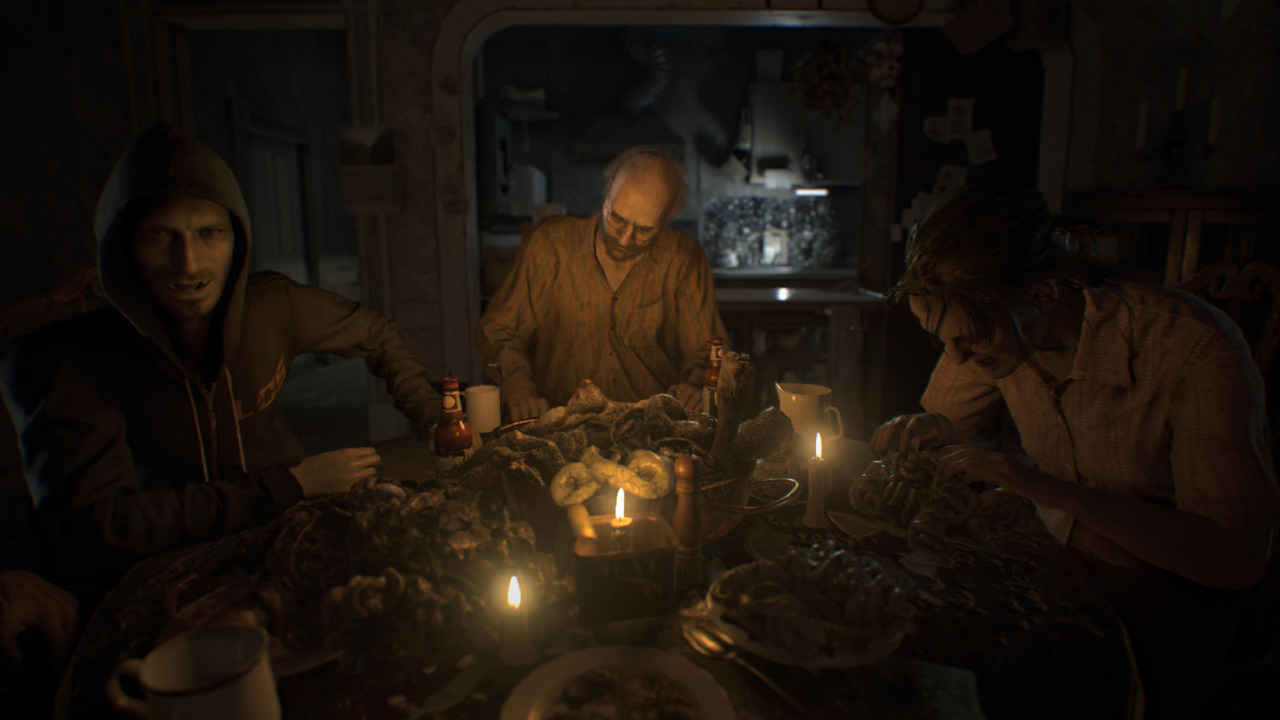 After some scenes, you open with the dinner table scene that's been shown a lot in pre-release footage. Eventually you'll regain full control of Ethan.

Explore - don't worry about granny, no matter how creepy she looks. There are some notes around to read in the dining room and the living room. In the kitchen part of the dining room there's a herb (used to restore health or craft medkits) in the bin. Inside the room next to the kitchen area is a boot you can examine - it has a name on it. A victim? A family member?

Inside the same room as the boot is a locked trap door. This trap door is important so keep it in mind for later.

Once you leave the dining room you end up in a long hallway that wraps around those rooms. You'll notice stuff - locked cupboards, a box the game says is breakable, etc - ignore this for now. At one far end of the hallway is Jack, and on top of a dresser at the far end of that hallway are the keys to that trap door. You need them.

What follows is a messed-up game of hide and seek, and this area is so small that really there's little I can do to advise. When Jack spots you, turn and run, and try to use the layout of the area (consult your map) to loop around in circles and lose him. At the far end of the hallway before it turns to the right there's a key on a table - this is for the trap door. You need to find a way to grab this and loop back around to the trap door without Jack killing you. He will certainly try to kill you.

Once you get the keys, head to the trap door, open it, and head through it. On a the left side of this underground area is a red lawnmower type vehicle, and on top of it is an antique coin - important items you use to buy upgrades.

At the end of the path you'll end up in a safe room. And breathe! In here: An item locker (these are magical, so anything put in here will be available at any locker), a save point, a phone. Plus some items to grab:

The phone will ring when you go to the door. Answer it. Story intrigue abound! 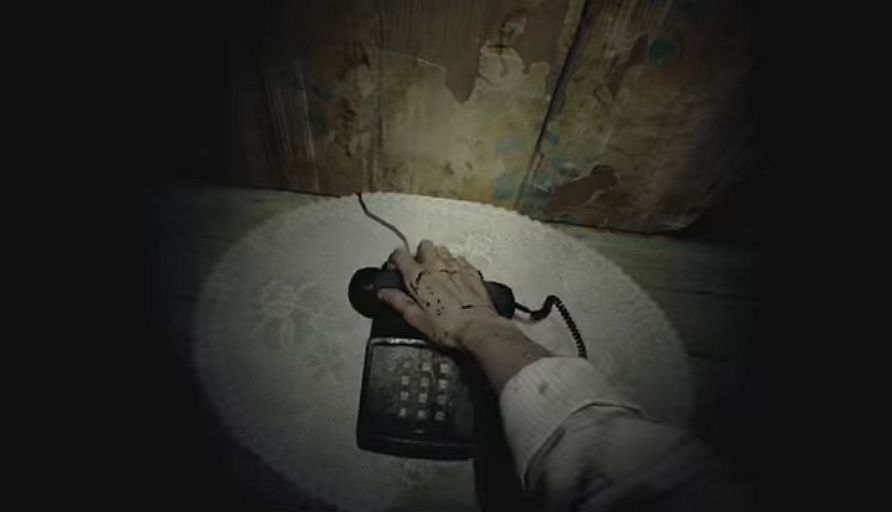 After leaving that room, head around to where the main hall door is on the map. Jack appears to be gone. He's stormed off. You won't be able to get into the main hall, however. You need a key. Double back on yourself, and... a cop! Thank god! And he gives you a knife. Saved! (Surely?!)

On your left from where the window where the cop appeared is you'll find a locked cabinet. If you want you can use your one-time-use lockpick to open this - there's a medkit inside, and there'll be more lockpicks and locks to pick later.

Before you proceed, backtrack on yourself again to where the main hall door is. Just beyond this door is a dead-end, but among the stuff here is a bobblehead type figurine. Slash it with your knife to destroy it. This is a Mr. Everywhere, a collectible - and across the course of Resi 7 you want to try to smash them all.

You can now use your knife knife to open the door to the garage down the stairs back near where the cop appeared. Slife the tape and hit the hidden button. On your way, you can also break the box that's wrapped in yellow tape with the knife for some ammo. Do that first, then head into the garage.

Boss fight: Jack in the garage

Okay, so, there's a nice easy strategy for this. Be quick: To your right as soon as you gain control there's a bench with the car keys on it. Grab the keys, hop into the car, start the ignition. When that's done, ram Jack repeatedly. Don't give him a chance to even get his bearings.

If you fail to get into the car quickly enough, Jack will instead hop in. if this happens, dodge him until he crashes.

Whatever happens, the car burns. When it does, you'll find a gun on the back seat of the car. Grab it and be ready! Shoot, then once things quiet down, look around the room. Item looting time:

When you've grabbed those, head up the ladder which has dropped down in front of where you picked up the car keys. When you get to the top of the ladder, look on your immediate left for some shotgun shells. No shotgun yet, but hey.

Opening the door to the Main Hall with an Ox Statuette

A photo frame is on a frame blocking your path. Pick it up, flip it over, and open it up from the back. This will let to take the OX STATUETTE, which is what you need to open the door earlier.

With that grabbed, push the frame aside and head back into the house proper. The drop won't kill you, so don't worry about that.

Head back to the doors to the main hall, place the Ox Statuette into the door, and watch it open. How very Spencer Mansion. If you didn't smash that Mr. Everywhere to the right of this door earlier, do it now. Head on through the doors.

That concludes part two, but now it's on to part three... We're out of the first part of the house, but there's a lot more to see besides. Steel yourself.