If you followed Part 3 of our Resident Evil 2 Remake S Rank guide, you should now be stood in the Jail with the Parking Garage Keycard in your inventory.

This next bit can be a pain if you don’t act fast.

You want to run straight on, ignoring the opening jail cells. As you can see, the way to your right is filled with zombies. You can either pull the lever to your left and try run around the other side to escape, or you can toss a grenade into the crowd and try sprint through, but watch out for Mr. X.

Once you make it out, a cutscene will trigger and you’ll then be free to use the keycard to escape. Run straight to Kendo Gun Shop and wait for Ada to open the door. Once inside, run to the left and grab the Shotgun Long Barrel, then combine it with your shotty. There’s also a grenade on the shelves next to it and some handgun ammo around the other side. 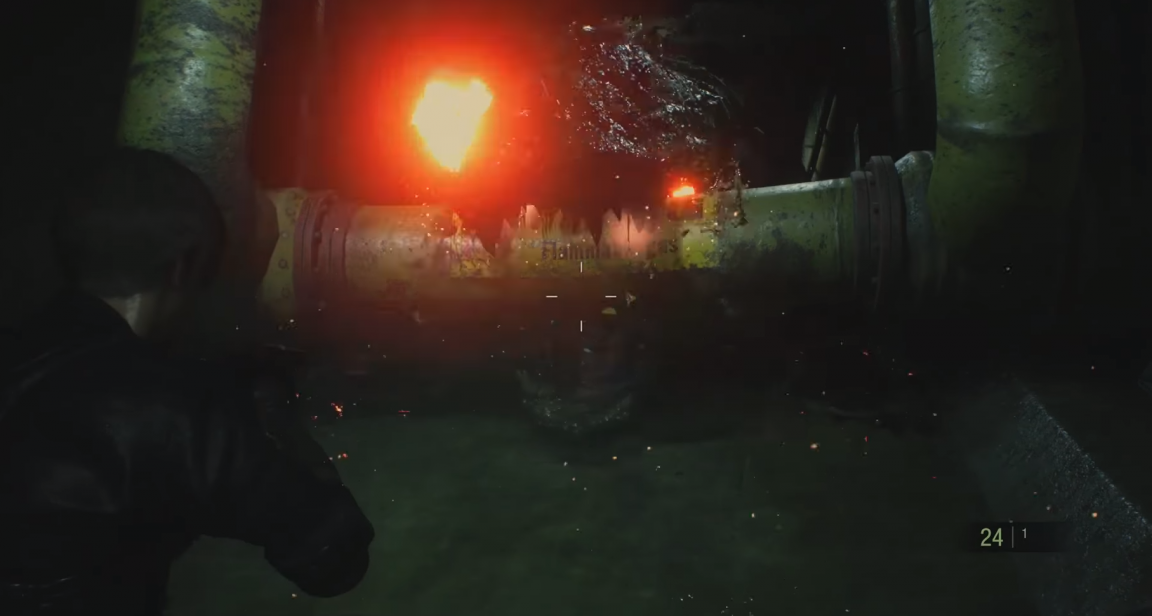 Head to your right and through the alley, then climb down the scaffolding on your right to head into the sewers. Keep following the sewer around and you’ll get a glimpse of the big bad reptile, as well as an opportunity to save your game.

Head through the steel door, follow the path around, then head down the stairs. Keep following the walkway along and eventually you’ll come to a point where you need to drop down. Now it’s time to run from that alligator.

It’s pretty straightforward. Run towards the screen, hugging the left. After he chomps the right side, run to the right. The alligator will then chomp the left side, and you need to run to the left after. Now keep running towards the screen and Leon will jump over some piping and the beast will bite down on a gas pipe. Fire at the pipe and bask in glorious reptile entrails.

Grab the grenade from nearby, then wait for Ada to lower a ladder for you to climb up. Now continue on the only way you can. Enter the elevator and wait for Ada. Go through the next two rooms to trigger a cutscene and switch control to Ada. 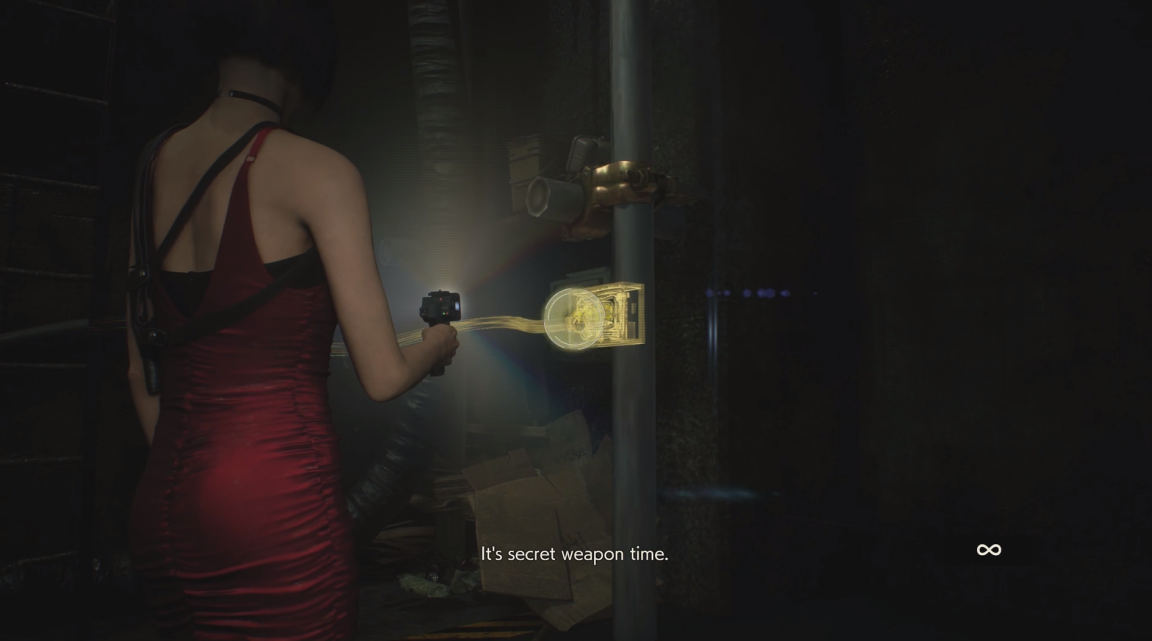 Head to the ladder as Ada and the game will show you a new gadget, the EMF Visualizer. To the right of the ladder is a power box you can only see by aiming the gadget. Aim at it, then hold the fire trigger to power it up. Now aim at the fan and overload that until it breaks. Next, climb the ladder and follow the tunnel to the end. Down and on your right is another power box - power that up and then overload the fan in front of you.

When you drop down, turn around and look to the right of the fan you dropped from - there’s a reroute box to power the cable to the door on the other side of the room. Power that up and leave the room. Head straight along the walkway to get some Handgun Ammo, then head down the stairs.

Go left, then right, then right again past the powered down elevator. Kill the zombie ahead, then head straight on, staying on the left of the shipping container. Stick to the left and go straight on - a zombie will fall near you, but ignore it and head to the railings in front. Pull out your EMF Visualizer and aim it straight ahead at the power box there. Now leg it back the way you came and to that elevator, pressing the button to ride it up. 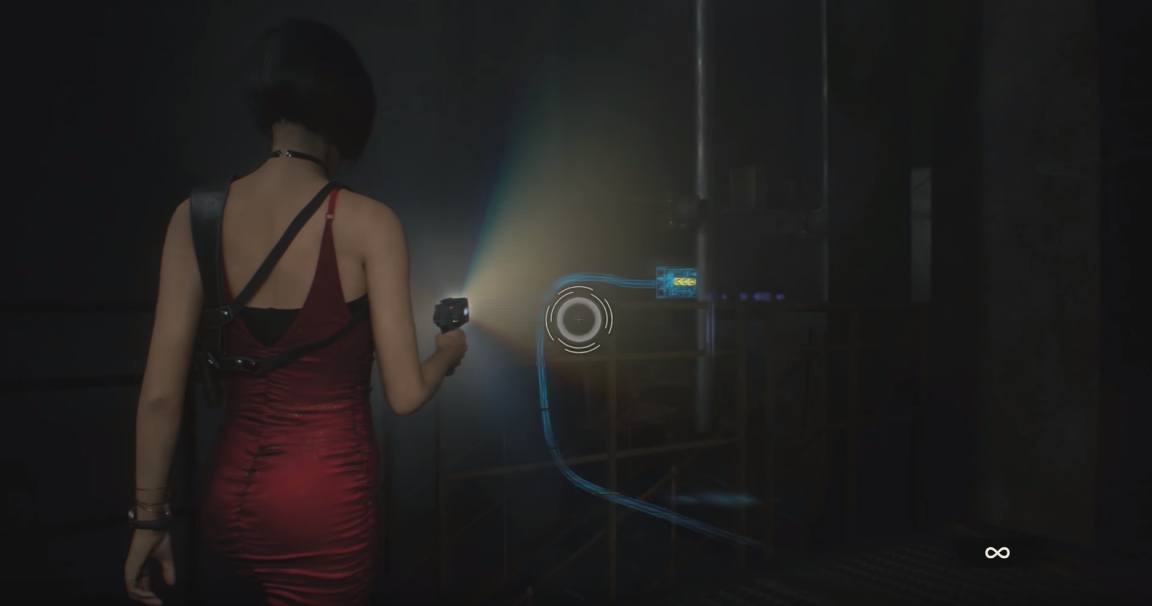 Follow the walkway and head through the door, then follow the corridor around until you reach a blast door. Aim to the right of the door to power it up, then pull the switch - do it quickly before MR. X reaches you. Once you’re in the room ahead, turn around and power up the reroute box that’s next to the blast door. Now you need to overload the fan in the room. Keep the boxes between you and Mr. X as you do it. As soon as it’s done, run to the fan and interact to jump through. You’re safe for now.

You’re now in the Incinerator Room. You have to head up the stairs and open the incinerator. Then head down and enter, grabbing the ID Wristband from the corpse. This triggers a cutscene. Once Annette Birkin has done blabbing, you have to get yourself out of the incinerator before you burn to death.

The first thing you need to do is power up the generator behind you in the left bottom corner (right of the body if you’re looking in). Now you can power one of the boxes above the exit. Now hit the reroute box on your left in the middle of the incinerator. You can now power up another box above the exit. Next, there’s another reroute box on your right in the middle - power that up and you’ll be able to power up the last box above the door, letting you escape.

Leave the incinerator, head to your right, and go through the security door. Now go left, through the other door, then follow the walkway around until you trigger a cutscene.

In Part 5 of our Resident Evil 2 Remake S Rank walkthrough, we take Leon through the sewers and complete the chess puzzle.