Don't play Pokemon Go on the job, because you may get busted by a US official. 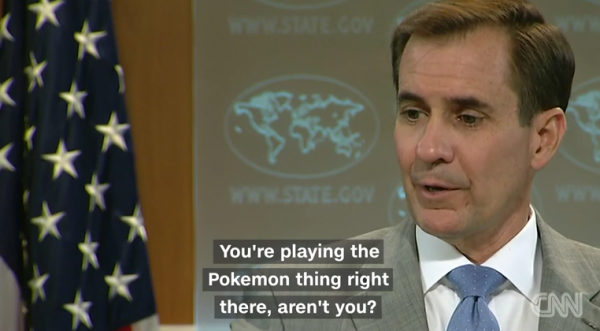 An unnamed reporter who was attending a briefing at the United States State Department, was called out for playing Pokemon Go during the briefing.

US State Department spokesman John Kirby, who was talking about the anti-ISIS coalition's efforts against the terrorist group, noticed the reporter playing the game, and told him, "You're playing the Pokemon thing right there, aren't you," reports CNN.

"I'm just keeping an eye on it," replied the reporter. Kirby later asked him if he managed to catch one. The answer was no, "because the signal isn't very good." Kirby even responded saying, "I'm sorry about that."

Take a look at the incident in the video below:

If your job doesn't involve you attending press briefings at US government buildings, our Pokemon Go guide will help you get more out of the game.