Note: this article contains spoilers for one stranger mission in Red Dead Redemption 2. If you’ve been thorough and you’re up to Chapter 4 or so, you’ve probably done this one. If not, it’s a minor moment of the game to have spoiled but use your discretion as you see fit.

If you’ve finished at least the first half of Red Dead Redemption 2 and talked to other people who have played it as well, Jeremiah Compson is likely to have come up. You might not remember his name – there’s a chance you never encountered him, or have let his stranger mission pass – but the question is always the same: did you kill the old slave trader?

Compson’s mission, The Iniquities of History, is triggered when Arthur finds the old man on a bench outside Rhodes Station. Compson tells Arthur that his life has collapsed; the bank has repossessed his home, he has nowhere to go, he feels disrespected. He longs for his three most treasured items, which were all left behind in his old house – a ledger, a revolver, and a pocket watch. Naturally, boy scout Arthur takes pity and offers to go and get them for him.

The mission goes smoothly by Red Dead standards, which is to say that you only end up needing to kill two people (bandits looking to loot the house). You find the old pocket watch, which has probably held a lot of its value; you find the revolver, which is clearly not in working condition. And then, after you kill the bandits, you find a trap door leading into Compson’s basement. 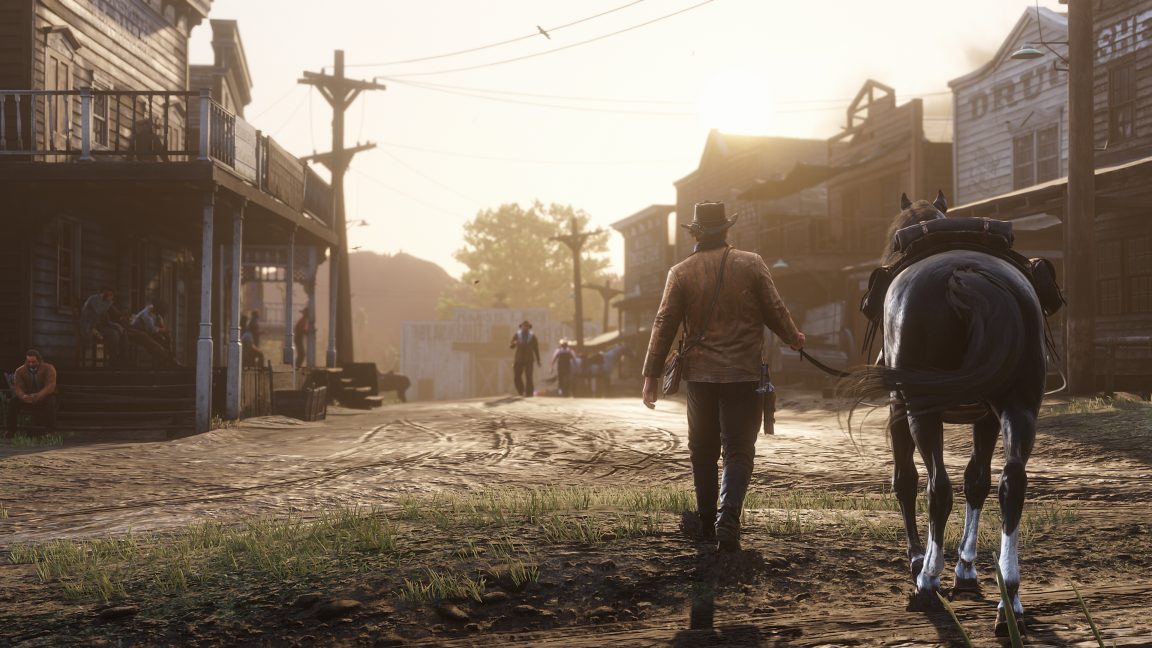 There are chains on the wall down there that look like they’re designed to hold human beings. When you find the ledger, it contains a list: 'negroes recovered in 1856'. Names. Dates. Prices. Slavery wasn’t officially declared illegal until 1865 – until then, Compson was a proud slaver. Now, over thirty years later, he’s homeless, angry, believing that his legacy has been "pissed on". When you return with these items, he’s drunk and belligerent. "I want my job, my pride, the respect afforded to a gentleman," he tells Arthur. Arthur throws his ledger in the fire and voices his disgust: "old man, some jobs ain’t worth savin’". A furious Compson turns his revolver on Arthur, but it no longer works. "I still exist," he moans, and starts weeping over his camp fire.

What follows is one of the game’s more curious, restrained moments. The mission ends. Compson is still sat by his fire, bawling. The game doesn’t prompt you to kill or spare this man, but the implication is obvious – do you put down this awful man, or let him live with his misery?

I’ve talked to a lot of people about how they played this out, and none of them just walked away without thinking about it. A few said that having to keep living was a punishment worse than death for this man. Others shot him immediately and watched as his body collapsed into the campfire, setting alight. And then quite a few people did what I did – started to walk away, content to let him suffer, before deciding that no, screw that, there is always room for truly terrible people like Compson to stage a comeback, to attach themselves to whatever awful rhetoric finds its way into the discourse and to dedicate themselves to a new horrible cause. I shot an arrow into his head so as to not waste the bullet.

Curiously, killing Compson awards the player with additional ‘honour’, tipping the morality scale to the right. Killing this man, the game asserts, was the right thing to do. If there’s another example of this in the game, I’m yet to find it. If you find a Ku Klux Klan gathering in the game and murder them all – I haven’t had the pleasure, unfortunately – your honor rating won’t drop, but it also doesn’t rise.

There are other instances where the game can increase your honor for murder, but only if it’s in service of helping someone out in the wild. This is, as far as I can tell, the only instance in the game where you’re given honour for shooting an unarmed man. There’s a degree of wish fulfillment here, of course – being able to erase someone awful in an instant, to put an end to an evil mind, is satisfying. Is it honourable, though? 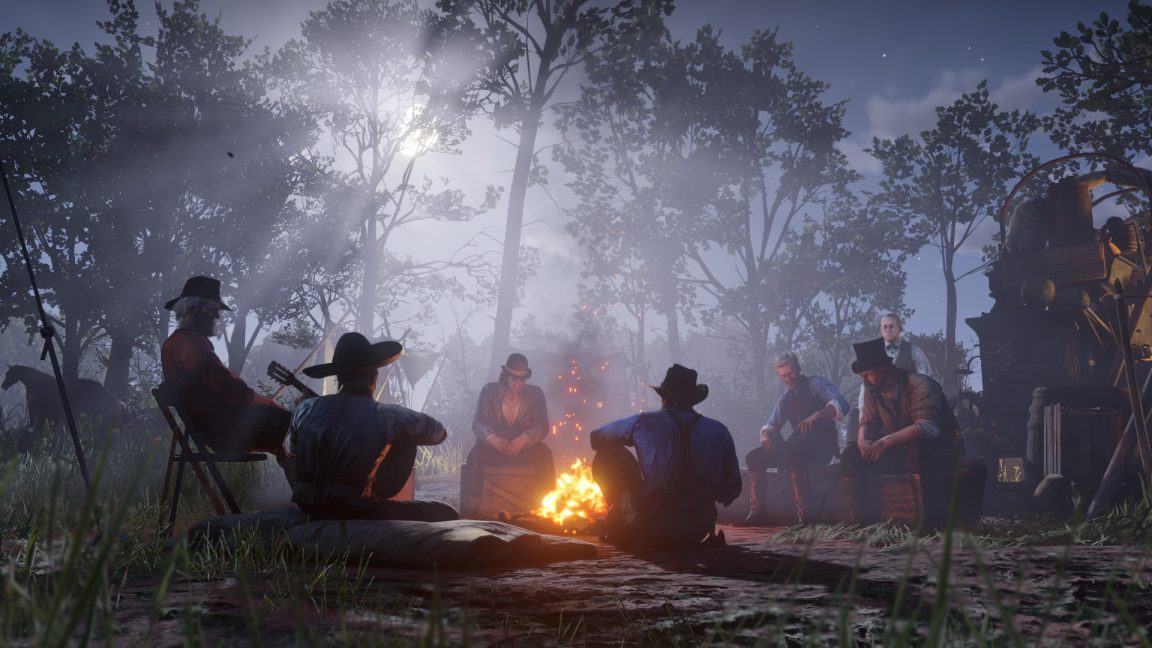 "There is always room for truly terrible people like Compson to stage a comeback, to attach themselves to whatever awful rhetoric finds its way into the discourse and to dedicate themselves to a new horrible cause"

Compson is far from the only person I killed who couldn’t defend themselves in Red Dead. I found myself veering much more towards virtue towards the end of the game. Early on, when I needed money, I watched a gold prospector panning for gold nuggets and promptly beat him to death after he finally found one so that I could take it myself. This was, on one level, a transactional decision – I wanted that gold – but I also made sure to justify it in the context of my character at that point. Early on, it seemed fitting to me that Arthur would do anything to survive and earn money for his gang. It was a blatantly unhonourable thing to do, and that seemed like something Arthur would have made peace with. Not long after, I shot a man because the nearest town was far away, and I needed his horse. This one, admittedly, is a harder to justify as being in-character.

There are downsides to the game’s – and by extension, the genre’s – insistence that you should be allowed to kill anyone not essential to the plot. The disgusting trend of YouTube videos of players beating and killing the game’s suffragettes is particularly distressing. These are characters who are depicted well in the game, and who Arthur more-or-less sides with (if you talk to the woman asking for the right to vote in St Denis she accuses Arthur of being a ‘cynic’ for his ‘women should be allowed to vote, even if voting is for chumps’ attitude – it’s a great exchange). None of this is real, of course, but living out a bad impulse in a game world – and then broadcasting it out into the world in this way – can often be a statement on someone’s real views and beliefs.

With this in mind, I’ve wondered what my willingness to kill Compson means about me as a person, if anything. In my mind, firing that arrow was less about killing him than stopping him – games can only offer so many ways of working through a situation, and by that point Red Dead has established a world where murder is the effective solution to a lot of problems. And of course, there’s the unreality of games, the fact that Compson isn’t real. That matters a great deal, but it also doesn’t mean that killing him is a meaningless act for the players who do it.

I will admit – without saying anything too specific, because of how badly this sentiment could be misconstrued or taken out of context if I am too specific - that I thought of a very specific Australian figure as I walked back to take out Compson. Not because I believe that person should be put to death, of course, but because they’re a symbol of how outdated ideas and policies can come roaring back at any moment, and how a national joke can once again rise to a position of serious power and influence if left unchecked. It’s their views, their beliefs, and the platform they’ve been given that I want to see shrivel and die, not them personally.

There was probably no need for this tbh. pic.twitter.com/0lFa5xqHGx

Killing Compson is, I’d argue, a symbolic gesture, and the game treats it as honourable because it’s the player’s way of attempting to kill the attitudes he represents. The man crying over the end of American slavery today is just as likely to find something new and awful to attach himself to tomorrow. It’s the only meaningful way of saying that you don’t believe that Compson is owed the respect afforded to a gentleman.

Games are still struggling to find ways to communicate lofty ideas of ethics and morality in ways that don’t involve killing or destroying people (or, for that matter, saving their lives entirely). One of my favourite mechanics in Red Dead is the way you can build up your honour simply by walking through town greeting everyone, and I’d love to see future games with morality systems take inspiration from it. But the end of Compson’s mission stands out as an interesting moment, and a great piece of storytelling through mission design, even if it comes down to whether you kill someone. For my part, I advocate for killing Compson – you can’t save the world that way, but in the context of the game, it’ll make you feel a bit better.