With the release of the Frontier Pursuits Moonshiner update to Red Dead Online comes some timed-exclusives for PlayStation 4 users and it also adds Photo Mode.

Get the lowdown below, cowpokes.

Bar owners can start a band to help foster a pleasant and welcoming atmosphere while serving up your own shine with the Band Expansion, free to all PS4 players until January 21.

Deep in the woods of Roanoke Ridge is the Murfee Brood, a backwoods problem of sorts that can be found in Beaver Hollow. PS4 players have early access to this all-new Hideout, and can clear out and rob the camp for rewards.

Wheeler, Rawson and Co. has special offerings coming to their catalog specifically for PS4 players which include four new clothing items and five new emotes.

Salizzo Double Bandolier: Many an outlaw prefers the double bandolier – because two bandoliers are twice as stylish. Naturally. 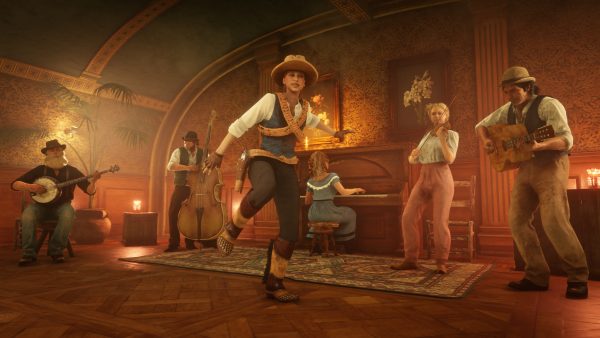 Alongside this new early access content, Photo Mode has been added on PS4, which lets you capture images from the frontier with the free form camera along with Filters, Stickers or Text.

In addition to Photo Mode,  players on PS4 will also get:

On December 19, variations on Red Dead Online Showdown Modes are coming to all platforms with a few select variants only available to PS4 players.