It wasn’t clear upon announcement just who was doing what with Rage 2’s development.

On one end were Avalanche, masters of explosions and open-worlds. On the other were id Software, the granddaddies of the first-person shooter. So, does that mean id is creating all the shooting bits while Avalanche is doing all the open-world sections, driving, and making things go boom? Well, no.

“[Avalanche is] the bulk of the developer,” id studio director Tim Willits tells me during QuakeCon. “I work with them every day, we have some guys that work with them every day, but we’ve just brought in specialists. It’s not like, ‘Here’s a bunch of id stuff. Go!’. We’ve just been working with those guys and passing knowledge back and forth, the experience, but those guys are doing the work. They’re just kicking it out of the park. It feels like an id game.”

The team at id has learned a lot over the years, and the modern id shooter was born, in a way, with the first Rage. “It’s kind of like a secret magic sauce and it’s all about the feel: does this gun feel right, does it sound right, is the speed right, is the range right, the damage over time?” Willits says. 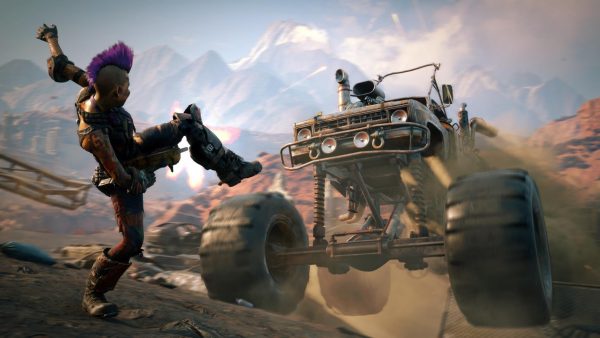 The studio has been brought on to other Bethesda projects previously to help tighten up gunfeel on various games. The studio helped in an advisory role for both Fallout 4 and Prey, to make sure those boomsticks really boom.

“It was more like, ‘Let’s have some meetings and talk over some things’,” Willits explains. “This is more actual work. With Fallout 4, we helped with some tech because our engineers are so smart, but it was more of an advisory role. I don’t want to overstate our credit on Fallout 4 at all.”

So what exactly is it about the developers at id that makes a game like Rage 2 benefit from a handful of embedded developers?

“The animations are so hard. I can look at an animation and see that it doesn’t feel right, but our guys are like, ‘Yeah, if you drop one frame here, add two over here, push that out a little bit and it will feel good’. You do it and you’re like, ‘Ooh, that’s it!’.”