The update, nicknamed "InterLASHional," introduces linguistic support for French, Italian, German, and Spanish. You can watch the official YouTube trailer below.

"The 'say anything' party game is going international," the description reads. "All the hilarious content from Quiplash 2, now in French, Italian, German, and Spanish, with 100 new prompts in each language." The description also clarifies that "you can still play in boring old English," if you want.

For those unfamiliar with Quiplash, or Jackbox Games in general, Quiplash is an online game that you can play using a free app on your phone - provided one of your friends has already purchased it (if you want to cut costs, you can arrange an eight-person split).

Quiplash can host between three and eight players and involves riffing of a prompt with witty answers, which the rest of the players then vote on. You get the same prompt as another player, but you don't know who. Your answers go head to head, and the funniest one wins. There are three rounds, and the amount of points you win increases as the game goes on. A full game takes about 15 minutes, making matches refreshingly accessible and consistently upbeat. 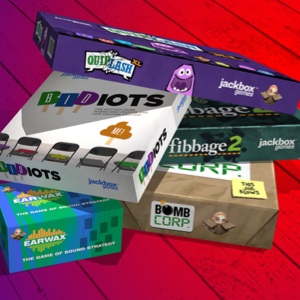 Considering that people in France, Italy, and Spain have been asked to stay at home, and are only supposed to embark on essential journeys to the pharmacy or supermarket in some cases, this new wave of quintilingual support provides an inexpensive means of playing party games with friends from the comfort of your own home. Setting up a conference call alongside the game could provide a way to hang out with friends while playing something lighthearted and fun, without anybody having to leave the house.
If you're interested in taking a closer look at Quiplash, you can head over to Jackbox Games website.
Quiplash is available to download on PC, PS4, Xbox One, Nintendo Switch, and even Apple TV, among other television services. Only one person needs the base game, as the other party members can join via the Jackbox.tv app that is available for download on iOS and Android devices.
If party games aren't quite up your street, you can also check out our list of the best co-op games.