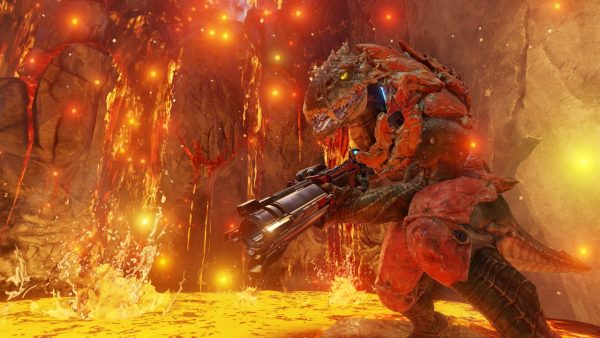 Speaking with Polygon, creative director Tim Willits told the site the reason Quake Champions with have both a free-to-play and paid option was so the studio can put the game in front of as many players as possible.

“At its core, it’s a free-to-play game with the option to buy the Champion Pack and just get in and play with all the Champions," said Willits. "There are a number of Quake players that just want to play their Quake, right? And they are familiar with the business model of our previous games, and they are totally fine.

“But then we also understand that we want to get as many people into the game as possible, especially outside of North America and Western Europe, where we have a massive fan base. So we want to have the flexibility to have a free-to-play option for those people.”

Paid and free characters will share same maps, according to Polygon, and they will each compete in the same brackets. The only difference between the two options is how players will acquire fighters other than the character Ranger.

In short, Ranger will be free, and if you buy the Champions Pack - the full game essentially - you'll have unlimited access to both Ranger and the other fighters available at launch. That said, Willits emphasized F2P players will be on an even playing field with those who pay full-price.

Those who do not purchase the Champion Pack can pay Favor, the in-game currency, in order to play other Champions for a limited time. Favor will be "easy to earn," and gives players the ability to try out all Champions. The in-game currency can also be spent on backpacks which provide access to rune challenges. Beating one of these challenges will hand the player a container of sorts which unlocks a new character and skins.

Willits said the studio hasn't decided just how long the "limited time" for characters bought with Favor will last just yet, but they hope to figure it out sometime during the closed beta period.

“I don’t want to use the word rent,” Willits said. “You do spend Favor to have access to them for a limited amount of time, yes. But you don't spend any real money on it.”

Bethesda sent over a fact sheet for the game, which reiterates everything mentioned above, but outlines it a bit better. It's posted below.

Play for Free… Or Upgrade to the Champions Pack

Quake Champions will be available for free to all PC players, with all maps, modes, and weapons included, as well as a starter Champion. Additional Champions will be available for purchase if players want to try out new abilities and attributes. Players can also choose the Champions Pack, a for-purchase version that will include the full roster of Champions and additional, exclusive bonuses. Free players can upgrade to the Champions Pack at any time. Both free and paid players will be able to play all modes and maps, uniting paid and free players in a single, endless test of skill.

Your Champion, Your Style

Players can upgrade and customize armor appearance, vanity items, weapons, and more. These add-ons will come in Common, Uncommon, Rare, and Epic forms through a loot box-style system. These boxes will be earned by leveling up, purchased using in-game currency that is rewarded through conquests, or purchasing through the in-game store for money.

Quake Champions is due for release this year on PC, and is currently without a release date. If you are interested in the game you can sign up for the closed beta.

The game was announced during E3 2016 at Bethesda’s offsite event.