Sony's technical wizards talk us through the benefits of PS4 Pro and the future of video game visuals. 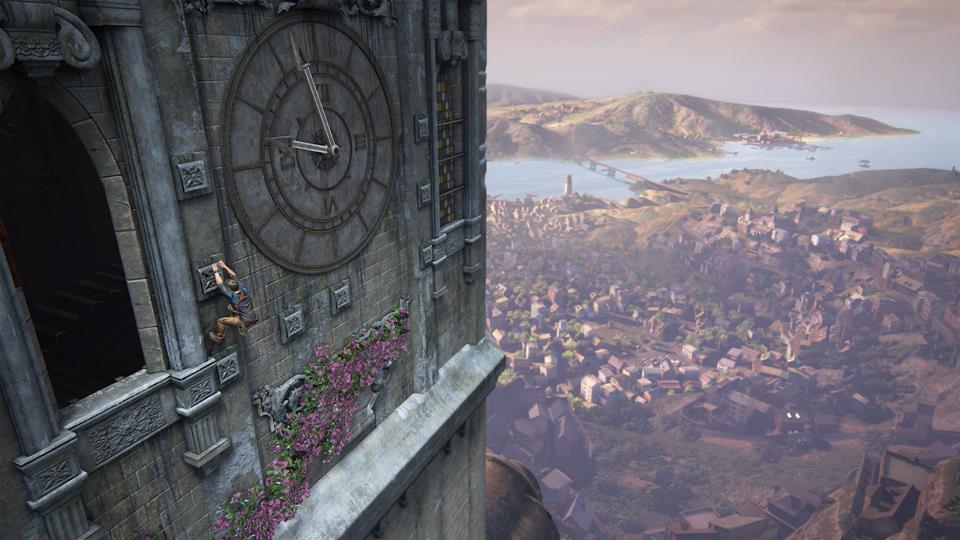 One of the nicest things about Sony's PlayStation 4 Pro announcement event was how intimate it was. The conference was a smaller and more modest affair than I'd expected, and afterward it gave way to an open-plan mini show floor where developers hung out in front of their games showing them off and chatting openly about just how Sony's new addition to the PlayStation range benefits their games.

Directly behind the stage were three screens showcasing the work of Naughty Dog, a studio that's well known for mind-boggling feats of technical achievement. The company has been Sony's go-to technical powerhouse for a while now - so just how have they found the transition to and working on PS4 Pro?

We pulled aside Naughty Dog's Christian Gyrling to find out more. Gyrling is clearly excited about the new technology, and after serving as a lead programmer on Uncharted 4 has been tasked with heading up PS4 Pro development of PS4 Pro patches for both that game and The Last of Us Remastered.

As we chat, he beams at the impressive-looking demo where Uncharted 4's Chapter 3 and Chapter 12 swipe back and forth between Pro and non-Pro modes. The difference seems to be the type that's harder to quantify on a stream or a screen grab, but that offered by HDR in particular is profound. VG247: So, this must be a big moment for you. How do you feel about the announcement? Do you feel like the benefits are getting across to people?

Christian Gyrling: So, I was one of the lead programmers for Uncharted 4 and I've been the main driver of all the PS4 Pro development at Naughty Dog, so this is something I feel very strongly about. I'm very passionate about it because I've seen, and I'm very happy to be able to show everyone else, what our games can look like. And it's not just -- really it's what they do look like, what they always looked like, but we no longer have to restrict it to the lower resolution, the lower colour space... we can open it all up.

It's the small things. Like, we're looking at the screen right now [On-screen is Nathan Drake idling underwater in Uncharted 4's Chapter 3] - even the smallest details of the highlights on the little green on the corals... these are colours that were there in my head, I thought it looked that good already. But now, sitting down, I really feel like I'm watching some nature documentary.

"We pride ourselves on making the best looking game possible on the consoles. That's what we do, not because we're told to, but because we want to. We love it."

You really have to pick up the controller and play it yourself. Still images... even right here where we're not actively moving around... it doesn't do it full justice. Playing it through at the higher resolutions, feeling that image stability and getting the highlights that are shining like the reflection in the puddle on the ground or through the window of the building, the acoustics underwater... those are the moments where you go 'Whoa, whoa!' - it really is.

It feels a little to me like looking at two photographs from two different power cameras - you know the detail is there in real life, and your mind fills it in for the most part, but it's still a surprise when that detail is there in the photo. It's a hard thing to convey over the internet.

Yeah, and hopefully you guys can help us do that! I'm sure that many times you take the classic HDR comparison which is obviously bright inside, dark outside, all of that. But there are many cases when you take a picture and you feel like... it's not really capturing what I'm seeing. It might not be bright enough or dark enough or the colours aren't really popping the way you feel they are - you can't see the things that made you take out the camera in the first place.

Going to the high dynamic range plus adding the resolution to kind of fill in all the details, it's getting us so much closer to being able to realise the images - get it to be so that it is the way it'd look in the real world.

You guys are different from many of the developers here today in that people like Bioware, Crystal Dynamics and Ubisoft all have high-end PC ports. This gives them a high-end bar to almost work backwards from visually. Do you think that's made this a harder challenge for you as console-only developers?

Honestly... no. Like, we always... all of our games have pushed the visual bar. That's what we do. We pride ourselves on making the best looking game possible on the consoles. That's what we do, not because we're told to, but because we want to. We love it. Delivering the gameplay, immersion and groundedness in those worlds... it's cohesiveness, that's what we do.

When it comes to taking the PS4 Pro, really what we're doing here is nothing more than just removing the smudge from your glasses, we're changing your prescription so you get to see everything more clearly. That's the direction we're going. We're not comparing with a PC version or something else. I mean, yes, we're keeping an eye on what other people in the industry are doing, but we feel that we're always pushing the envelope, we're always trying to improve.

No doubt as we speak, post-conference, people on Twitter and NeoGAF and what have you are scrutinizing trailers, crunching the now officially released specs... but you've had a lot more time with this thing. What's your word of advice to people trying to crunch numbers and such?

I mean, I think the set up we have here today is perfect. There's a big TV and there's a couch that's relatively close. I mean, you wouldn't want to sit any closer than this enjoying video games at home, right? With what we're outputting - the higher fidelity, being able to send the colours that we really want to show you like the HDR colours - that is incredibly exciting to us as we can now actually send the vision we're having in the studio to you on the couch.

You can crunch numbers all day, but ultimately it's about what you do with the numbers and what you do with the power. The more than double the power of the GPU, the boosted clock rate of the CPUs allowing those smoother frame rates, being able to support our existing PS4 fanbase without really taking anything away from them... Like, all we're doing is adding stuff, adding HDR support even to the base PS4 owners. This patch that'll be available for release in November will allow both PS4 Pro owners and regular PS4 owners with an HDR-compatible TV or a 4K TV to enjoy the benefits.

"HDR games from now on, moving forward - I think almost every single game will start supporting HDR. This is the future. We see little to no reason to not support this. It's almost no cost, close to zero cost, to expose the HDR... but it's an enormous benefit."

That's really where it comes from. Tech is only there to support. Ultimately you'll see vastly different qualities of games on any game console. You can say, well, specs are one thing, but look at the diverse difference in games - it really comes down to what you do with those specs.

Obviously you guys aren't just working on patches. Obviously, you're also not really talking about that right now. But beyond the now... how much is the existence of PS4 Pro changing new projects now that you can develop with it in mind from day one?

Oh, we're changing already. It's kind of like... you're adding a few more components to the artist's palette in terms of what they can do. We've never been able to intentionally show the range of colours we have here. I mean, they wanted to but they couldn't really do it. Now, we're really allowing especially our lighters but also all of the artists to create content that is pushing the boundaries over the restriction that was there before.

They're also knowing they can do that without having to restrict things down. We have colour grading, we have all these various things like tone mapping to make sure we're still getting all the colours we want but within the existing HDTV colour spec. Knowing we can do more, like why should we only use the dull colour of green when we can use the really, really bright one? We're not really doing that, but now we can realise the full potential of the image.

We're really excited to start with that process from the ground up; the artistic choice can be in the hands of the artist even more. HDR games from now on, moving forward - I think almost every single game will start supporting HDR. This is the future. We see little to no reason to not support this. It's almost no cost, close to zero cost, to expose the HDR... but it's an enormous benefit.

Disclosure: This interview was conducted at the PlayStation Meeting event. Sony covered flights and accomodation so we could be there to see their new consoles.