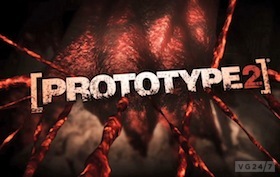 Available now on PlayStation 3 and Xbox 360; due on PC in July.

A bundled code gives access to Radnet, a pile of bonus content to be released as DLC.

Follows on from 2009's Prototype, but casts former protagonist Alex Mercer in the role of villain.

Has become slightly notorious for its frequent profanity and heavy revenge plot-line.

It can't be a coincidence. Prototype 2 released on the same day as The Avengers, a movie that has fast picked up critical acclaim, and which kicks off a summer season of yet more highly anticipated comic-book inspired blockbusters. The wave of interest in these adaptations must be at its zenith right now, and perhaps as a knock-on effect, Radical Entertainment's superhero-themed videogame found itself elevated to the top of the UK charts.

But playing Prototype 2 directly after watching the film, where Mark Ruffalo's Hulk holds an integral role, makes the likeness between him and this game's anti-hero protagonist, James Heller, feel like something of a missed opportunity. It may be that the developer's history with the Hulk brand flashes up in the back of my head whenever I play, knowing full well that they took charge of the movie-videogame tie-in back in 2003, but Radical's latest does feel like it could have easily starred Marvel's leading green man once again.

Nobody expects these kinds of games to succeed; even today expectations are cautiously managed when movie franchises turn interactive. But in this case, not only would it have been a surprise hit having an iconic superhero attached to this flavour of explosive gameplay - perhaps just shy of the impact enjoyed by Batman Arkham Asylum for its extra polish and length - but if Activision had buckled and bought the license, the pull of its fiction would also have made it a far more engaging game to play in general.

The basic formula for the Prototype series is clearly influenced by the Hulk's legacy either way, it's not too great a stretch. The premise hinges on a sandbox adventure where a raging mutant, constantly at odds with a conspiratorial government, takes on missions that lead to all manner of tarmac-smashing bedlam on the city streets. He runs up walls, bounds several feet high, and leaves cracks and dents where-ever he lumbers. The idea that he's also in constant pursuit of unscrupulous scientists and military personnel, each hell-bent on finding the source of the very same power, pushes it very close into Hulk territory too.

Of course, there are places where Prototype 2 walks down a path all of its own, although not necessarily with the greatest results. There's the shape-shifting mechanic (something that would easily translate to the Hulk's reality of altered DNA and test labs), and then there's Heller's habit of speaking his mind all too bluntly.

Heller's weapons have a lot of personality
though - here's the Whip and Hammer.

His constant quipping could have given him a window to flesh his story out fully, but it instead makes him out to be fairly single-minded and tedious grunt. He's zealous, insufferably angry, and only breaks away from his F-bomb blitzkrieg whenever his family (presumed dead) are mentioned – at which point he swaps that out for all-out verbal nuclear warfare. The alternative is simply more appealing. Transforming between the shy, sensitive scientist Bruce Banner and his raging Hulk alter ego would have at least made for a clear-cut duality to a leading videogame character; a sharp divide between his bursts of rage and reason.

It's not that I'm one of those prudes against swearing in games. Nope, it's fine – and in the case of Prototype 2 it can be a laughably good match for its extreme, chaotic gameplay in parts. But, without exception, every boss you encounter kick-starts some mocking banter about how badly Heller's going to fail in his mission, and without missing a beat he, no doubt channelling the wit of a Chaucerian script, bursts in with lines like "bitch, I can't wait to beat you to death with this fat bastard's bloody limbs! " Pure poetry, but being in the company of the man can get pretty tiresome after the third hour or so, and it's not like this medium doesn't have these bases covered already.

The appearance of BBFC's age 18 certificate on the front cover is par for course, but when considering the lost potential audience as a result, in the end it doesn't feel like the pay-off is worthwhile. It's to Radical Entertainment's credit that it has at least had a stab at setting up its own universe, even if it does overlap with the established tone of others. But, for me at least, the hook of playing these games is down to how much I want to be the leading character, and in James Heller's case, that's not terribly much at all. After a visit to the cinema, right now I have other heroes in mind.

There's huge potential for the Prototype series to go places if it wants, though when it comes to its next leading character I'm left to wonder: "what next?" The closing scene being as open-ended as it is, another entry in the series could potentially be on the cards by the time the next generation of consoles hit. Hopefully that will be enough time to push its mythology towards a place it can wholly call its own.