Getting started in Alola. 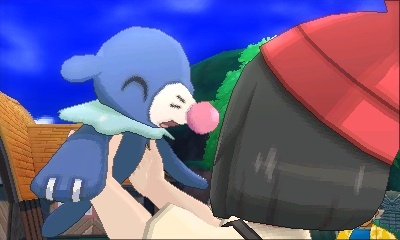 So you've just moved to Alola. Welcome! Some of you might be familiar with the world of Pokemon intimately, some might be lapsed trainers and some might be all new. All will do pretty well here - Alola is a welcoming and fun place to be.

First, however, we have to get through the tutorial and get to the game's all-important major first choice: which starting Pokemon to choose. So our walkthrough is complete, here's a little about that.

When you start the game you'll be greeted by Professor Kukui. As part of this process you'll choose a basic look for your character, though don't fret over this too much. You can change your clothes, eye colour, hair style, hair colour and the like in the game proper. You can't change your name, skin complexion or gender, so pick those wisely.

If you've already started playing and find yourself needing to reset Pokemon Sun & Moon, you can do so by pressing Up, B and X simultaneously on the title screen. This will delete your previous save entirely - as is traditional for these games, Pokemon Sun & Moon are limited to one save per copy of the game.

The first steps of the game are pretty simple, all told. You really don't need to have us tell you what to do. Here are the basic steps:

Which starter Pokemon should you choose?

So… the time has come. You’re standing in front of the Melemele Island Kahuna and you’re faced with a difficult choice. No, a nearly impossible choice: Which Pokemon do you choose?

Will it be fire-type Litten, water-type Popplio, or grass-type Rowlet? This decision is never easy... but we're here to help. That's our whole thing.

It's a bit long to squeeze onto this guide page, but we've built a whole separate page all about Rowlet, Litten and Popplio - Sun & Moon's cool new Starter Pokemon. No specific one is best, but they all do have their strengths and weaknesses, so we've written about that.

We've also produced another separate page about the Starter's final evolutions. There's spoilers here, but if you want to see how the three starter Pokemon end up and see what they'll be good at by the end-game, you can find that here.

Once you've chosen, you'll end up in a rival battle.

It really is a simple battle: just hit him until his Pokemon is KOed. It's more or less impossible to lose.

With Hau defeated, you'll be let loose towards our next destination and the first proper step in our story, Route 1. Just sit through some more story waffling first.