Pokemon Go players can soon see who's at the top in GO Battle League through leaderboards.

Starting Friday, April 10, Pokemon Go players will be able to see who's at the top of their game in Battle League through a leaderboard.

The leaderboard is launching just after the GO Battle League changes from Ultra League to Master League, and it will show the top 500 Trainers in the world and their Trainer nicknames, teams, ranks, ratings, and total matches.

Rankings will be based on the previous day’s in-game ratings for Trainers rank 7 and up. Trainers with active disciplinary action or inappropriate Trainer nicknames will be excluded, so keep that in mind if you have yet to create a nickname.

To celebrate the launch of leaderboards, a GO Battle Day event featuring Marill will take place on Sunday, April 12. The event will feature the Aqua Mouse Pokemon and activities related to the GO Battle League. This Water/Fairy-type Pokemon evolves into Azumarill. 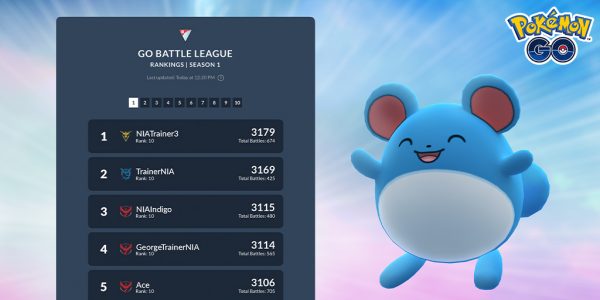 The more GO Battle League battles you win from 11am - 2pm local time during the event, the more chances you’ll have to encounter Marill. During this time, the Pokemon will also be a guaranteed Basic Reward after your first and third wins.

Use a Premium Battle Pass, and Marill will appear after every win as a guaranteed Premium Reward. You will also receive 2× Catch Stardust for catching Marill during this time period.

In addition, all day on the Marill Battle Dat, you’ll be able to complete 20 sets of GO Battle League battles, up from the regular five sets, for a total of up to 100 battles.