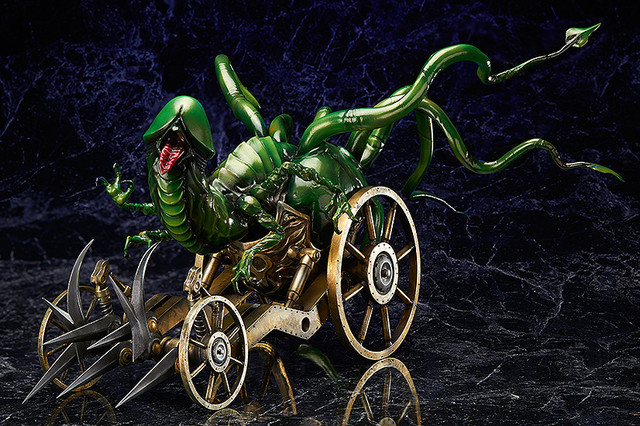 Persona 5 is out next week, and critics loved it, as did Alex, who called it "the best Japanese RPG in over a decade."

Alex also brought this Persona 5 statue to my attention - that he's definitely mulling over pre-ordering - of the series' Demon Lord Mara a.k.a. a giant penis in a chariot with tentacles, holding what may or my not be a penis staff.

"'You may think you can defeat me, but I'm clearly the bigger man. Gwahahahaha!'

"From the RPG series first released in 1992, now celebrating its 25th anniversary 'Shin Megami Tensei' comes a long-awaited figure of the Demon Lord Mara! The creation of the figure has been carefully supervised by 'Demon Artist' Kazuma Kaneko, creating a faithful rendition of the demon lord that extends an impressive 40cm in length.

"The tentacle parts of the figure are made from a flexible material allowing you to bend them into various different poses, and the wheels of the chariot as well as the blades in the front are also all articulated for various different display options. Be sure to add the Demon Lord to your collection and have him inspire envy and terror in all who look upon his magnificent form!"

Mara will set you back around $415/ £300, but you can display him in your home with pride. Pop him on the mantelpiece when guests come over as a lively conversation starter. Position him in the the bedroom to set the mood. He's good to go for any occasion.

You can pre-order now for delivery after release in November 2017.