Patrice Désilets is best known for helping to create the Assassin's Creed series. He's now starting a new chapter with Ancestors: The Humankind Odyssey - but it has at least a little in common with his most famous work.

After heading up Assassin's Creed, Assassin's Creed 2 and Assassin's Creed Brotherhood, Désilets had a false start in the form of 1666: Amsterdam, a new title that would ultimately be cancelled thanks to the collapse of publisher THQ. He's now back as an independent developer, with his latest title set to be published by Private Division, the new indie-focused arm of Take Two Interactive.

VG247 had a chance to sit down with Désilets briefly at Reboot Develop Dubrovnik, a boutique games development conference. The discussion covers Ancestors, Assassin's Creed, and the lineage linking the two. Here's our chat in full:

VG247: So … Ancestors! The keyart shows evolution, right? The game is about evolving from an ape to a man.
Désilets: From an ape to another ape.
VG247: To another ape? Explain it to me
Désilets: Because man is at the end of it all. Ancestors right now is from 10 million years to 2 million years, and you have homo sapiens like us at the end of it… so you have the human, I guess. So it’s from the last known ancestors of all the big apes on this planet.
VG247: So that picture up there - the evolution of man - you’d go from the first one to the second one.
Désilets: To the second one, roughly.
VG247: Yeah, and then the others are coming in later games?
Désilets: Later volumes. Volume 1 is roughly between 40 to 50 hours’ worth of gameplay, so it’s not a little thing. Tomorrow I am gonna talk about it. It was episodic, it’s not anymore because Private Division... I don’t need to ship something to make money right away, and also it worked on paper and then it was more interesting to actually make a full-blown game than cut it in multiple episodes.
VG247: So the mechanics change as you evolve throughout the game?
Désilets: Yes. Uhhh… Yes. Depending on your choices, it’s really, this time around, like you know. I made games where you’d follow what I wrote for you – like mission-driven type of games and now it’s more like a – really, a sandbox with systems that depends on how you wanna play it. Depending on your choices, and depending on what you do you’ll evolve in a certain way, until you physically change. For example, you may develop crafting faster than walking on two legs, and another player will be walking on two legs first.
VG247: Do you skill up based on repetition and doing the same kind of act?
Désilets: Yes, but there’s also… by doing actions, you gain neural energy that you can then spend into your neural systems. But depending on how you play, it’s one area of your brain that you can upgrade vs another one because you’re not choosing your communication skills – you cannot upgrade that, for example.
VG247: And it’s totally freeform, right? I saw the video you put out the other day.
Désilets: Oh, yeah. There’s the very first few minutes I kinda teach you core mechanics but after that, now it’s your turn. 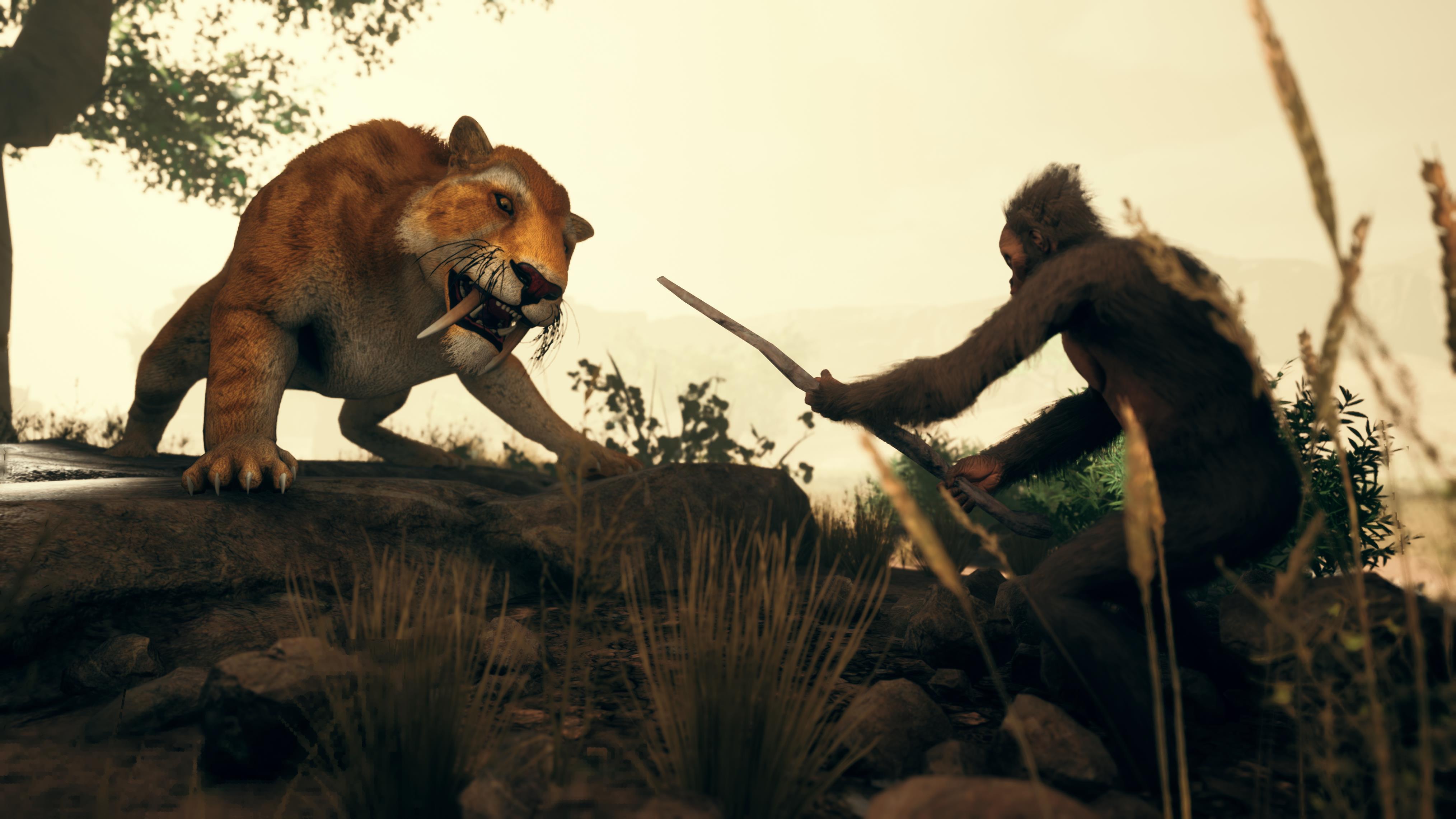 VG247: Would you class it as a survival game, then?
Désilets: Yeah. Third-person because you do things differently from other survival games because you stay in third-person. Actually, It’s your character, you don’t go into inventory and combine stuff. It’s really, like I say, you’re always Mario.
VG247: You’re always Mario?
Désilets: You’re always a third-person character. But, at the same time you play as a clan.
VG247: Ah, so when you die do you go to another…
Désilets: You transfer into another clan member, which you can also do by yourself – you can switch
VG247: And what happens if you murder all of them?
Désilets: Well, your clan would go away. Your lineage would go extinct.
VG247: And then you start again?
Désilets: Yes.
VG247: And that’s potentially 30-odd hours of progress gone.
Désilets: Yeah, potentially. A bit like The Long Dark. You can play a long … and suddenly you die and it’s ‘yeah, sorry’.
VG247: I mean, It adds a meaning to death, otherwise it’d just be pointless, wouldn’t it?
Désilets: I guess so, I guess so. When you make your character progress you can experiment right away but then you need different systems. You need to eventually make a new generation. And you’ll make babies.
When you do a generation – which is 15 years in the future – well, a generation is passed and there’s no more babies, and we need a baby to evolve.
VG247: So you set up safety blankets as you go through the game?
Désilets: Yes. There’s multiple layers of evolution inside the game, and time passes also from 10 to 2 million years so it’s eight million. There’s multiple ways of moving the time.
VG247: What do you think is the coolest thing about the game?
Désilets: That no two play sessions are the same. I am still having a blast playing my game. You can stay on the ground, and this is how you may want to play, but then you can go up in trees and swing and then you’ll be arriving at one particular spot while the sun is rising and be the first to discover something. If you were there at the very beginning of it all. Like when you have some epiphany, almost, like ‘can I do this?’ And then us or the other stranger, ‘yes’ as much as possible. And I didn’t tell you to do it.
VG247: Obviously it’s set way way in the past – does it share any other DNA with Assassin’s Creed, other than being historical?
Désilets: Some people said yes.
VG247: Maybe ‘cause of the climbing.
Désilets: Yeah, the climbing. How you control the character. How the character behaves. It’s not a normal game, I don’t do normal games at the end of the day. It’s been ten years since I shipped a game. But life is what it is.
I remember there was a guy we hired who came to see the game before deciding to join our team. At the end I go ‘what do you think?’ And he says ‘it’s a Patrice Desilets game’ So I guess there is that thing. This time, It’s not about the hero. 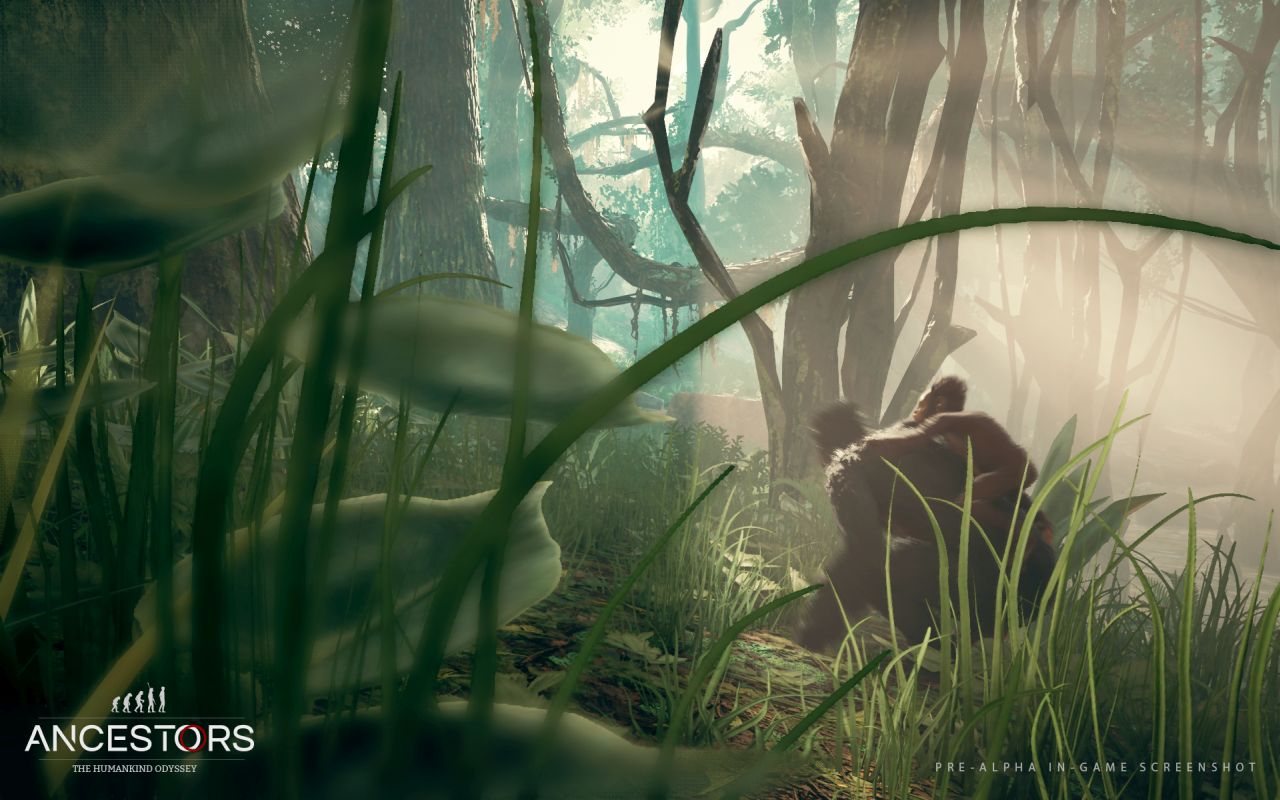 VG247: I mean, Assassin’s Creed is kind of about generations as well, isn’t it? It’s got that ...
Désilets: I guess so, yes.
VG247: And passing memories through DNA as well, like lineages.
Désilets: Aha, yes. I guess that really fascinates me. I didn’t even realize, the first thing I ask the player to do is find a hiding spot. Just like in Assassin’s Creed, that you find hiding spots. It’s like ‘holy shit’ I didn’t know. Because it made sense. You play as a baby, so you’re afraid. You must hide the baby, so I say go find a hiding spot.
VG247: But you called it a hiding spot in the game, cause that’s what it is.
Désilets: Yes, it’s a fucking hiding spot. There was a TV show about creativity the other night, really interesting. A guy went and did interviews with different writers, comedians, and musicians. Most of them said roughly the same thing: ‘We’re not that creative, we have kinda one book in us, and we write it all the time and make it better and better and better.’
VG247: I think everyone does that in a way.
Désilets: Yeah, and I was watching it earlier… I’ve done the same fucking thing. If you look at it, all my games are about a guy running around with a sword.
VG247: But now you’re running with a twig, and you’re not a guy.
Désilets: But you’re an ape running in a dead branch, and I like history. But that’s only because when I was starting Panache I didn’t have Ancestors yet.
VG247: Didn’t you have 15 games?
Désilets: I wrote 15 game ideas that I had in me. Now I can, they’re mine now. One was this gruesome game - it would have been a bit like Human Fall Flat but different. Human Fall Flat came after, it’s an example of what I had.
VG247: Is it because of the physics in the game?
Désilets: It was the physics, it was more the white environments that was more like it, and some people said ‘Yeah, but where’s Assassin’s Creed?’
VG247: How do you feel about Assassin’s Creed now, about where it’s gone?
Désilets: I haven’t played them. I can’t. I cannot play Assassin’s Creed. The last one I tried was Assassin’s Creed 3.
VG247: That’s the bad one.
Désilets: I know, but I played for two hours and I was working and was not having fun.
VG247: Because you’re critiquing it, right?
Désilets: I am used to critiquing and saying, ‘Could you change this could you change that, what about this, what about that?’ I couldn’t.
VG247: If you were still at Ubisoft, would you have gone down the RPG route?
Désilets: Oh man. That’s a big if.
VG247: Did you not have any ideas for future games?
Désilets: I don’t have an interesting question to … it’s not that I am afraid. I just like, I do my thing.
VG247: You’re focused on this now.
Désilets: And plus I cannot compare, I know what they’ve done. Except when the fans are writing me.
VG247: Do they still bug you about it, then?
Désilets: Every day.