My partner and I don’t often argue anymore, 11 years into our relationship. We can talk things out, and little bickers are short-lived before one of us caves and asks the other for a cuddle.

When we do argue, though, it’s always about dumb shit: who has exerted the most effort in any given day? Where the fuck is that thing that I put right there and is now not right there? The kids have been hell so we’re snapping at each other over fuck all. Yes, I ate your last onion ring when you weren’t looking. And in that umbrella of dumb shit, there’s Overcooked 2.

In China, players have nicknamed Overcooked “Divorce Kitchen” because of the sheer, unfiltered rage it manages to bubble up inside of your very soul. But when you do sync up and nail a round, there’s nothing quite like it.

Overcooked 2 made me shout "Just throw me the goddamn tagliatelle" at my seven year old.

Anyone who’s worked in a kitchen will understand the stress of that working environment. I know it’s not exactly Michelin star-quality, but I worked in a Wetherspoon pub in a dark period of my late teens, and I’d sometimes open the kitchen, cook all morning, go home, then wash and change to do the nighttime bar shift.

Yes, I was essentially a microwave technician who occasionally fried a thing, but let me tell you: kitchen work is hell. You spend your morning prepping and then everyone decides to eat at once. The ticket screen beeps with each new order and you start to lose track of who wants what as everything burns around you and you run out of plates. I’m not proud of this, but I once threw a soft, cold jacket potato at my head chef’s head where it exploded upon contact. In my defense, he was being a prick. Overcooked perfectly captures that same hell, unwashed plates, flying ingredients and all.

Because it is essentially a playable stress dream, it’s hard to quantify what makes it one of the best co-op games around. Let’s circle back round to my Overcooked co-op buddy - my actual, real-life best friend: my partner. She doesn’t play video games. I can’t stress that enough. In the 11 years we’ve been together, I’ve tried and given up trying to get her into them. She couldn’t give less of a shit. She’ll play Farmville until her eyes bleed, but the fact she didn’t grow up with games means controllers are alien to her. 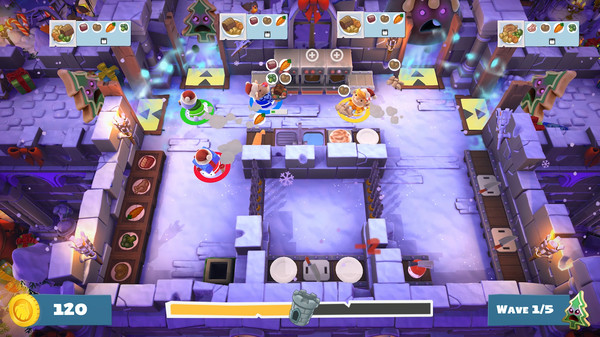 Overcooked, in its genius simplicity, overcame that barrier. You have a button to throw stuff, one to pick up, and one to dash, and that’s all there is to it. The only initial confusion was the fact throw and chop are on the same button, so she’d often throw vital ingredients directly into the abyss instead of placing them down before chopping.

In those early days, I took the role of head chef and barked out requests for stuff that needed doing, until eventually it got to the point where, if there were a soft, cold jacket potato around, I’m sure it would have been sent directly into my bald head.

Then there’s the fact I’m dash-happy in Overcooked. I don’t like to go slow. This means there are times when I bump her directly into the void, along with those ingredients she keeps throwing away.

At one point though, something happened - we started to sync up. Through repetition and perseverance we became culinary luminaries. We’ve now gone through Overcooked 2’s entire campaign and sweeped the floor for three stars on each level (other than two of those bastard levels where you have to control platforms with a joystick), and we’ve even done the DLC. I reckon we’ll even try for the bonus four stars eventually, even if they do seem near-impossible without a full squad of four. Yes, we tried to rope our kids in to help with this, but it made us want to disown them.

Can anyone else smell that? Smells like...mmmm...like something's cooking. ? pic.twitter.com/uOh3bpX3YM

The Overcooked 2 team just tweeted out a new tease for some DLC, and I can’t wait to see what terrible mechanic they’ve conjured up this time. We’ve already had backpacks, water pistols, and coal fires. Hopefully the next DLC comes with a jacket potato plush that you can throw at a loved one’s head. Hurt us more, Overcooked team. Hurt us more.