When Outriders gets it right, it gets it really right.

Flashing forward into a gawking group of goons, one swish of an Altered arm sizzles bones out of bodies with a bolt of blue lightning.

Falling back out of the hail of bullets, I take a second to recharge and drop a defensive ability while my others are on cooldown, popping off a few longer-range shots which explode into a volley of fireworks on impact.

This is Outriders at its frenetic best. High-intensity action combining flashy and powerful abilities with gung ho, trigger-happy enemies in a non-stop slugfest - but I’ve already made my first mistake.

In retreating to a ‘safe’ distance I’ve turned off my only really effective method of healing.

As the Trickster class, to stay healthy I have to batter the opposition at close range, but in the wide-open arenas of Outriders - with my movement abilities on cooldown - the only thing that stands between me and the unceasing barrage of gunfire is one of the roughest cover systems I’ve seen in a long while.

One of Outriders’ four core pillars or ‘mantras’ is “be aggressive - cover is for cowards”, and I wonder at what point in development this shook out.

Was it before the cover system proved to offer about as successful a defence as Rudy Giuliani, or after?

Outriders is one of those games where you’re always getting stuck on scenery, rolling into walls stickier than Spiderman’s handshake, and galumphing from pillar to post with all the grace of the semi-hungover trudge home from the bar at 4am.

This feels like Outriders in microcosm: full of great, action-packed and innovative ideas, but unevenly implemented to the point of frustration. 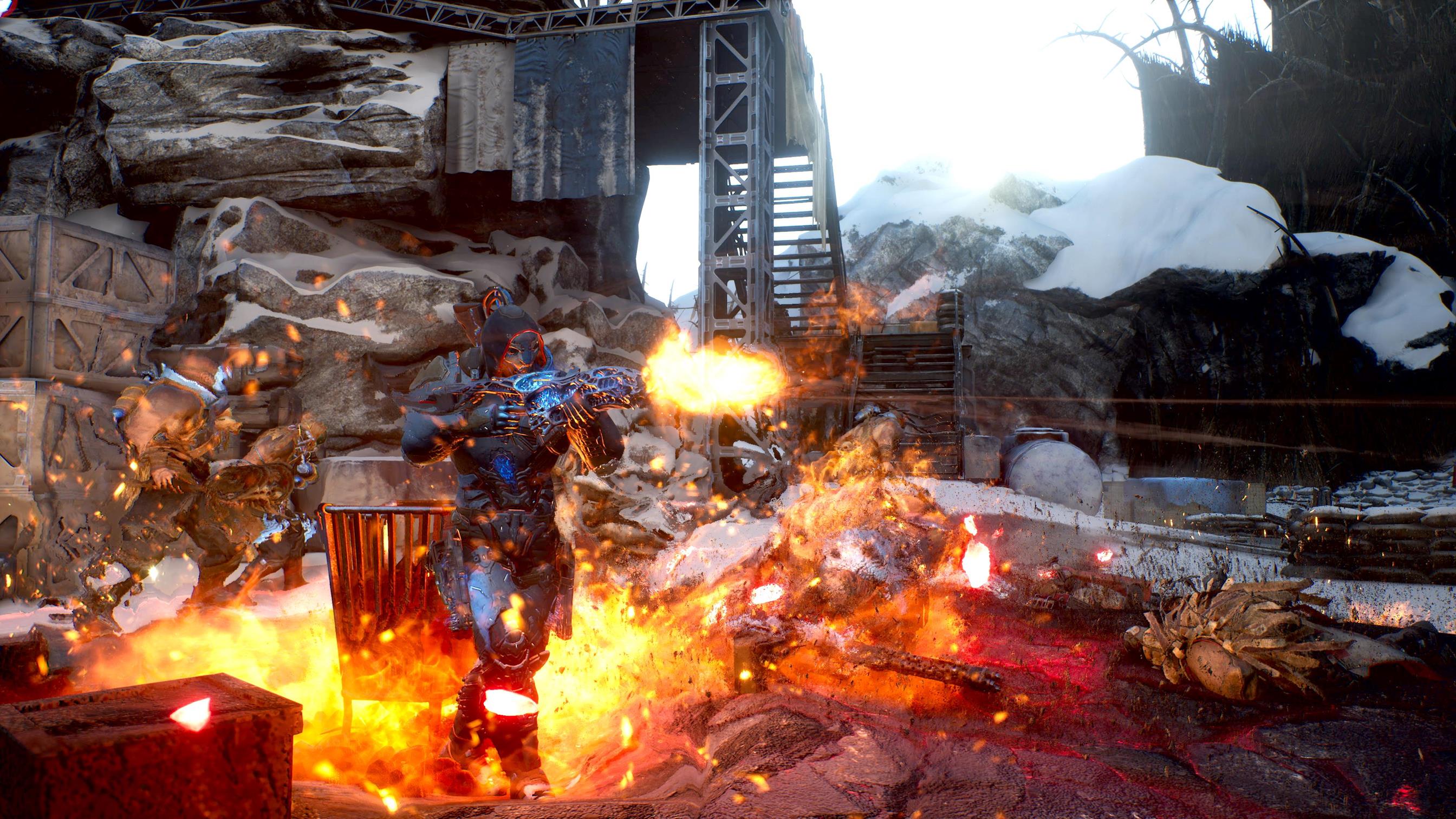 Pre-release, People Can Fly - the Outriders dev studio also behind Bulletstorm and Gears of War: Judgement - positioned their game as a dark, mature, story-driven experience, different from other looter-shooters in making its narrative missions the main event.

Outriders game director Bartosz Kmita even went as far as saying that shooters, “don’t have to have a stupid story,” and that their game had a world and characters you should really care about.

But in practise, the tone comes off more like a ‘90s disaster movie - think Armageddon or Independence Day - all quips and winking one-liners.

At one point a character is casually explaining that you need an oxygen-producing chemical to survive the atmosphere of your next destination using normal words that normal people would use.

Then your assembled gang are like: ‘woah, put a sock in it poindexter - in English, please’.

So while there are elements which skew much darker, Outriders is definitely on the goofier side and revels in that silliness.

The inconsistency continues into the core mechanics as well, but there are loads of things that I really like about Outriders too.

The merchants you encounter in towns throughout the planet of Enoch stock things you actually want to buy, and the weapon mod system - which lets you socket any item ability you’ve learned from a dismantled piece of gear into any other - is a beautifully innovative way of letting you actively shape your playthrough instead of grinding out god rolls.

This incentivises you to ditch your rarest gear periodically to harvest their mods, effectively eliminating the problem from other shooters where you’re clinging onto cool stuff way past its sell-by-date. 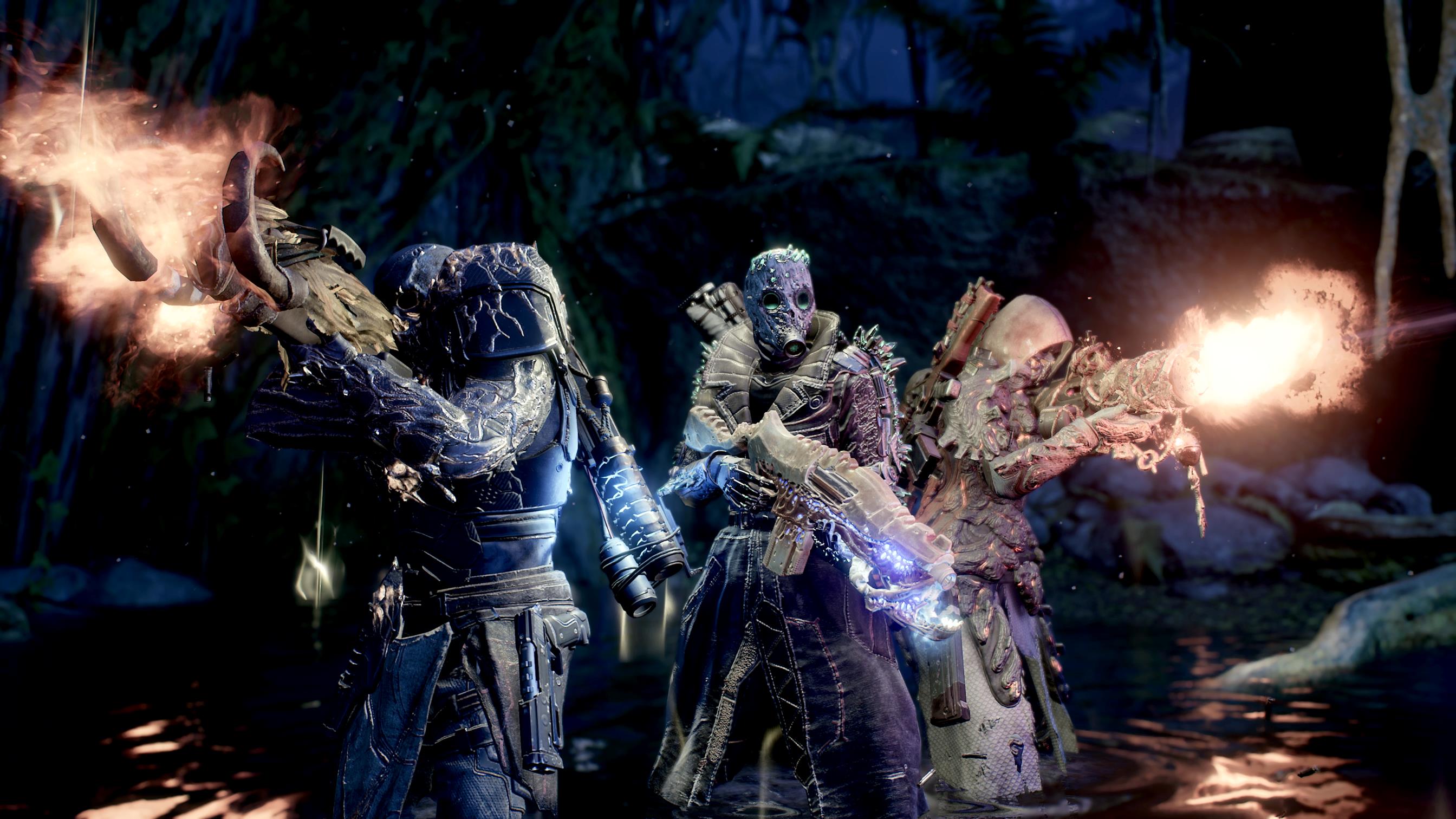 However, Outriders is so stingy with its Legendary weapons, I’m not even sure why they put so much effort into creating so many awesome guns and armour sets.

If the story is supposed to be the main part of Outriders, why withhold all of the coolest stuff until you’ve rolled the credits and dived into post-game Expeditions?

It feels like you’re encouraged to treat your weapons as tools and harvest their mods to maximise a build, but then deterred from doing so by the miserly drop-rate.

As well, to have the best chance at fun loot, you have to play on the highest World Tier available to you, and this system, for me, is one of the best and worst parts of Outriders.

World Tiers are basically variable difficulty levels, where you have essentially a second XP bar which fills as you defeat enemies without dying. Once the bar is full, you can climb up a World Tier, giving you a better chance at greater spoils, but also scaling the difficulty of every enemy you face.

This means that Outriders is constantly balanced to be as difficult as you can muster at all times. Which on the one hand does so much good for making it as sharp, intense, and engaging as possible, but once the clunk kicks in, or if you’re butting against some particularly lumpy encounter design, gets incredibly aggravating.

Random enemy types seem wildly more difficult than others, and the constant onslaught can leave you feeling massively underpowered without careful consideration.

There are kernels of great ideas all throughout Outriders: in its combat, in its crafting, and in its mechanics in general, but its jagged edges hold it back from being really fantastic.