An Outriders demo is coming on February 25, and today, People Can Fly outlined what to expect.

The free demo for Outriders is coming to Steam, PS4, and Xbox One. If you want to play it on PS4, you will need a PlayStation Plus subscription. It will also be available on PS5 and Xbox Series X/S.

The download size for the demo will be 24GB on PC, and a minimum 22GB on consoles, possibly more after decompression on both platforms. Pre-loading is not currently planned to be available for the demo.

Crossplay will be available in the demo, but it will be in beta form and will need to be manually enabled via settings. There is no time limit, either for playing or for accessing it prior to launch, and the demo will remain live beyond release.

The demo runs up until the showdown with Gauss, the first rival Altered and some side missions will unlock after defeating Gauss so you will be able to go back and explore the world.

It also includes all four classes and six character slots, allowing you to try out all classes - character levels will be capped to Level 7. This will allow you to earn your class's fourth ability and be able to mix and match active skills. You will also be able to earn two skill points which can be applied to the skill tree. And you can progress up to World Tier 5.

World Tiers are a dynamic difficulty system, so at level 5, your chance for higher rarity gear is increased, but the drop chance for Legendary Gear is still extremely low.

Resources will be capped at a certain amount in order to "safeguard balancing" for when you go into the main game. Resources are mainly used within the crafting system, but they can also be traded for better gear from the armorers. The crafting system unlocks in the full game once you’re beyond the demo content.

One cool thing is you will be able to transfer your progress if you play the main game on the same platform account, but progress will not transfer between the demo on Steam and the full game on the Epic Store. Don't expect trophies or achievements with the demo, but in-game accolades will transfer.

Outriders will release on PlayStation 5, PlayStation 4, Xbox Series X/S, Xbox One, Stadia, and PC on April 1. 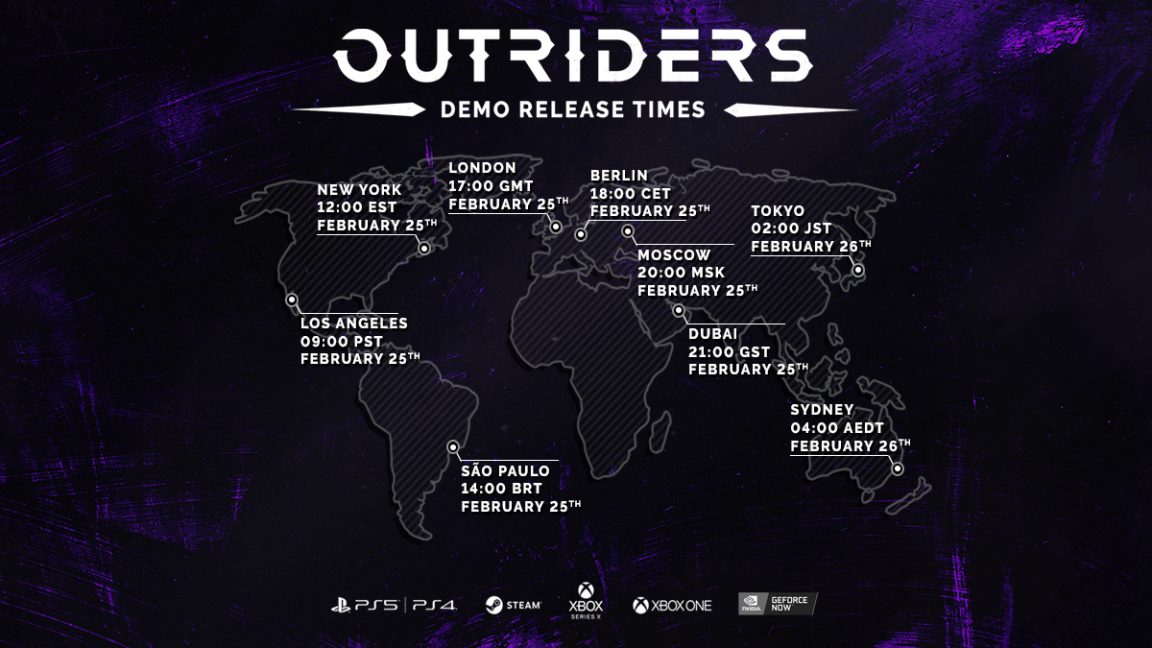