Moon Studios and iam8bit have raised $58,000 for the Rainforest Trust thanks to December sales of Ori and the Will of the Wisps on Switch.

From December 8 to 13, the companies pledged 5% from sales of Ori and the Will of the Wisps on Switch would benefit the Rainforest Trust, with iam8bit pledging $25,000 to the charity.

This week, iam8bit announced $58,000 was raised during that time, enough to protect 29,000 acres of rainforest habitat - a space roughly double the size of Manhattan.

“As the publishers of the Ori series on Nintendo Switch, we could not be more thrilled by the outcome of this drive," said iam8bit.

"Between Moon Studios’ eco-positive storytelling and Rainforest Trust’s incredible work protecting rainforests around the world, we are humbled by the fans that helped us raise $58,000 for Rainforest Trust’s cause, and honored to partner with such an organization.”

Ori and the Will of the Wisps was released on Nintendo Switch back in September 2020, after its release on PC and Xbox One in March of that same year. 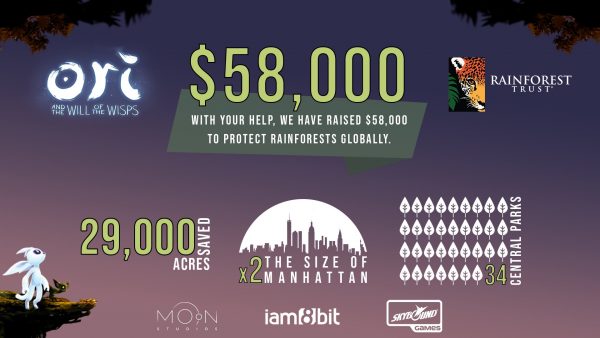