Oblivion launched way back in 2006, but it's still a formidably popular comfort title for a significant amount of Elder Scrollsers - mostly because of how hilariously broken it is.

Oblivion meme videos have populated the internet for over a decade, and yet they never appear to elicit any less laughter. The game is sufficiently chaotic to never lose its unintentionally awry humor - just check out the video below, which perfectly sums up a couple of minutes in the life of Oblivion in 2020.

"Help! Murder!" exclaims Adamus Phillida, who promptly proceeds to waltz about like a confused chicken, cocking his head forward mid-strut like a bass player who is really into the groove. He then walks into a wall, before apparently remembering that he's here because of a murder and is actually supposed to collect a fine off of you.

"Then pay with your blood!" he exclaims. Obviously the player beats him up, but it changes nothing. Adamus Phillida is unkillable, and rises from the dead a la The Undertaker shortly after getting decked. He immediately shouts "to arms!" and draws his sword, before instantly sheathing it again. Then he gets in a fight with a civilian, because why not.

This civilian is actually sound, though. You see, some other do-gooder joins Adamus in trying to arrest the player in the video, but the civilian who Adamus got in a scrap with takes your side and starts beating up goody-two-shoes. It's gone from Adamus walking into a wall to a 2v2 brawl filled with magic and pointy sticks. Then Adamus throws his sword on the ground and decides it's time for a marathon around the Imperial City. Pretty impressive managing to pick up a decent pace with about 700kg of armor on. 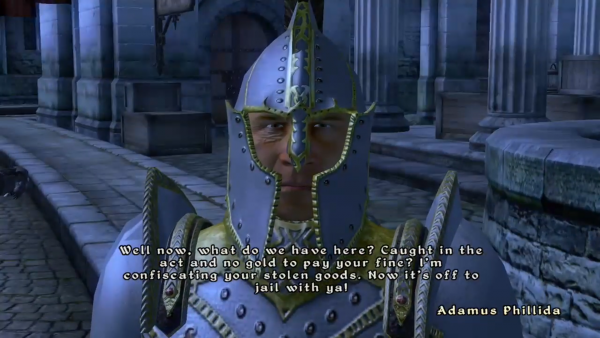 Anyway, like most things in Oblivion, everyone forgets what they're doing at the end. One civilian sheathes his sword and runs off, and Adamus doesn't even really know where he is anymore. Someone calls the player a psychopath and that's that. One minute and 50 seconds of pure, unfiltered Oblivion bliss.

If you're into Oblivion but don't want to deal with how frankly absurd it is, Skyblivion is a full Oblivion remaster being built in Skyrim. If you're more of a forward-thinking type, check out this comparison video of Skyrim and The Elder Scrolls Online: Greymoor.