When discussing controversial games, Hidetaka Suehiro's (adoringly called "Swery" by his fans) twisted survival-comedy horror Deadly Premonition takes the cake. Hell, it’s the Guinness World Record holder for being the "Most Polarizing Survival Horror Game", as IGN completely panned the game and Destructoid exalted it with a perfect score.

Meshing unsettlingly light-hearted jazz with equally unsettling (yet oddly beautiful) murders, Deadly Premonition has garnered a cult following since its release for its unique, well, everything. Describing the game is next to useless simply because there are no games out in the wild like it. Those curious about Deadly Premonition need only to sit down for an hour or two with Swery's eccentric baby to see why it's an experience beyond words.

Recently, VG247 had a chance to speak with Swery and Tomio Kanazawa, the game's producer, about Deadly Premonition: Director's Cut, which brings the game, with new content and updated graphics, to the PS3 for the first time. Kanazawa served as Swery's interviewer.

VG247: Was it the polarizing feedback that caused you to release a Director's Cut? Are there any other reasons why you decided to revisit Deadly Premonition?

Hidetaka "Swery" Suehiro: It was three years ago that it was released. It was originally released in 2010. We couldn't debut this game on PS3 due to some technical issues. We couldn't make the release date. I started working on this project, because I wanted to debut this version for PS3 owners, this time. That's the main purpose.

Tomio Kanazawa: It was the summer of 2011 we started talking about it, this director's cut. Our motivation was to debut this game to new players. That was the start of our concept.

So why not re-release the Director's Cut for Xbox 360 as well?

The original Deadly Premonition, called Red Seeds Profile in Japan, was published by Marvellous in Japan; Ignition in the US; and Rising Star Games in Europe, exclusively for Xbox 360.

Kanazawa: Because it is kind of a technical issue. Actually, we may think about it later. This time our aim was to deliver this to the PS3 owners. That is why we supported the PS Move, specially for the PS3 version. We may think about bringing this to 360 owners as well if this is successful.

What PS Move interactions will there be specifically? What will you be able to do with the PS Move?

Kanazawa: There's combat, so you can aim easily with the new PS Move support against shadows - zombies. It's not only for the combat thing. The player can move their cars or their character in the town with the Move controller, so the player can hold the PS Move all the time - not change controllers. But the main purpose we used PS Move was for the combat, to make it easier than before.

Originally Deadly Premonition released in the US for $20. Why is the Director's Cut releasing for $40?

[At this point, a representative from Rising Star Games stepped in to give pricing details. They explained that the price point had not yet been confirmed. However, because of the extra content that's been added to the Director's Cut, the game will be releasing for a higher price than the original $20.]

When Deadly Premonition was first released it received hugely differing reviews. IGN gave it a 2/10 and Destructoid gave it a 10/10. What were your thoughts on these reviews? Were you hurt by IGN's review? Did you feel that they didn't understand the game? Are you taking steps towards clarifying what your point was with the game in the director's cut?

Kanazawa: Of course he believes that this game is fantastic. He'd been working on this project for more than six years.

Swery: The first review I received from the Western market was IGN's. 20 points out of 100. I was shocked. I was wondering if the things I believed were wrong. I wasn't sure. That was the first impression. I was so shocked about it. But conversely, I received so many comments from core users [players] that this game was fantastic and they'd never played this kind of game. 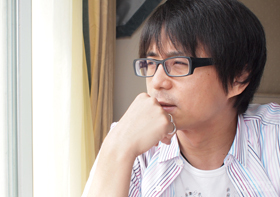 Soon after, I received a very good review from the media. Then, everything had changed. I started receiving so many good reviews from the media, as well. I started thinking, "Of course. What we believed was right." What I had been doing so far had been right. When I received a perfect score from Destructoid it was another shock. So I received two shocks when I received the low score and the high score. Now, both the low score and high score have been very important for the game. I want to thank everyone for all the reviews. Thanks to those different reviews, we received the Guinness World Record, so we have to thank all the reviews.

Videogames are definitely made with commercialism and sales in mind. Deadly Premonition is a very, very different game from your run-of-the-mill AAA game. When you were developing it, did commercialism come in as a factor? Were you worried about how it would sell were you more concerned with making a piece of art?

Kanazawa: Of course he believed this game would become a very fantastic game. Whether or not the game will sell is my - as producer - worry. We had been talking about this project a lot before starting: "We have to make a very edgy game. Something that's never existed so far in the world." I think this is much more important to think about, because it'd be no fun if we created games that were like copies of other games. Our goal is to create a game that's never existed in the world. We never bended this policy until the end.

In a recent interview with GameSpot, you mentioned that there was certain content that was cut from the original game that you wanted to put into the Director's Cut. You were told once again by the publisher that the content was too explicit to include in the game. Do you have any examples of what that content was?

Swery: The content cut from the original, was for example, the FBI Agent [York] running around the town on a bicycle. If the player kept wearing the same clothes, flies would fly around his body. If you change clothes, the flies are gone. But there was a feature with the shower to refresh. But it was cut from the original version. Finally, we didn't bring those ideas to the Director's Cut because the purpose for us to release this game is to expand the user base. We couldn't get this game to PS3 users in the Western market, so we're trying to deliver this world to PS3 owners.

In terms of censorship, Deadly Premonition is obviously a very gruesome game. Japan, the US, and Europe have differing views on what's "acceptable". For the U.S., violence seems to be more acceptable than nudity or sex. For Japan, nudity seems to be a little more acceptable than violence. How did you balance take that in mind when developing the game. How did you balance all these different tastes?

Swery: My first concept was not to give a shock or a scare by phantoms or monsters and these kind of creatures. I tried to give the player a scared feeling through the story or the mystery. I focused on the murders and not the scary monsters. I thought about so many ways of killing, murder, like the shower scene or the museum scene. Sometimes, I got ahead of myself. I had much more violent ideas, but I was told from the publisher not to get more violent. I had to adjust to make it much more milder than I considered [originally].

Did you envision Deadly Premonition to be a survival horror with comedy elements? Or from the beginning, were you more focused towards making purely a survival horror game and during development, it evolved into you adding elements of humor?

Kanazawa: I gave him the first scene, as an open-world mystery. After that, we started talking about adding a horror taste. That was the original concept.

Swery: First of all, I designed the country town. I didn't get to the storyline. I started considering the people that were living in the town. Then, I started creating the storyline. That's why this game is full of sometimes comedy, sometimes horror, sometimes mystery. This was a mixture of all of those things.

After the interview, we spoke with Rising Star Games Phil Robinson about the release window for Deadly Premonition: The Director's Cut. He didn't give an official release date, but said to expect the game to hit shelves in North America sometime in April.

Swery: As I said before, I started designing the country town first. The main character is York - the agent. He must have characteristics against the people living in the town. He must be very odd and he has a very cynical feeling. He must be a complete contrast from those people. That was the start. I started growing these characteristics towards something more edgy. I wanted to make this character more edgy and unique. That's why he's so unique from other heroes from other games. A strong, edgy, character is needed for this game because this is a very unique game. Then, I had the idea of Zach, the other character in my mind. I thought about this in the middle of the night.

Kanazawa: The next day, he called me. I had a very good idea to have Zach. He's a friend he created in his mind. He is actually the player. Zach is the player controlling. He [York] is always talking to Zach and Zach is the player. "Okay, what do you think Zach? Do you want to do that?" He's asking you. "Okay? Let's do that." The relationship is very unique. That was part of the investment in this game.

After the Director's Cut comes out, do you guys have anything planned for the future?

Swery: Now, this is a great opportunity to debut Deadly Premonition to a new audience. After that, I'll probably get another chance to create other games.

Kanazawa: Of course, we are discussing other games as well. He can say expect [other games].

Swery: Other than Deadly Premonition, I can't say anything about what to expect.